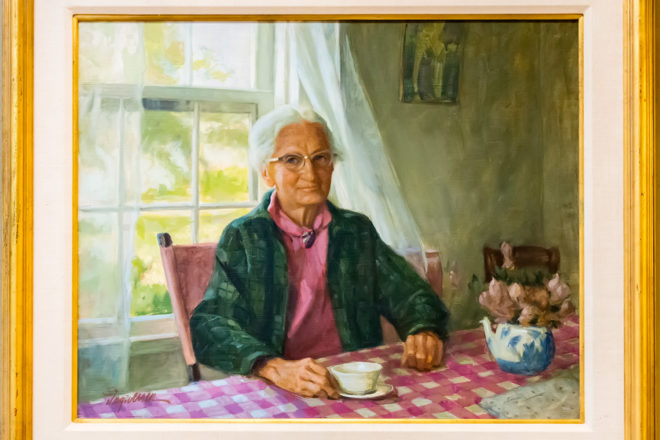 Door County artist James (Jim) J. Ingwersen unveiled his portrait titled “Miss Emma” at The Ridges Sanctuary (ridgessanctuary.org) in Baileys Harbor on Sept. 24. Nearly 40 kindred spirits – who, in their own ways, have all contributed to the cultural and environmental well-being of the Door peninsula – joined to celebrate the unveiling.

Ingwersen’s oil painting of the late Emma Toft, completed in the 1980s, is now permanently installed at The Ridges’ Cook-Albert Fuller Nature Center. Toft was one of the founders, along with Albert Fuller and others, who are credited with saving The Ridges from becoming a campground and trailer park during the 1930s. The painting reminds all who visit The Ridges of the passionate conservationist who was at the forefront of local and regional land conservation.

Ingwersen met Emma Toft through renowned naturalists and longtime Pulse contributors Roy and Charlotte Lukes during the 1970s. Ingwersen recalled visiting with Toft while she and Roy were cooking up ebelskivers (a stuffed pancake of Danish origin) in a cast-iron pan on her wood stove. Over tea, their discussion turned to wetland controversies at the shore and wildlife areas in Baileys Harbor.

“Emma simply grew to represent the conscience of the entire county,” Blei wrote. “Her name is synonymous with the sanity of preserving our natural environment.”

In his writing, Blei called to mind the reverence shown to Toft by students of The Clearing and the lore of her actions to protect the trees from loggers. In his painting, Ingwersen portrayed her having a cup of tea at her kitchen table, just as she was when he first met her.

Admission to the Cook-Albert Fuller Nature Center, 8166 Hwy 57 in Baileys Harbor, is free.