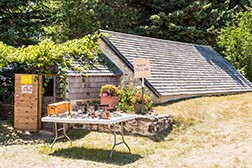 The Erskine Root Cellar during the weekend of Cherry Fest in 2015.

On the August afternoon I visited the Erskine Root Cellar, the interior temperature hovered just above 60 degrees. Outside, it was approaching 80.

An observant person driving through the intersection of County Road V and Highway 57 in Jacksonport might notice a little cedar-shake roof protruding from the soil. I did not. I would have driven past it if not for a large wooden sign on the corner, which said Erskine Rest Area.

Lincoln and Caroline Erskine built the root cellar sometime in the early 1880s, after purchasing a nearby house. The house, previously owned by Lincoln’s brother Royal, had been used as a saloon. Caroline and Lincoln, who were against drinking, had the building converted into a boarding house and post office.

Eventually, the cellar fell into disrepair. The Jacksonport Historical Society restored it in 2003, replacing the cedar shake, many of the wooden boards and the door, and repairing the foundation.

Inside the narrow entryway are several steps down into the cellar proper, which has a shelving area for cans and a wooden stall for vegetables, filled by the Jacksonport Historical Society with potpourri for an enhanced visitor experience. 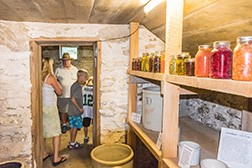 Inside the Erskine Root Cellar in Jacksonport.

This visitor’s first experience was good and very informative. It is a primitive walk-in fridge; with a stone foundation, and cedar shake roof, and a heavy wooden door that is only opened twice a year, for Cherry Fest and Maifest.

The cellar provided a fine reminder to me not to quickly dismiss something as unremarkable and mundane the first time you drive by it.

It is not particularity impressive, but in the 1880s, functioned well. The walls, insulated by soil, and roof, insulated by newspaper, kept the cellar cool, and protected the vegetables stored inside from frost.

Like all good refrigerators, the cellar is cold and dark. Its only purpose is preservation. My mistake, on my first visit to the cellar, was that I failed to recognize that this principle applied to the entire building, including the roof.

Part of what preserves the old refrigerator, which preserves the vegetables, is Marie Erskine Hein, the granddaughter of Lincoln and Caroline who grew up playing around the cellar. She shared some rambunctious childhood memories with the Jacksonport Historical Society:

“My brothers played ‘cops and robbers’ around the root cellar (they were not allowed in it). Many were the times we were scolded and warned not to climb on the root cellar, but most of that went unheeded. If we took a good run we could get right up to the top of the roof and stay on our feet. Then we would sit and slide down. The cellar was covered with a roofing material that looked like tarpaper with very small pebbles glued on. There were no jeans or slacks for girls. We wore dresses with bloomers to match. Twice down the roof we were sliding on bare skin. Many the spankings I got for wearing holes in my bloomers!”