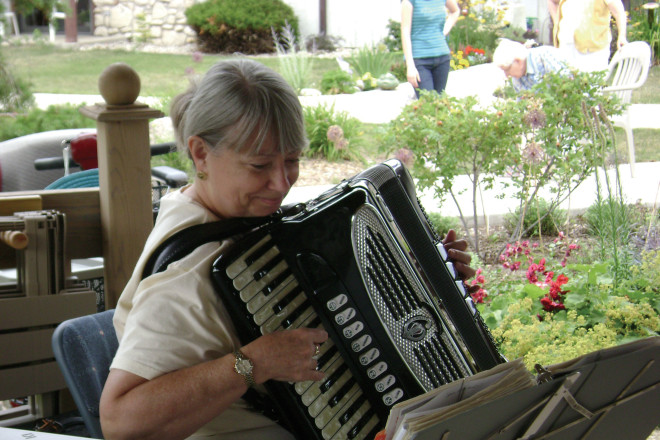 The largest employer in northern Door County has as its motto:  “In Christ’s Love, Everyone is Someone.” The Good Samaritan-Scandia Village’s mission is “to share God’s love in word and deed by providing shelter and supportive services to older persons and others in need.” This senior residence and nursing facility was established by a group of northern Door County citizens 35 years ago when they formed the Senior Citizens Agency of Northern Door or “SCAND,” the now familiar name that not many know is actually an acronym. 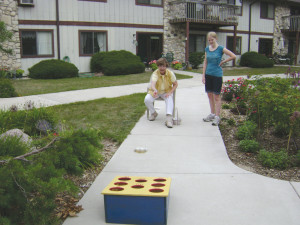 After several years of planning by this group of community stalwarts, ground was broken for a 60-bed nursing center that opened for business in November 1981 with 50 percent occupancy. The original community board of directors literally took money out of their pockets to accumulate enough for the initial fundraiser mailing.

The Evangelical Lutheran Good Samaritan Society based in Sioux Falls, South Dakota managed daily operations of the new center but did not take ownership until 1993 when the growing campus required a more professional leadership presence. According to Michele Notz, Administrator, the regulations for nursing homes are second only to those governing nuclear energy! Management was assumed by the Good Samaritan Society to meet the demand for safe, loving retirement living and health care in northern Door County.

There are wonderful and touching stories within the halls of Scandia Village and none better than that of their new director, Michele, who literally came up through the ranks. A native of Door County, Michele started working at Scand 27 years ago in housekeeping, then moved into nursing assistant, housekeeping supervisor, secretary to the board and apartments manager. When it looked like she could move up further, Michele went back to school with the help of “Good Sam” for the needed training and education for a degree in health care management, and as a licensed nursing home administrator she became Administrator on December 16, 2009.

Michele is ably assisted by a team of management and direct-care staff. Nicki Scharrig sits at her right hand as Marketing and Resource Development Director and together they exemplify the joy, enthusiasm and dedication found in each of the full and part-time staff totaling 112. According to both Nicki and Michele, Scand is a very good place to work. “Cross training” has become an efficient way of serving the community so that staff can float among many jobs – Nicki, for instance, studied and received her degree as a Certified Nursing Assistant allowing her to work in that capacity if needed. One of the driving forces behind the parent company, “Good Sam,” is a commitment to improve through education. Many employees have taken advantage of scholarships and other assistance to increase their status as caregivers for the 180-resident campus.

The original building has expanded bey 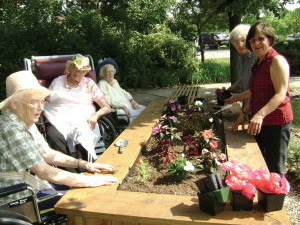 ond the original cherry orchard property and today there are 18 Villas (four-unit condo ranch-style houses separate from the main building for independent living); 58 Meadows monthly rentals, also for independent living; 20 Woodview assisted living units; and 60 Care Center units that require 24-hour skilled nursing care (15 of these are assigned to Birchwood, the Alzheimers/Dementia special care unit). Added to this in 2000 is their state-of-the-art Rehabilitative Therapy Area staffed by therapists from Door County Memorial Hospital and available to the greater community as well. Large single contributions created the Newkirk Chapel in 1990 and the newly-renovated Care Center dining room, the “Judith Blazer Fireside Bistro.” They have a healthy endowment and further expansion is a possibility when the economy recovers.

The Auxiliary and its volunteers operate Bargains Unlimited the second-hand store down the street that is so popular with area residents and a regular stop for tourists as well. “Bargains” is a true recycling center where patrons drop off a donation and end up shopping for other items. It is the ultimate on-going fundraiser for Scand along with the annual drive in the fall of each year.

Both Nicki and Michele agree that next to their staff, the Auxiliary and volunteers (totaling 240) are Scandia’s most hardworking fans. Volunteers sort through donations at Bargains, feed the residents, provide one-on-one friendships, teach, coach, organize, and generally provide energy and happiness to the entire Scandia population. Nicki pointed out that the residents, in turn, give back to the larger community as well. With the help of the staff they have bake sales and potlucks to support outside events like the Alzheimers Walk; some teach at The Clearing; and at the time of this writing a group was preparing for a fundraiser to support Haiti’s recovery from the earthquake.

Several significant programs have brought special attention to Scandia Village. “TimeSlips” for the 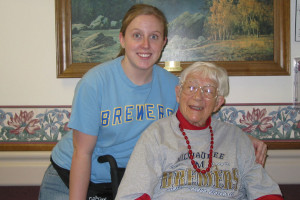 Alzheimer/Dementia Birchwood residents was initiated by volunteer JoAnn Thomas. According to its Web site, “TimeSlips is a creative storytelling method which replaces the pressure to remember with the encouragement to imagine.” JoAnn allowed a group of local actors to work along with her on this project and it culminated in a fundraising production of a play performed at the Door Community Auditorium.

Another special event is the Care Center Christmas Party, a no-holds-barred day of fun with residents, community members, staff and entire families joining in the celebration. Michele smiled and said, “One of my biggest satisfactions and the most heartwarming thing is witnessing the interaction between residents, residents and staff, and residents and volunteers. It really is what we’re all about. We are eternally grateful to our Auxiliary and volunteers because they make all these wonderful extras happen.”

She continued, “It hurts us dramatically when we can’t serve everybody who asks. It’s a heartbreaking feeling when you see people in need and we’re full. We keep it as affordable as we can but that means we are always financially borderline. Our annual fall fundraiser allows us to make small improvements and, just this year, we were able to create several rooms dedicated to Medicare patients who are recovering from surgery and need short-term special care or therapy before they return to their Villa or apartment.”

Providing the “supportive services” mentioned in their mission statement runs the gamut from Clearing classes to a rotating group of ministers for Tuesday devotionals and Sunday services, to the Silver Sneakers YMCA fitness program, to in-house concerts by Midsummer’s Music, to a Wellness Program for staff and residents, to medical support coordinated by Medical Director Dr. Philip B. Arnold of North Shore Medical Clinic, and the list goes on and on. Many of us have visited big city nursing care facilities and experienced how sad and impersonal they can be, but if you visit Scandia Village you will come away impressed, upbeat and thinking perhaps someday you yourself might be a recipient of the passionate love and care found here. In the meantime, think about volunteering! 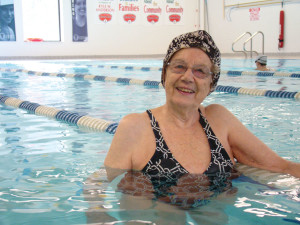 Ilsa Kozma, in her early 80s, is a retired chef. Born in Germany, she and her husband and daughter moved to Waukesha, Wisconsin in 1951. Daughter Brigitte is a respected Door County artist in partnership with her husband, artist Tom Seagard, of the Mill Road Gallery in Sister Bay. Ilsa moved to Door County recently to be closer to her family when her husband died and a Scandia Meadows apartment was the perfect choice for her. She posed for the photographer while doing her daily hour swim at the YMCA where she also participates in exercise classes. 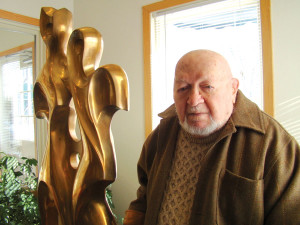 Louis Smolak is 100 years old and a Russian born sculptor. He is shown with one of his sculptures currently installed at the Unitarian Universalist Fellowship in Sister Bay where he is an active member. Louis lives in The Villas and enjoys a second life as senior statesman. His very active mind percolates and he can discuss history, politics, religion and, of course, art with the best of them. Read all about this dapper dresser with a twinkle in his eye in Door Way by Norbert Blei who writes, “Some people around these parts take night courses, read books, and watch PBS. I listen to Louis Smolak.” 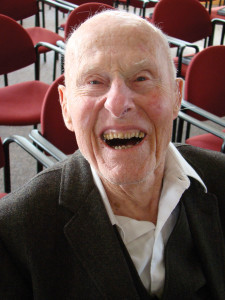 Chuck Berger, early 90s, is the newest Meadows resident of this group and like Louie is an active member of the Unitarian Universalist Fellowship of Door County. He and his family had been coming to their vacation home in Ellison Bay since the middle ‘50s and moved there following his retirement as a chemical engineer specializing in research and development in oil refining techniques. When his home became too difficult to care for, Chuck moved to the Meadows and is very happy to continue his interests in music appreciation and political discussions in this new environment. 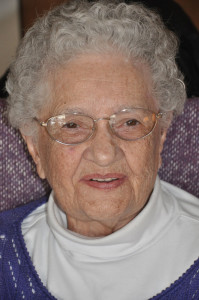 Jean Swanson, in her 80s, retired from social work in the Chicago area and with her husband built a home in Ellison Bay very near The Clearing where she spent many years teaching the Great Books series each winter. Jean is a member of two book clubs and reads voraciously. She loves living at the Meadows after maintaining a large house and garden for many years on her own after her husband died. She entertains regularly and especially loves having her two granddaughters, Rachel and Sara, for occasional sleepovers. 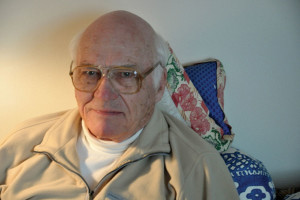 Dr. Hugh Hickey, early 80s, has just formed a weekly poetry group in the solarium at Scandia—reading, not writing he points out. Hugh was a trauma MASH unit doctor during the Korean War and subsequently enjoyed a long and successful career as an orthopedic surgeon in the Milwaukee area. Upon retiring Hugh and his beautiful wife Sue built their dream home in Fish Creek where he was an avid gardener. After his wife died he moved into the Villas and subsequently the Meadows where he is grateful to have all the benefits of Scand and still enjoy his very homey Meadows apartment. 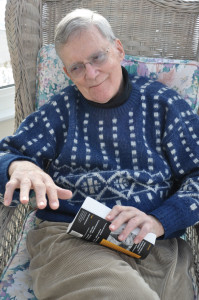 Lee Traven just celebrated his 79th birthday by joining another book club, this time a mystery group. Lee grew up in Baileys Harbor, the son of community activist, Olivia Traven, a founding member of Scandia and The Ridges Sanctuary. Lee attended Lawrence University and Columbia University for his education, and upon retirement from Standard Oil of New Jersey moved back to the family home in Baileys Harbor and continued his mother’s work with his dedication to organizations in the area: The Ridges, The Clearing, Lawrence University, Wisconsin Public Radio and many more. He is happy to be free from the task of keeping up a home and says: “The staff and other folks here couldn’t possibly be better.” 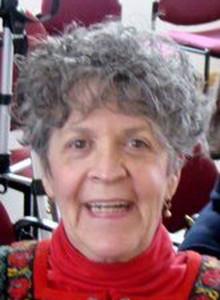 Sheila Sabrey-Saperstein retired as a Northwestern University theatre and opera professor to live in Door County with husband Phil 14 years ago and is happy that she can’t remember what big city living was like. She enjoys writing and photography and occasionally directs theatre within a social context like “TimeSlips,” part of an Alzheimer awareness project, and “Out of the Shadows,” a presentation on sexual abuse and domestic violence. Sheila was one of four founding members for the Isadoora Theatre Company.