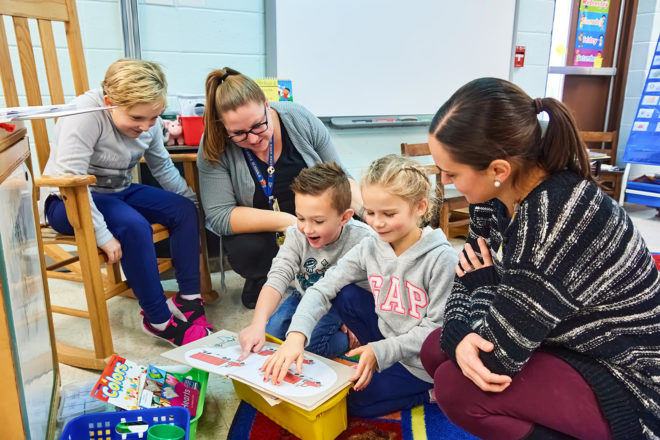 Kayla Schleicher and Emily Heidler check in with a group of K1 students during a reading assignment. Pictured (From left): Lumen Bahrke, Schleicher, Callum Neu, Avery Burress, and Heidler. Photo by Len Villano.

A first look into a multi-age classroom as the first and second grade students came in from recess may seem a little hectic, but for teachers Emily Heidler, Kayla Schleicher and Michelle Daubner, it was organized chaos.

The three teachers instructed students to get into groups of three, pick spots around the enormous classroom and read together. The teachers talked across the room to each other, weaved their way between groups and assisted students with tasks.

Gibraltar Elementary is in their fifth year of having a multi-age teaching program that operates in kindergarten through fifth grade. The structure of multi-age is built around flexibility. Students often interact between grade levels and work in small groups.

For example, students who are particularly gifted in math may work at a level beyond what grade they’d normally be assigned. And if that same student is struggling in phonics, then they can work in another group that is focusing on that.

Daubner said her favorite part of being a multi-age teacher is seeing the students interact with and support each other, even if they’re at different grade levels.

Students in the program do realize that they’re in it because that choice was made for them to enter it, though they don’t necessarily notice it even when divided into groups, Elementary Principal Brian Annen said.

They’re split so organically that it doesn’t define their learning experience. They aren’t divided by ability or grade. Instead, they’re divided into colors, said Jess Farley, whose son Wyatt is in the multi-age program.

Now in fifth grade, Wyatt was one of the first to enter the program and has loved it, his mother said. He has been with the same group of 11 students for five years. Next year, he’ll rejoin the rest of the student population as he enters the sixth grade. That’s an age where students are ready to begin participating in other subjects like band and choir, Annen said.

Farley noted that one drawback of the program could be that transition. While the students have learned valuable social skills in multi-age, they’ve been doing so with the same children. She worries it might be difficult for the kids to make new friends once they begin sixth grade.

“He’s a little nervous about jumping back into the regular curriculum next year,” she said.

That’s a hurdle the district will experience for the first time as their pilot group exits the program next year.

It’s been a challenge to maintain that mix of opportunities for the birth age and multi-age students to work together more, Superintendent Tina Van Meer said, but they are working toward ways to do so.

“You see in a traditional setting, [teachers] do collaborate,” Van Meer said. “We have to set up a time and structure during our day, but it’s not as organic or natural as what you would see in a multi-age classroom where the walls are taken down and you have three or four teachers in one room of kids all day long.”

Emily Heidler was the first teacher to take on multi-age learning, and Daubner followed. Daubner says she enjoys co-teaching, but it’s not for everyone. The two of them, along with Kayla Schleicher, have a great relationship, she said.

Heidler agreed that co-teaching takes the right person, but she likes having help right there in the room with her when she needs it.

The hardest part initially was that teachers can be set in their ways, Daubner said. The three of them had to agree upon what would work for them as a group from the beginning. Now Schleicher said she doesn’t know what they’d do if they ever had to split up.

The program was the brainchild of Van Meer. Before coming to Gibraltar, she spent 13 years teaching in grades K-6. She saw what could happen to a student’s self-esteem if they fell behind or got held back because they couldn’t grasp a concept in a given timeframe. For her, shifting to multi-age classrooms is about removing the stigma and closing those gaps, she said.

“I really wanted it to focus on student’s natural development and learning,” Van Meer said. “Yes, I think it will have a great impact on their achievement and learning, but also their self-confidence and self-esteem.”

Van Meer noted that it may not be intentional, but schools are structured in a way where if a student is unable to master a set of skills in the specified amount of time, then they need extra help.

“Kids begin to think that there’s something wrong with them,” Van Meer said, “or they’re not as smart as their neighbors or their peers. Their self-confidence takes a hit.”

The program was loosely based on the concept of learning that the school wants for their kids, Van Meer said, where teaching is catered more toward the individual rather than a subject. It was up to the teachers to bring the experiment to fruition.

The district began a relationship with Claire Wick, who acts as a consultant for their multi-age teaching. She used to work at CESA 7 (a Cooperative Educational Service Agency that links school districts with the state. That district serves the Green Bay area), and Van Meer has been working with her since her start at Gibraltar. Wick’s job is to work closely with teachers, speak with parents and outline learning targets.

These learning targets or “power standards” advance students through the entire program, not just from year to year. Each student is provided a file that outlines these standards, constantly making notes on it to mark students’ progress. Having these overarching standards allows teachers to look at the whole picture, all the time.

“This is a standard that the whole school does,” Elementary Principal Brian Annen said, who has a background in multi-age teaching. “There is no difference between the multi-age classrooms and birth age classrooms about the standards.”

There is also an ongoing conversation taking place as kids progress and move in and out of the program as needed or wanted. Students are able to exit the program if desired, and students on the traditional track can choose to enter multi-age, most typically in kindergarten or third grade.

Having teachers work with the same group of students year after year also eliminates time spent getting to know a new group, plus they already know where a student lies in their progress and can watch them grow.

Teachers who wanted to get involved played a large role in the formulation of the program. Because they didn’t follow a blueprint for such a program, it was a challenge for them to make it take shape, Van Meer said. They started with a mission and had to ask themselves what it would look like and what the concept was.

“There would never be a ceiling for any child in this program,” Van Meer said.

It’s taken a lot of collaborative work to put the program together, and teachers have put in a lot of hours doing so. Plus, they have to prep for multiple levels at a time.

Multi-age classrooms are providing a life-long set of skills that students can take with them far into the future.

“Think about what we’re teaching them about the real world,” Van Meer said. “We know that in the jobs now and in the future, one of the best skills you can have is being able to work in a team, and being able to collaborate and problem-solve together. And it’s going to be groups of multiple ages and they may not be right here in this environment, they may be in another country.”

The school is looking forward to potential opportunities to implement a similar mindset at the middle and high school levels. But first, they need to examine how their pilot group has grown from it.

“I can’t wait to see when we have a large group of our multi-age students going through the middle school and through high school and seeing how the social work that’s happened here, how does that translate?” Van Meer said.