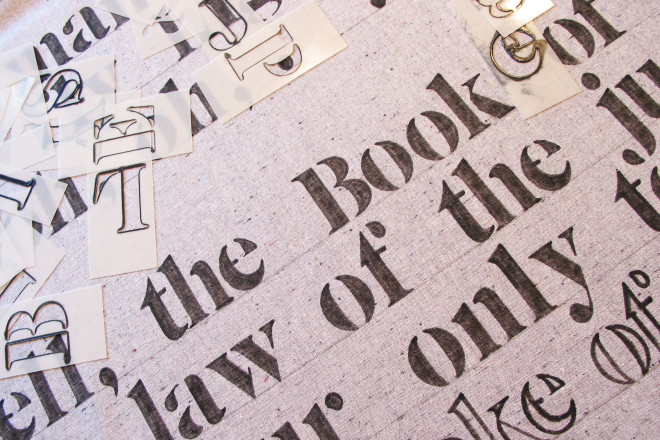 Some projects take time to complete and the 44-song panel installation, “Shakespeare’s in the Alley: A Tribute to Bob Dylan” is one of them.

I first envisioned the project, which is still a work in progress, in 2010. It was then used as the backdrop to two “Buckets of Rain” Bob Dylan tribute concerts: one at Woodwalk Gallery in 2011 and the other at Door Community Auditorium in 2012.

It works well as part of a stage set. I love the collaboration with musicians and all the wonderful energy it creates. The experience at Woodwalk in 2011 was one of the highlights of my life, but the project was always intended as a multimedia visual arts installation. 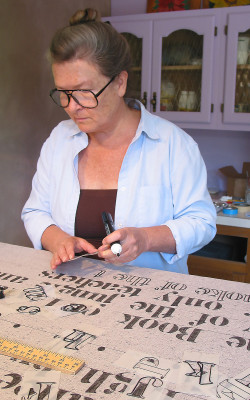 Skye works on the 44-song panel installation, “Shakespeare’s In the Alley: A Tribute to Bob Dylan.” Submitted photo.

In 2011 and 2012, there were 15 song panels. Now there are 44, with lyrics spanning all five decades (now into six) of Dylan’s fascinating and seemingly never-ending career. I ultimately wanted the project to span the entire career of the influential American singer-songwriter. I could have stayed in the ‘60s, but spanning his career has brought a depth and challenge to the project.

The late ‘90s and 2000s have been a wildly creative and successful time for Mr. Dylan. And he is still creating interesting and challenging work. That should inspire all of us. He will be 75 next year. I poured through 700-plus songs and chose the ones that most spoke to me as poetry, as iconic, as grand storytelling, as representing a point in time.

The lyrics have been hand-stenciled, all done by me, onto five-foot wide hemp/cotton fabric. I used 1-¾” and 2” stencils and fabric markers to fill in the characters. They roll like scrolls and range in length from eight feet to 27 feet long. I’m well aware that this project is historical and I wanted to do the painstaking handwork.

The work grew out of my rediscovery of Bob Dylan back in 2008. I was really more of a Beatles fan in the ‘60s. I was only 13 when Dylan had his motorcycle accident and dropped out of sight. But in 2008, I saw the film No Direction Home, produced by Martin Scorsese and it struck a deep chord in me. I was off and running.

I began collecting Dylan’s studio and live performance albums, and during daily walks in the fall of 2009, began envisioning the project. In early 2011, the panel project and Buckets of Rain converged and with a deadline, so I was able to get the ball rolling.

I have to thank Jeanne Kuhns, Pat Palmer, Margaret Lockwood and Allin Walker, [then] owners of Woodwalk Gallery, for believing in this project four years ago.

My background is in stone sculpture (1987-99) and then I created a soft sculpture series from 2000-01 before collaborating with my husband, designer and fiber artist Peter Ciesla, in our business, Bazyli Studio. 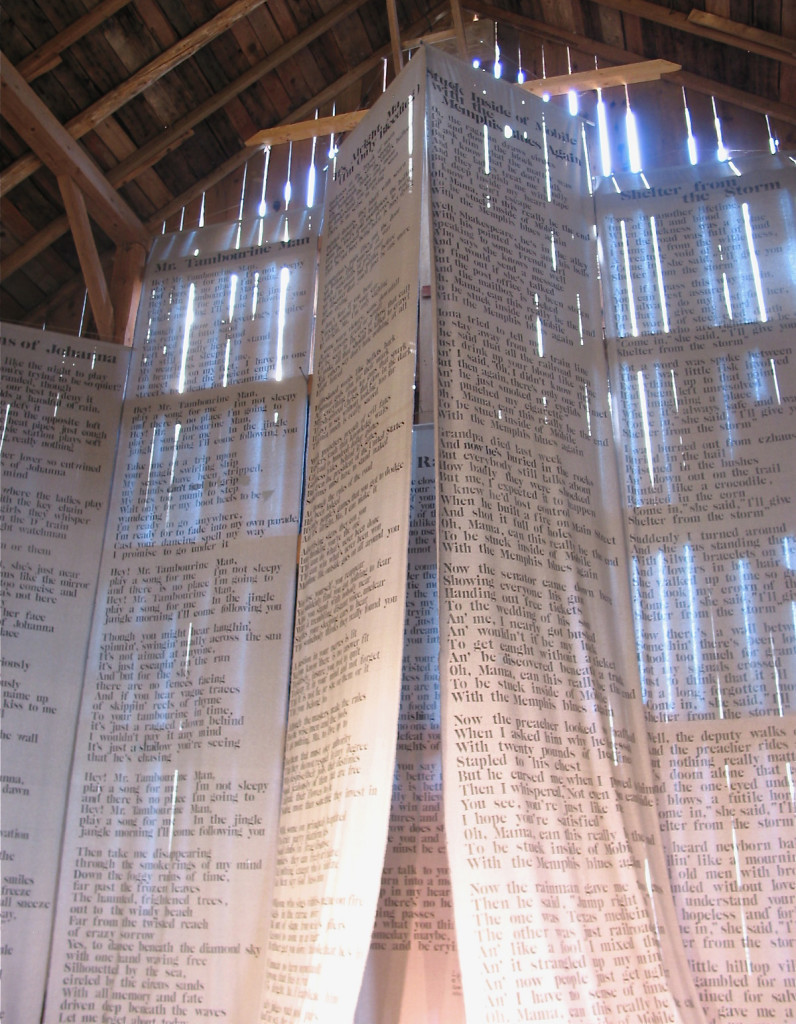 Together we design and create unique bead-embroidered jewelry that has national recognition. Currently, we own and run our seasonal destination gallery, Bazyli Studio Wearable Art, in Baileys Harbor. There you will find jewelry, Peter’s clothing designs, my sculpture, the Dylan Project, and more.

The Dylan installation is still a work in progress. I hope it will one day travel the world as a genuine tribute to a great artist but in the meantime, it will have its first public showing at Woodwalk Gallery from Oct. 7 – 19. The exhibit will also include some of Peter’s Bob Dylan-themed clothing designs.

An artist reception for the tribute project will be held Oct. 10 from 4:30 – 7 pm at Woodwalk Gallery, 6746 County Road G in Egg Harbor. The reception will include a performance of Dylan songs by Mark Raddatz and Jeanne Kuhns. For more information, call 920.868.2912.