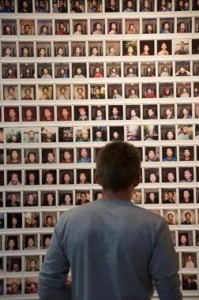 Throughout my childhood years, I was required many times by elementary and junior high art teachers to create self-portraits. The process was simple – look in a mirror and sketch yourself – of course, the final product was always slightly awkward:  a pea-sized nose, eyes that spanned from my nose to my ears, or my personal favorite, fish lips.

At the Peninsula School of Art’s Guenzel Gallery, the current exhibit, “Flickers of Recognition:  Technology and the Self Portrait,” proves that the art form has come a long way since my early attempts.

According to Kay McKinley Arneson, Director of Marketing and Exhibitions, the gallery had wanted to bring in cutting edge media, and Daniel Shiffman’s work that she saw on display at the Telfair Museum in Savannah, Georgia last year inspired her to put an exhibit together.

She says, “I stood in front of these large screen TVs and saw my portrait emerge, and I thought ‘Oh my God this is it.’ Daniel’s work inspired me to create a whole exhibit.”

Shiffman’s work includes two different computer programs, Vornoi and Swarm, that allow the audience to stand in front of a large screen television with a camera attached and watch their own self portraits emerge.

As you stand still – with emphasis on the still part – Vornoi creates your self-portrait by using mosaic like pieces. They move around, emerge and the end product is what I would imagine I would look like on a stained glass window.

Vornoi seems like a simple enough concept. Swarm, on the other hand, is a bit more complicated in theory.

This program is described by Shiffman as an “interactive video installation that implements the pattern of flocking birds as a constantly moving brush stroke. Taking inspiration from Jackson Pollack’s ‘drip and splash’ technique of pouring a continuous stream of paint on to a canvas. Swarm smears colors captured from live video input, producing an organic painterly effect in real time.”

Alongside Shiffman’s work is that of Marc Tasman, who began his Poloroid a day adventure almost 10 years ago. In an exhibit about technology, it was surprising to find the Polaroid camera as a medium; however, Tasman reminded me of a time before digital cameras. When he started the project in 1999, the self-proclaimed “instant gratification junkie” says the Polaroid was the only way he could see the picture immediately.

With less than two months left until he reaches his 10 year and one day goal, he has over 5,000 Polaroid snapshots of himself documenting every day of his life for the past 10 years.

The project came from Tasman’s days as a grad student at The Ohio State University. He wanted to analyze his performance in everyday life, paying particular attention to what was natural and what was contrived.

Tasman says, “I thought this was a great way to document how many different versions of myself there are.”

There are others who have started the picture a day project; some even say they will do it for the rest of their lives. However, Tasman looks forward to the next adventure.

“I reject the notion that as an artist you can continue to make work without a moment of reflection. I want to be able to stop taking the Polaroids,” he says. “I want to be able to reflect on them and think about other things I can do with about 5,000 photographs.”

Of this chapter of his life closing, Tasman says, “I’m really actually excited…[but also] kinda worried that I’m not going to know what to do with myself right away.”

Tasman’s hope for the portrait a day project is that the audience is struck by “the awesomeness of now.”

Renato Umali also presents his version of the self-portrait a day project. However, he has a different goal. Umali set out to challenge the cliché “you learn something new every day.”

He started his project around the time of the 2000 elections and wanted to track why he felt the way he did about issues and various politicians.

Umali took a picture of himself every day for the last nine years and documented the most interesting thing he learned each day in hopes of discovering where his interests lie. He admits most of the time, the most important thing he learned was a lady’s phone number.

Along with a computer set up that displays a loop of his photos with his statement about the most interesting thing he learned that day, Umali also displays three framed graphs representing what he thought about most, including one focused on politicians.

While the portrait-a-day projects used still imagery, A. Bill Miller’s self-portrait is animated. Miller’s self portrait evolved from a series of drawings recreated from memory. His piece shows how he sees these seemingly geometric sketches as relating to himself by including them in a sequenced, rotoscoping animation.

Barany, who is most known for his 70 lb. weight loss video on YouTube, which has received over 100,000 hits, incorporates parts of this video into his final piece. Other aspects of the artist’s work that form his video self-portrait on display for “Flickers of Recognition” include his satiric look at the artists’ statement. 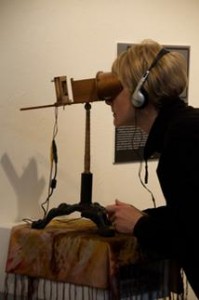 Barany explains his video as delving into “the emotional layers of my intrapersonal self, while dramatically challenging the viewer to question their own definition of ‘self.’”

Barany continues, “By displaying my talents alongside my self-consciousness, I attempt to expose my true self – a complete self portrait.”

Another example of Barany’s work is a piece that combines a Victorian stereoscope and headphones, combining old and new technology. From the stereoscopes, the viewer is treated to Barany’s opera performances in a 4-D experience.

Cathy Hoke-Gonzales, Executive Director, hopes visitors to the gallery take something away from “Flickers of Recognition.” She says, “I am hoping that people, one, take away from this exhibit the possibilities of digital media and art….I also hope they take away the feeling of how amazing it is in a place like Door County to be able to have access to these types of media and artists.”

Flickers of Recognition will be at the Guenzel Gallery through July 16.

The Peninsula School of Art’s Guenzel Gallery is located at 3900 County F, Fish Creek WI, 54212. The gallery is open Monday through Saturday, 9 am – 5 pm.