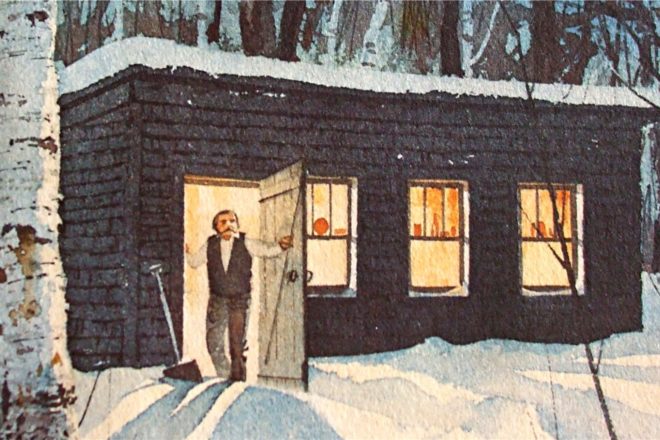 It was January of 1986. My husband Bill and I brushed the snow off our Plymouth Volare and drove up to Door County, escaping Milwaukee for the day to enjoy some open country and fresh winter air. Destination:  Al Johnson’s Swedish Restaurant in Sister Bay. It was mid-morning when we arrived at the restaurant, and we were seated immediately at the little table-for-two just inside the dining room to the left. There were customers, of course, mostly locals, but Bill and I felt like we had the place to ourselves. It was a nice contrast to the noisy, hectic atmosphere of the high summer season at Al Johnson’s.

Just as I was finishing a big plate of the always-yummy Swedish pancakes served with strawberries and a mountain of whipped cream, Al Johnson came over to our table to say hello. Bill and I were excited about our brand new VHS camcorder, and I told Al Johnson that we were going to “make a movie” about Door County. “Oh, you’re making a movie!” he said with a laugh. Then he tilted his head toward the counter on the far side of the dining room and said,“There’s someone over there you should meet.” Bill grabbed the camcorder and followed behind me as Al Johnson moved chairs to make room for my wheelchair. (I had polio at age four, more on that later.) A handsome man with a bushy moustache turned around as we approached, and Al Johnson introduced me to Norbert Blei.

The new camcorder was the focus of the conversation among the morning coffee group which now included me, my husband Bill, Johnson, Blei and Bob Brandriff, who was also seated at the counter. Blei seemed really interested in the workings of the camcorder. Bill handed it to him. Brandriff said he had a funny story to tell about his friend’s experience with a camcorder, so Blei began to videotape him, balancing the bulky contraption on his shoulder, squinting into the eyepiece, while I whispered instructions from the side. When there was a pause in the story, Blei lowered the camera without hitting the stop button, and Brandriff said loudly “but that’s not the end of the story!” Up came the camera. The crux of the story was that Brandriff’s friend had returned a camcorder to the store, forgetting that it still held a VHS tape which contained some “rather private” footage. We all laughed.

When I asked Blei if we could interview him for our movie, he said “Sure. Come on up to the coop.” Of course, we took him up on the offer. Later that day, Bill set up the camcorder on a tripod inside the coop, and I sat quietly in my wheelchair as Blei told us about his trilogy of books on Door County:  Door Way, Door Steps and Door to Door.

It was dead-of-winter quiet in the little writer’s studio which had been a chicken coop in a previous life. The only sounds were Blei’s voice and the soft whirring of the camcorder rolling. While he spoke I perused the eclectic collection of items surrounding us:  stacks of books on the floor, smoking pipes on a table, a crucifix hanging on the wall along with other religious artifacts, photographs, postcards, newspaper articles, magazine covers, and artwork (some done by the writer himself). I just used the word “eclectic” to describe the contents of the coop. It’s a good word, but it doesn’t describe how I felt while sitting so close to this writer, inside his sanctuary. I felt grateful for the intimacy of the setting, as if I had been granted permission to read his personal diary.

Blei nodded his head to indicate that he had finished, and Bill hit the stop button on the camcorder. Evening was fast approaching, and my husband and I had to get back to Milwaukee. Before we left, Blei told us: “Be sure to meet Uncle Tom the next time you come up.” As Bill backed our Plymouth Volare slowly down the snow-covered driveway, Blei stood in the doorway of the coop, one hand raised in farewell.

And that’s basically how this Northern Door Scrapbook project got started. One person would lead us to the next. Al Johnson introduced us to Norbert Blei, who became our first interview. Norbert Blei led us to Uncle Tom Collis in the Old Newport Schoolhouse, and so it continued.

Bill and I interviewed Uncle Tom a few weeks later. That was before most buildings were accessible to people with disabilities. I got out of my wheelchair and crawled on my hands and knees up the stairs inside the old schoolhouse. Bill carried the empty chair up the stairs and helped me back into it. Uncle Tom had not witnessed any of this, and he was totally amazed to see me sitting in my wheelchair when he appeared from a room in the back. He took my hand and shook it vigorously, bending down close to get a good look at me. That was the first of many visits to Uncle Tom during the next couple of years. No trip to Door County was complete without a stop at the old blue schoolhouse. And Uncle Tom always made a big deal about me crawling down the stairs to the basement (in summer), loudly proclaiming the feat to anyone who was in the candy shop at the time. I didn’t mind. I’ve never been shy.

I grew up in Menasha. In 1955, at the age of four, I contracted polio, along with my younger sister Patty and older brother Gary. We were all quarantined for weeks at Theda Clark Memorial Hospital in Neenah. Patty and Gary recovered completely, but my legs were paralyzed, and I haven’t been able to stand or walk since. In 1957 I was chosen to be the March of Dimes polio poster child for the state of Wisconsin. (I was kinda cute back then.) The picture shows me, standing with the aid of crutches and leg braces, with Duncan Renaldo, “The Cisco Kid,” who was visiting children’s hospitals around the country.

My husband Bill died in 2002, following a brief battle with prostate/bladder cancer. We had always wanted to take all those old VHS videotapes and finish our Door County movie. I have never been tech savvy, so learning how to convert these old tapes to DVD format and edit them was like going back to school for me. It wasn’t until this year that I got serious and began to capture and edit the footage into a cohesive 90-minute movie. People featured on the DVD include Ann Miller, Don Buchholz, Dan Peterson, Charlie Voight, and Norsk woodcarver Phillip Odden, along with the following people who are no longer with us:  Roy Lukes, Al Johnson, Norbert Blei, Uncle Tom, Sam Subin, Bea Landin, Washington Islanders Helene Toussaint and Bibbs Rusing. I have ended the DVD with an “In Memoriam” section honoring them, complete with birth/death dates, photos, text and music.

For me, finishing the Northern Door Scrapbook: The Lost Tapes DVD was not so much a bucket list accomplishment as it was a promise kept.

Anyone interested in obtaining a copy of  Northern Door Scrapbook: The Lost Tapes can contact Moore at [email protected]