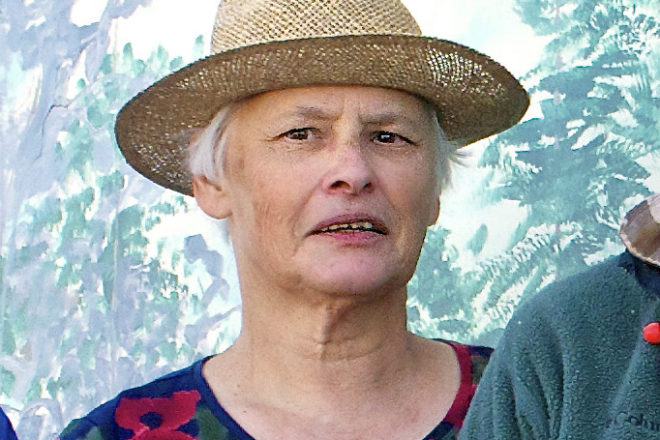 Door County is home to at least four poetry-critique groups and a number of “renegade” writers. The county is also well represented in the Wisconsin Poets’ Calendar and boasts 17 poets in the 2019 edition.

The Door County Poets Collective was formed in 2014, and in May 2015, it published Soundings: Door County in Poetry. Estella Lauter, Door County Poet Laureate 2013-15, spearheaded the project, and Sharon Auberle’s photographs are included throughout the volume. The collective continues to provide avenues for poets to “get their work out,” both within the county and beyond. The partnership with the Pulse will serve readers a wide range of poetry to enjoy.

Each April the Meadows Art Gallery at Scandia Village in Sister Bay hosts poets who have written to a theme. In 2018 the theme was “Entangled,” and more than 20 poets had their works pinned to the walls in an exhibit curated by Tom Seagard and Francha Barnard. Nancy Rafal’s poem, “Twists and Turns,” was one of them. She then submitted it to the Wisconsin Writers Association Jade Ring Contest in the poetry category and came away with third place and publication in the association’s 2018 Creative Wisconsin Anthology.

Rafal gets positive feedback when she reads the poem to groups because “everybody has had the experience.” The work is a prose poem, a form that is written in paragraphs but has poetic elements.

At a concert in Ft. Atkinson I met Barbara who is friends with June. June is a friend of Judy’s. More years past than I care to think of Judy and I went to the same Milwaukee grade school. We both went to movies at the Oriental Theatre. Ed now goes to the Oriental, probably with his girlfriend, Sylvia.

A different Sylvia was a friend of Harry’s but she married Roger and they moved to New York City about 25 years ago. The only person I know now in New York is David but I don’t have his address. He left teaching to become a computer programmer and is probably doing quite well. Another David moved to Wall, South Dakota. He is friends with Roger (not the one married to Sylvia) and with Rolf.

An acquaintance, Rich, was just in the local paper for doing his 33rd Birkie. I know another Rich who is a chair caner and he knows Linda who canes chairs in Hot Springs Village. I went to New York with a different Linda some 15 years ago where we met Leroy. But not the Leroy from grade school who let the air out of the teacher’s tires. Linda and I went to San Diego last year where I spent some time with Phyllis. I went to high school with Phyllis. Our good friend back then was Joan who became a minister. Joan married Pete. My cousin’s nickname is Pete and he lives in Arizona, I think. He’s really named Paul. In the ’80s I had a student named Paul. He’s now a local fishing guide, knows his walleyes, and lives about six miles from here.

Nancy Rafal is an advocate of poetry who lives in Baileys Harbor.