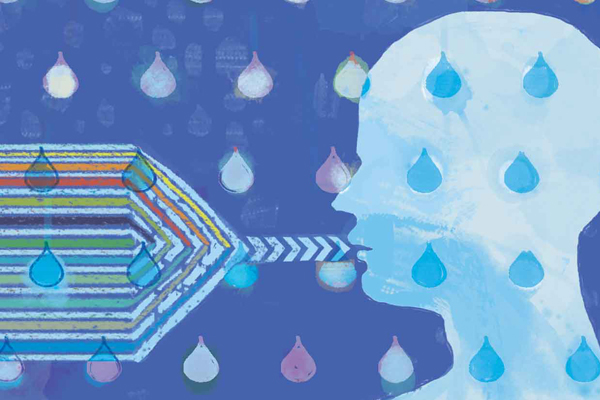 In Door County, a peninsula particularly vulnerable because of its karst topography, one major water contamination incident could spell doom for an economy whose driving force is the tourism industry.

That’s why, in early 2015, a group of community leaders came together to develop Healthy Water Door County, a component fund of the Door County Community Foundation that invests in projects that promote healthy water in the county.

“Our entire identity is based on this being a place that you want to visit because it’s a beautiful place, it’s natural beauty, it’s such a verdant community in which we live. What happens if that’s damaged in some way?” said Bret Bicoy, president of the Door County Community Foundation and a member of Healthy Water Door County’s Board of Advisers. “We are particularly vulnerable because of this fracturing in the bedrock and our very shallow soils so if we’re not hyperaware of these kinds of things, we’re putting ourselves in a bad position.”

Within weeks of its launch, the fund was charging forward with its mission. Its first major initiative was awarding a grant to the Environmental Research and Innovation Center at the University of Wisconsin-Oshkosh for a countywide well monitoring program testing for arsenic, bacteria and nitrates.

During two weekends in June 2015, the center distributed free water-testing kits at three pickup locations on the peninsula to any resident who wanted one. By the end of the second weekend, more than 500 kits had been distributed and returned for testing.

Bicoy said the program’s purpose was twofold: to provide a needed service to the community and to give water scientists and policymakers a snapshot of the community’s water quality.

Individual well results were not shared with anyone but the homeowner, but the Environmental Research and Innovation Center (ERIC) did aggregate the data and supply it to the county.

“As we do it again and again and again, we’ll be able to see, okay, on really rainy event years what happened? On really dry years, what happened? Where do we see clusters of different contaminants, did we see movements?” Bicoy added. “That data, longitudinally, will actually become really useful to the scientists. And then we want to make it available to the public policymakers as well.”

Greg Kleinheinz, Viessmann Chair of Sustainable Technology and professor of Environmental Engineering Technology at UW-Oshkosh, was among the water experts conducting the tests last summer.

Kleinheinz is well aware of how important collecting ongoing data is, especially in an area as vulnerable as Door County. For the past 15 years, he has led the county’s beach testing program (a partnership between the Door County Health Department, UW-Oshkosh and the Department of Natural Resources), among other smaller projects.

“If you do this [well testing] for a few years, what you get is a countywide baseline of here’s what you want to think of as normal, so if something changes down the road, people don’t have to wonder, ‘Maybe it’s been like this for 50 years, we just never looked at it,’” Kleinheinz said. “Now they can understand what a change might mean or what it might look like within the county, where before there was no systematic large set of data that they could look at.”

After last year’s encouraging work, Healthy Water Door County has awarded a second grant to the ERIC to do more well tests this summer. While both Bicoy and Kleinheinz have ideas for potential changes – expanding the dates among them – their main goal is to make it as widely available to Door County residents as possible.

“The reality is that Door County has to be more vigilant about threats to our water quality both because economically it’s threatening to us and also because we are more vulnerable because of the unique geographical features of our community. Our health is more vulnerable,” Bicoy said. “The good news is that in the typical Door County way, we are. Whether it be the beach testing that was created, whether it be Healthy Water’s creation, all these kinds of things are started because the people of Door County, maybe it’s because we live on the peninsula at the end of the road. We’re part of Wisconsin, we’re happy to be part of Wisconsin, but we’re also out there on an island in some ways. Nobody passes through Door County, you’ve got to come to Door County. I always felt that that sort of gives Door County a ‘We’ll take care of it ourselves’ thing and I think that is just another example of our doing that.”