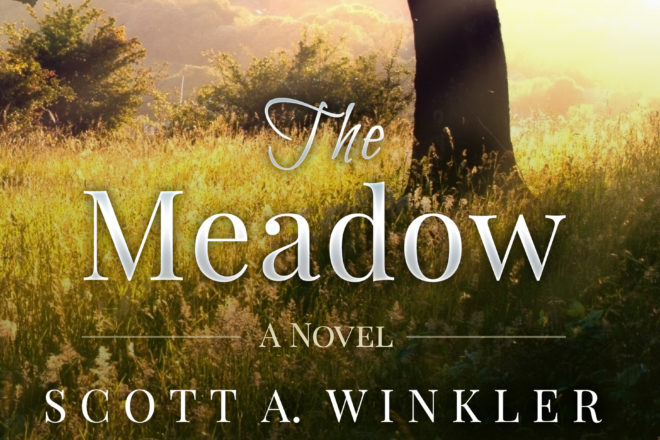 The traumas of war, expectations of family, and the consequences of long-held secrets are explored in energetic, poetic prose in Casco author Scott Winkler’s debut novel, The Meadow.

Set in the late 1960s, this work of historical fiction follows a young man, Walt Neumann, as he navigates the conflict between his personal dreams and his father’s expectations. Written in first-person journal format, The Meadow begins on Memorial Day 1968 as Walt watches his father lead the VFW honor guard. In his mind, he wrestles with the upcoming Vietnam War draft and his father’s desires.

“[Walt] wants no taste of Vietnam whatsoever,” Winkler said. “He’s very much opposed to the war. Walt hates the war, doesn’t want to serve in it but his father is the polar opposite. Otto is someone who had fought in World War II and thinks that it’s an obligation to serve your country when the need is there.”

Walt is able to avoid military service when an unexpected injury on July 4 – his personal independence day – defers him. But happiness proves elusive for Walt, as tragedy reveals long-held familial secrets that Walt and those around him are forced to reckon with. Punctuated by significant historical dates – Memorial Day, Independence Day and Easter – readers follow Walt on a journey to healing.

Winkler began writing The Meadow in 2005 as his creative dissertation for his doctoral degree at the University of Wisconsin – Milwaukee. At the time, he had been studying the impact of war on servicemembers, their families, friends, communities and, by extension, their nation.

“There’s a fair amount of autobiography in it,” Winkler said. “I myself was never involved in the military. My father had fought in Vietnam so I guess that always creates some questions and gets some speculation going.”

Winkler took a brief hiatus from the book a decade ago, but was inspired to return to it following a convergence of significant events:  the death of the college professor who encouraged The Meadows evolution, news reports on suicide rates of American military personnel, and Winkler’s own experience seeing off his military-bound former students (he teaches English at Luxemburg-Casco High School).

The power of narrative plays an important role in The Meadow, as invisible wounds are resurrected and confronted by those affected by their war-torn past.

“I was intrigued by the idea:  what had Walt’s father seen, what had he experienced, and what was he keeping under wraps?” Winkler said. “That idea that moral injury and invisible wounds are things that you can either try to run away from or you can try to bury them but they’re either going to catch up with you or they’re going to push their way back up to the surface and they’re going to have to be dealt with.”

With the publication and release of The Meadow on April 27, Winkler hopes to encourage dialogue among those affected by war and trauma.

“It’s okay to share stories,” Winkler said. “Find people that you believe will listen to you and know that there are people who will listen. By sharing your stories, you can save your life. You can save the lives of those around you as well. I’m a big believer in the power of narrative and I think it has multiple ways to save lives. I’m hoping that this is a book that can do that and that the characters in this book will continue to do that because I do see it as the first of three books involving the bulk of the characters that you find in The Meadow.”

Two excerpts from The Meadow won top honors in fiction as part of the 2016 and 2017 Hal Prize poetry, prose and photography contests, presented by the Peninsula Pulse.

The Meadow was released April 27 by Peregrino Press and is available to purchase on Amazon and scottawinkler.com.