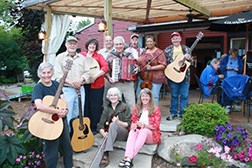 Door County, in its expansive nature, has a unique way of hiding some of its most creative musicians. Most of the time, it is in the way of small groups whose performances are merely jam sessions serving as the musical backdrop for local cafés and pubs.

For the Door County Folk Alliance (DCFA), that happens to be its twice-monthly Irish Folk Music Jams at Kitty O’Reilly’s Irish Pub in Sturgeon Bay. The jams encourage anyone interested to show up with instrument in hand and enjoy a variety of Celtic music.

The Irish Folk Music Jams have been a regular part of Kitty O’Reilly’s event schedule since it opened a few years ago. It was inspired by traditions in Ireland in which musicians gather at pubs at a scheduled time to engage in informal sessions with no set musical program.

“When Kitty O’Reilly’s opened as an Irish pub in Sturgeon Bay, we decided we should start holding sessions there,” recalled DCFA Vice President Nelson Whyatt.

“The purpose is simply to get together to enjoy playing music and to build a community of people who can maintain and share in this old and wonderful tradition,” Whyatt said.

The alliance has recently started expanding its locations for the Irish Folk Music Jams. On Jan. 7, it will gather at Kitty O’Reilly’s from 7 – 9 pm and on Jan. 10, will jam at Starboard Brewing Company, 151 N. Third Ave. in Sturgeon Bay, from 4 – 6 pm. If all goes well, DCFA may continue to follow that schedule in proceeding months.

Another quiet tradition the alliance enjoys sharing with the community is its multiple barn dances hosted throughout the year. A barn dance is an informal gathering for people of a community to partake in traditional group dancing. Whyatt explained that in some parts of the United States, this is primarily considered square dancing. But DCFA’s barn dances lean toward contra dance (often referred to as New England folk dance) where two lines of dancers face one another.

“Each dancer starts with a partner, but the dance patterns are such that you dance as a group, not just with a partner,” Whyatt explained. “In ‘mixers,’ everyone ends up dancing with everyone else sometime before the dance is through.”

If the thought of group dancing alone brings back elementary school memories of dreaded square dancing (and the inevitable nervous stumbles) in gym class, Whyatt is quick to point out that all dances are explained by the caller, an individual who teaches the steps at the beginning of the dance, gives the dancers a chance to practice, then calls out the dance after it starts.

DCFA’s dances also include some square dancing and some circle dancing, though all the dances are done to the live music of alliance band Sugar On the Floor. There are typically at least nine monthly community dances held throughout the year in the old dance hall behind the Institute Saloon on Highway 57.

Barn dances have been a mainstay of the Folk Alliance since its inception in 1995 by the late Cy Rosenthal of Sturgeon Bay. Following his goal of building community through traditional music and dance, the alliance has since put on more than 100 dances throughout the county.

“Our dances are community oriented and family friendly and we encourage everyone to come join us,” Whyatt said.

No experience or partner is necessary to participate in the dances, and as the old Zimbabwe proverb states, “If you can walk, you can dance.”

For more information on the Door County Folk Alliance, its Irish Folk Music Jams and its barn dances, visit DCFolk.com or find them on Facebook. To be added to its email list, send an email to [email protected].