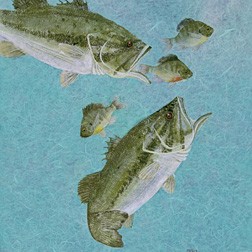 “Mine” by Bonnie Warecki was created by using Gyotaku, or fish printing, a Japanese technique.

For centuries American sportsmen have been mounting their most treasured catches. Instead of eating these whopping fish, they preserved them for memories’ sake. Monstrous bass, salmon, pike, trout, catfish, walleye and muskellunge are stuffed trophies often reduced to a den or the basement.

Since the mid-1800s, however, the Japanese have been doing something inventive, classy and artistic by way of preserving the memory of a great catch. Gyotaku, or fish printing, was originally a simple black and white rubbing. This gave anglers a way to record their catches, and they often presented the print to the owner of the tackle shop where their bait was purchased. The Gyotaku method documents the fish in great detail, and still allows for consumption of the fish. Fish inking soon expanded into color and became an art form.

Bonnie Warecki, a local Door County artist, discovered Gyotaku while “snow-birding” in Florida. A long-time fisherwoman, she knew that inking would provide her with a creative outlet that revolved around her passion for fish.

“When I saw Gyotaku, I knew I had to learn how to do it. Just seeing it – I knew it was for me,” Warecki said. “My whole family loves to fish. My son and husband are both charter captains. Before that we did some commercial fishing, so we really got involved in the culture.” 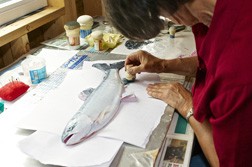 Bonnie Warecki applies acrylic inks to a fish at her home studio in Baileys Harbor. Photo by Len Villano.

Warecki continued, “I also have a fish farm in Stevens Point where we have developed a Floating Race Way system for raising high-density fish. I have learned a lot about fish and their habits through raising them. I’ve got fish in my blood!”

Warecki began taking classes from renowned Gyotaku artist Heather Fortner, who was introduced to fish inking in Hawaii, where she grew up. Fortner became a Merchant Marine Officer and spent the majority of her career on the high seas. During that time she had the good fortune to work in Japan and has since printed fish from all over the world.

Fortner and Warecki quickly bonded over their love of fish, and became good friends. Both women share a passion for fish inking and an artistic vision – now they also share tips on color, technique, and fish habitats.

Fortner said, “Bonnie has a wonderful background because she raised fish and is a fisherman. She has a very unique perspective of fish and their habitat. Bonnie does beautiful work, and she pays a lot of attention to her fish. She’s very passionate about the accuracy of the colors and the shading.” 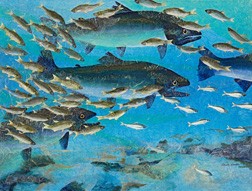 “Under the Baitfish Balloon” by Bonnie Warecki.

All fish can be printed, but some lend themselves more easily than others. There are specialized techniques that you use for each kind of fish. The basic method for using Gyotaku, according to Warecki, begins with inking the fish. The fish must have the right moisture content – for the best results it cannot be too dried out, or too wet. Next, Warecki lays rice paper over the top of the fish, and carefully rubs the ink off using her fingers.

“I get a reverse image,” Warecki said. “I try to achieve all the detail of the fish. I use many of the colors I see on the fish, but you don’t have to. I like to use different colored inks and really detail the coloring with the first printing, which is more time consuming.”

Warecki tends to get more detail with oil-based ink. She uses a “tapping tool,” a cosmetic sponge on top of a stick, which she dips into the ink. Then she taps the fish according to the colors she sees.

“It’s pretty methodical going down the fish, from the head to the tail, or tail to the head. You want to cover it all, and not let the paper slip at all or the image will be blurry. I try to get scaling. Fish with larger scales are easier, such as bluegill, croppy or perch,” Warecki said.

If you use a water-based media, the fish can still be consumed after taking the rubbing. The Japanese finished their black and white print quickly, so the fish would be very fresh and ready to eat. 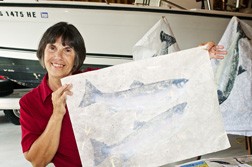 After carefully pressing Unryu paper to the fish, Warecki shows off the finished transfer. Photos by Len Villano.

“If you want exquisite detail,” Fortner said, “You have to sacrifice at least half the fish. You can use one fish multiple times – I once used the same fish for eight years. Bonnie and I also trade fish for inking.”

One of Bonnie’s biggest fans is her son Chris Warecki, also an avid fisherman.

“Her pieces are really unique. She’s always trying to make things look realistic as much as artistic. People love her art because it’s exactly how the fish look when they’re in the water. She spends a lot of time – she’s very meticulous, and puts a lot of thought into her paintings,” Chris told me over the phone while he was out on the water, rod in hand.

Bonnie also runs natural water plants through an etching press to give her pictures more detail. She inks them, and places them in the picture, adding depth and dimension.

“Twilight on the Reef” by Bonnie Warecki.

“I know a lot of sportsman who mount a fish and put it on the wall, but it normally ends up in the den or the basement,” Chris said. “With [Gyotaku], you can make a piece of art with it, and still see every unique feature of the fish and the stories that went with it. This is something the wife would be happy to have in the main rooms.”

For now, Bonnie Warecki is full of ideas for her work. She plans to experiment with contemporary color techniques and to incorporate new elements, like wood or linoleum cuts to give a fresh perspective of the fish in the water. And when she’s not inking fish, she’s out on the water, catching them.

Warecki exhibits her work at Lakeshore Adventures in Baileys Harbor. She also does custom fish rubbing in addition to her own projects. Contact her at 920.839.5457 for details on getting your trophy inked. Another resource for information on Gyotaku is The Nature Printing Society, an international organization for people who love fish and plant printing.