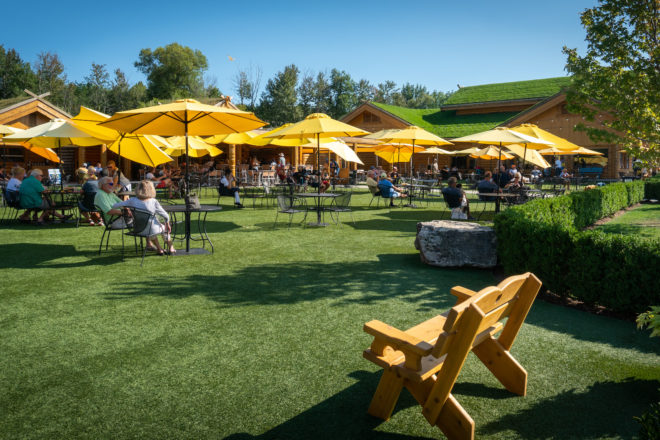 Fred Bexell was in an optimistic mood Tuesday afternoon. Early April is usually a tense time for the general manager of Al Johnson’s Swedish Restaurant in Sister Bay as he gears up for the summer onslaught, but for the first time in three years, he was looking forward to good news.

“From what I hear, the embassies overseas are opening this week,” Bexell said. He was referring to American embassies in eastern Europe, particularly in Romania, where Bexell finds many of the summer workers he needs to staff throughout the summer and fall at the restaurant. Most years, Al Johnson’s must bring in about 35 international workers to keep up with the summer crush, but during COVID-19, they were able to get only about a third of that.

“We normally operate with about 125 employees at the peak of the season,” Bexell said. “Last year we had 85. Our staff really stepped up and busted their butt, but even the winter has been busy. So everyone is hoping we can get some relief.”

Phil Berndt, who keeps tabs on the status of international J-1 student visa workers for Destination Door County, said he’s hearing good things about workers for a change as well.

“So far I haven’t heard any complaints from employers or sponsors,” he said. “The biggest concern is Ukraine and Russia, which have both provided us with students in the past. But prior to the pandemic, it was already problematic getting their visas approved, so many of the sponsor organizations have shifted their focus elsewhere.”

Travel restrictions during the height of the COVID-19 pandemic cramped the supply of international workers the last two years. Door County had crested at more than 520 workers in 2019, but last summer, just 155 came to the county.

So far in 2022, according to BridgeUSA, 421 workers have applied for visas to work in the county, with 118 already issued and another 303 pending.

As pandemic travel concerns ebbed, other roadblocks arose to hamper the exchange program: The organizations that sponsor the student workers have struggled to return to full staffing levels, and embassies have been slow to reopen. That makes it harder to process the thousands of workers who flow into the United States each year to fill needs for businesses that are desperate for workers.

Not an Easy Solution

Door County’s tourism and agricultural sectors have relied on international workers for almost as long as the peninsula has been a popular tourist destination, but until the 1990s, there was also a robust supply of high school and college students here to supplement the summer workforce.

But local schools have seen high school enrollment drop by roughly 500 students since then. The expansion of the busy season into the fall, as well as earlier starts for college and high school instruction, have also made those students who are left less able to fill the workforce needs.

So, during the mid-1990s, employers began turning to international workers to fill the gap, welcoming first dozens, then hundreds of students each summer.

During those early years, it was relatively easy to get workers, said Kaaren Northrop of Main Street Market, where she said she typically brings in 16-18 workers each summer. But she said the process has become much more difficult, competitive and time-consuming throughout the past 10 years.

“In the beginning, it frustrated me that a lot of employers wouldn’t pay the prevailing wage,” said Lars Johnson, co-owner of Al Johnson’s. “I remember telling people to be careful because nothing will kill the program faster than not treating these people as well or better than an American worker.”

The J-1 visa Summer Work Travel Program was developed not just to fill workforce needs, but also to serve as a cultural exchange. The visa allows college and university students to stay in the U.S. for four months, with at least two weeks reserved for travel within the country.

“The Summer Work Travel Program provides foreign students with an opportunity to live and work in the United States during their summer vacation from college or university to experience and to be exposed to the people and way of life in the United States,” says the program’s website.

Over time, the oversight of the program grew more strict to ensure that employers were abiding by the rules.

“People think it’s an easy solution for employers,” Northrop said, “but it’s a lot of work.”

The process for Northrop begins in November, working with an agency to identify and recruit potential workers. That begins months of emails and interviews. During the year before COVID-19, Bexell even traveled to Europe to interview and recruit workers in person. With demand high for workers, local employers must compete with large employers throughout the United States to convince students to come to tiny Door County – not New York, San Francisco or Los Angeles.

After months of communication and vetting by a work-travel agency, employers spend the spring with their fingers crossed, hoping their hires get their visas approved and don’t change their mind at the last minute.

“I always overshoot what I need because you’ll have kids get denied a visa, or they back out at the last minute,” Northrop said. “You don’t know that until April, and by then it’s too late to go back and get someone else.”

And all of that is done before your new employee gets on a plane. Both Al Johnson’s and Main Street Market have invested heavily in housing, as have many other area employers. First that meant buying homes, but eventually Main Street Market built a small housing complex of its own, and Bexell bought an old motel to convert it into worker housing.

“Once they’re here, they’re basically our kids,” Northrop said. “You have to pick them up at the airport, house them, make sure they have transportation. If they get hurt, you have to take care of them or take them to the hospital. You’re responsible for every single one of them.”

Bexell, who was born in Sweden and spent his first summer working at Al Johnson’s in 1992, said the experience of traveling back to Europe to recruit the workers was eye opening, even for him.

“It’s amazing what these kids do just to get a chance to come here,” he said. “Doing the trip over there the first time gave me a totally different perspective of what it takes for them. Many borrow money to come over here. They’re $3,000 in the hole before they even come over.”

And though those students can make that money back and much more once they’re here, Bexell and Northrop said the exchange benefits them and their U.S. staff as well.

“We’ve been averaging nine to 12 different nationalities at Al’s each year,” Bexell said. “Everyone is going to have a different perspective on the U.S. and a different background. We all learn from each other.”

Destination Door County (DDC) will host an employer forum via Zoom on Tuesday, April 12, 9-11 am. The event seeks to bring employers together to learn about program updates, find solutions to challenges and share best practices. The program is aimed at both employers who want to learn about the program and businesses that have employed J-1 students in the past. To find out more and register, email DDC’s Morgan Rusnak at [email protected] A recording will also be available for those who are unable to attend the live event.