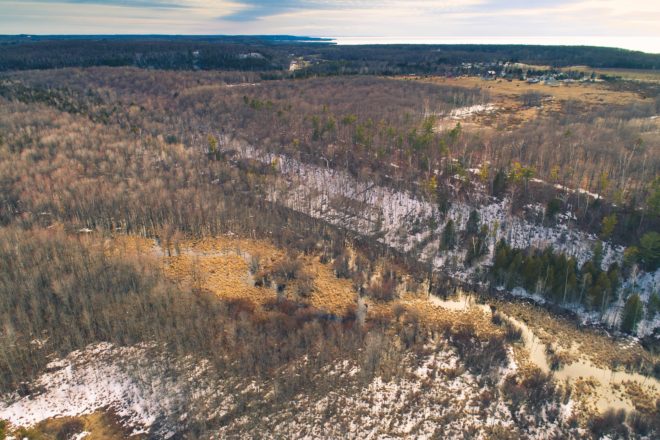 The Town of Gibraltar has taken out an option to buy 195 acres of land surrounding Fish Creek for $2.15 million. The heart of the property is pictured here. Photo by Brett Kosmider.

Electors will get their say during Oct. 16 vote

You wouldn’t know it walking through Fish Creek, but just a short stroll south from the public beach, past the community center and the long-term parking lot, there sits nearly 200 acres of undisturbed watershed, forest and blufflands owned by Marise Redmann.

The Gibraltar Town Board wants to buy it and turn it into the centerpiece of the community’s future. The board has touted the land’s potential as a recreational park and for affordable housing and commercial development. But after recent missteps building public bathrooms at the beach and clear-cutting woods to make way for a parking lot behind the community center, many residents are hesitant to give the town even greater responsibility for an undefined project.

The land Redmann owns includes roughly 100 acres adjacent to the Settlement Courtyard Inn on Highway 42, and almost 100 acres connected to that below the bluff behind the Fish Creek Park.

In April, the town secured an option to purchase the property for $2.15 million, or $20 for every $100,000 of home value per year on local tax bills. But that purchase must be approved by voters during a meeting of town electors. The estimated fair market value of the property, which has been on the market for about 10 years, is $1.89 million.

A presentation during an Oct. 8 planning meeting outlined potential uses for the property, focusing on affordable housing.

Ken Jaworski, a senior consultant with the engineering and planning firm Cedar Corporation, outlined the payback on developing 291 residential units at $181,500 per unit. That would add $52 million in valuation to the town’s tax rolls. Ten commercial units would bring an additional $9 million, resulting in $147,741 in annual tax revenue at full development.

Aside from questions about how realistic those visions are, the outline would bring substantial minimum costs. The estimate to extend public sewer lines across Fish Creek and up the bluff to any future development is at least $800,000. That does not include the cost of connecting that line to any homes.

Some of that cost could be passed on to developers – as well as the cost of roads and other utilities – but that’s up for negotiation.

After witnessing several poorly executed town projects during the last year, many taxpayers are leary of trusting the town board with executing a project of this scale.

“There are a lot of projects going on in this town that has my confidence very shaky,” said one attendee. Another said the town board should not be in the residential development business.

But others – even those who echoed concerns about the town’s project execution – said the purchase is worth the risk.

“It’s going to be developed,” said Donn Dresselhuys. “Do you want a voice in that or not?”

Jim Schuessler, executive director of the Door County Economic Development Corporation, described it as an extremely attractive property with great potential. He acknowledged the validity of residents’ concerns but noted the risks of leaving such a large number of building permits up for grabs at the doorstep to the town core.

“In economic development, site control is everything,” he said.

Housing is at the core of much of the debate about the property. Those in favor laud the effort to address a crisis that has long plagued the county.

Angela Sherman lives in the town with her husband and three children and serves on the Gibraltar School Board.

“People are fighting over homes to buy in this community,” she said. “I’m sick of seeing my friends leave because they can’t afford a home. They’re moving to Sturgeon Bay; they’re going to Milwaukee, Chicago.”

Another audience member lamented the fact that teachers and firefighters can’t live in the town, along with the young families that come with them.

“If you don’t have new families in this town, all of our investments are gone,” she said.

But other residents are scared off by affordable housing, usually acknowledging the need for it – somewhere else. Signs at multiple residences in town warn of “low-cost housing.” During previous meetings and stakeholder sessions, neighbors have claimed the proposals would destroy property values and bring crime to the area.

Schuessler, who has made affordable housing a top priority for his organization, has repeatedly pointed out that in Door County, the people who qualify for affordable housing include entry-level teachers, nurses, police officers, hotel clerks and business owners.

On Oct. 16, the town board will have one last opportunity to convince voters to trust it to handle the Redmann property better than it has handled other recent town projects.

Gibraltar Town Meeting of the Electors

Town of Gibraltar residents will vote on the purchase of the Redmann property. The meeting will include a presentation about the property and potential development by Ken Jaworski of Cedar Corporation, plus arguments against the purchase from opposing stakeholders. Voters must be 18 and eligible to vote, and they must have lived in the Town of Gibraltar for a minimum of 10 days.

In brief: Referred to generally as the Redmann property, the purchase would include developable land immediately north of the Settlement Courtyard Inn on Highway 42, plus a large portion of land below the bluff surrounding the Fish Creek watershed. The property holds permits for up to 580 residential and commercial units.