Isabelle St. John won her first award for writing as a nine-year-old, third grader. Like many successful writers, she wrote about what she knew.

“I take experiences from my life and weave them into fiction,” she said. “Sometimes I don’t know what’s true or false anymore!” she joked.

Every year since third grade she has entered the Mary Jo Nettesheim Memorial Literary and Illustrator Competition, both writing and illustrating her stories, and in grades six through eight each year she won first place at the state level. The contest, sponsored by the Delta Kappa Gamma Society International (a professional honor society of women educators), presents $100 prizes to the winners. 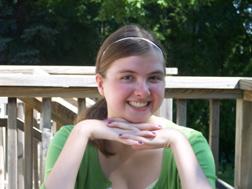 “An Original Is Worth More Than a Copy,” her most recent prize-winning story, was inspired by the Jacksonport Women’s Club’s fundraising activity of baking and selling kolaches at the Maifest and Cherryfest celebrations. Isabelle’s parents Joy and Lee St. John, who own a summer home in the village, participate in the baking and sales project.

In Isabelle’s narrative, a 14-year-old New York City girl Katarina, who wants to be popular, gives her baker-parents’ secret recipe for kolaches to the magical creature Dimplebuska in exchange for social success. The tiny man uses his powers to grant her wish, but subsequently gives the recipe to other bakers, causing the girl’s parents to lose business. Grandma offers her a remedy for withdrawing the ill-fated wish and Katarina realizes the truth of her grandmother’s advice, “Be yourself. An original is worth more than a copy.”

Isabelle had remembered a classroom poster with the adage that became the moral of the story that she dedicated to the Jacksonport Women’s Club.

While the young author has enjoyed a great deal of success, she is quick to give credit to others for their help. “I’m involved in the gifted and talented program at school,” Isabelle said, “and the two teachers [directing it] have been very inspiring and helped me as a writer.”

Isabelle’s parents, Joy who is a school librarian and Lee who is a chief financial officer for a landscaping company, along with her other teachers, have also been inspiring and understanding. And “even my friends are very supportive of me,” she said, “and want to read my stories.”

This fall 14-year-old Isabelle will be a freshman at Kimberly High School.

“I feel kind of excited,” she said, “meeting new people, some of them older. I feel nervous about a bigger school, but there are lots of new opportunities and things to try.”

She is involved in band, chorus and musical theater, and regards her friends with similar interests as “sort of one big family!”

When Isabelle looks to the future, she sees herself as a surgical nurse, and is thinking of attending UW-Oshkosh after she graduates from high school.

“I would like to help people,” she said, “but I will always keep writing and trying to get things published. My goal is to be on the New York Times bestseller list!”

The author that Isabelle most admires is JK Rowling; she had read all of the Harry Potter novels. “My dream is to write like her!”

And perhaps she will. Izzy was named after Isabel Black who was a public children’s librarian in Kaukauna. Joy and Lee as fourth graders had attended story hours that she offered and both looked up to her. When Isabelle was younger, she met her namesake, who was then in her 90s.

“I still remember her,” she said, “her hair in a bun, and she liked poinsettias!”

Isabelle St. John sounds like an author’s name, and it has already appeared as a byline for an article that she wrote for doorcountytravelersjournal.com, and for her poems that have been published. Two of her stories (“Peter Rabbit and the Hot Petunias” and “The Bookshop Stowaway”) are included on launchpad.com.

It should be a name easy to remember during future years when readers glance through the book section of the New York Times.