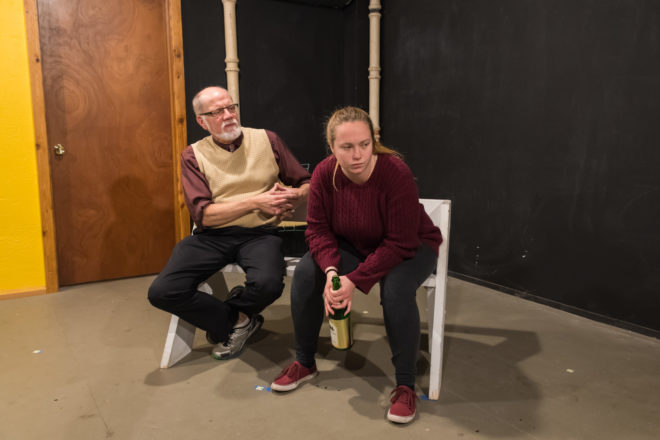 Isadoora Theatre is back, though it may look different than you remember. This weekend, the theater puts on its last show of the season, Proof, and it may not be reminiscent of the kinds of performances the company did in the past.

In 2013, after performing three shows per season for 10 years, Ed DiMaio, president of Isadoora, was ready for a respite.

“It had come time to stop,” DiMaio said.

After a false start with a new board, the theater eventually got a group of people together that all had a similar vision. With this new iteration, the shows would be smaller, self-sustaining and follow a less rigorous schedule, which also meant they required less money and fewer resources.

After taking stock of the theater’s first season back and meeting to plan for the next one, DiMaio said simply, “I guess we have a season for next year.”

Proof is a 2000 play by David Auburn and follows the story of the daughter of a recently deceased mathematician who, even after death, remains highly respected in the mathematical world. A groundbreaking proof concerning prime numbers is discovered in his office after his death and his daughter, Catherine, claims she is responsible for the work.

One of her father’s students, Hal, doubts Catherine is capable of producing such groundbreaking math (she only has a year of college under her belt) and Catherine is unable to prove with any certainty that she wrote the proof.

Isadoora Theatre’s production of Proof is directed by Richard Carlson and stars Dan Sallinen, Carrie Counihan, Keri Grimsley and Marcel Bruyere. The play deals with the effect mental illness has on one’s family and work. In the play, Catherine must come to grips with the fact that she not only inherited her father’s genius, but his mental illness as well. DiMaio works for JAK’s Place, a local community resource serving those affected by mental illness. Few plays deal seriously with mental illness, so DiMaio and those at Isadoora were excited to present a thought-provoking, engaging piece on the topic. 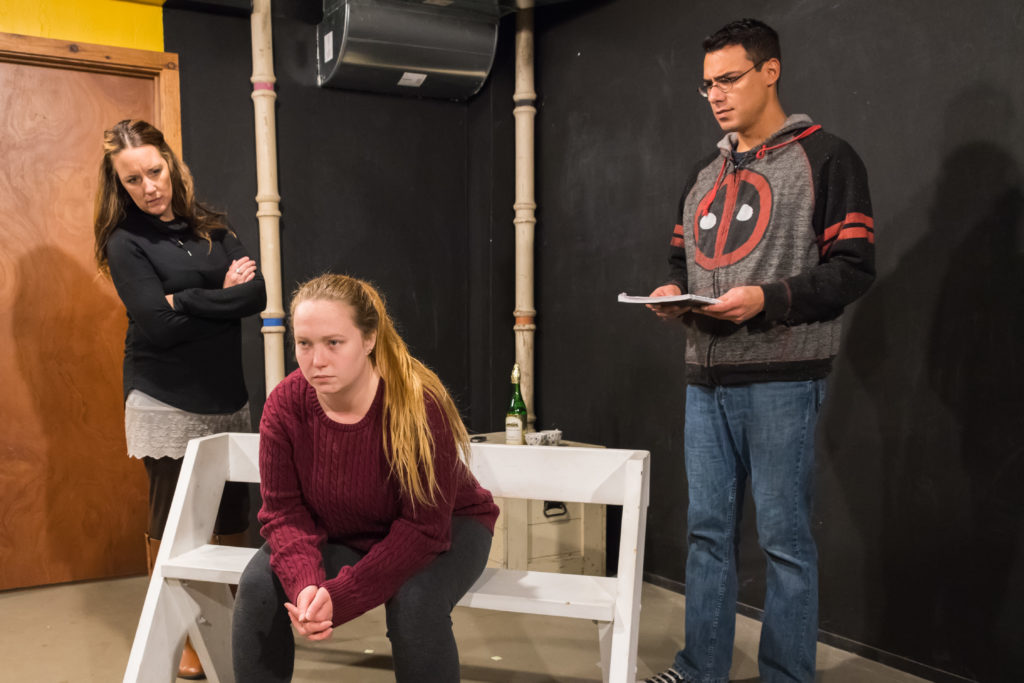 Carrie Counihan, Keri Grimsley and Marcel Bruyere act out a scene in the Pultizer Prize-winning Proof. Photo by Len Villano.

The show is also a meditation on the role gender plays in our judgments about people’s abilities. We often associate certain fields of work with specific genders, and math continues to be a male-dominated field. In the play, Catherine’s abilities are doubted not only because of her education, but also because she is a woman (nevermind that she is the child of a genius mathematician and spent countless hours with her father in his final years).

It is a form of discrimination DiMaio said was important to explore. The fact that some girls are being turned off from exploring math or science is reason enough to stage a play that challenges these notions. DiMaio said he hopes Proof offers an alternate narrative for women, one that does not put a limit on how and where females can achieve.

Though this is Isadoora’s last show of the season, they will be back in June 2018 with performances of a series of monologues by Craig Little. Then they will perform Annie Baker’s Pulitzer Prize-winning play, The Flick, in August, and finally Ed Gein The Musical in October. Isadoora also meets every other Saturday for a playwriting collective, where work in progress is read and discussed among a group of playwrights and artists.

It may not have the glitz and glamour of the Isadoora Theatre of the past, but DiMaio likes it that way. The focus has shifted to be about producing strong, challenging material that doesn’t require an inordinate amount of money. And if you need proof that this is a winning strategy? Well, just see Proof.

Proof will be performed Nov. 17–19. Friday and Saturday night performances are at 7:30pm, Sunday’s performance is at 2pm. Performances are held at the Inside/Out Theatre space at the Margaret Lockwood Gallery, 7 S. 2nd Ave. in Sturgeon Bay. Tickets are $15/adults, $10 students and seniors. For more information or to reserve tickets, call 920.495.5940.