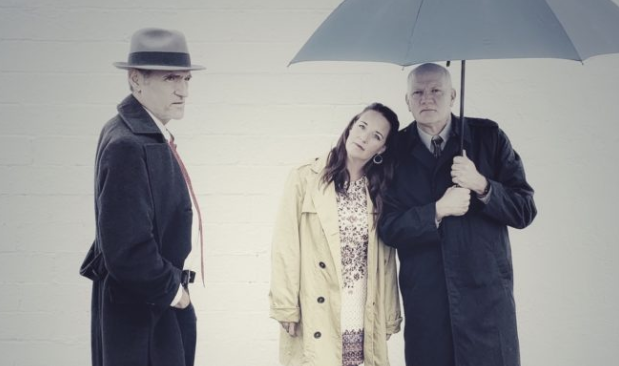 The first act of this Pulitzer Prize-nominated play by Richard Greenberg takes place in an unoccupied, dust-covered loft space in Manhattan in 1995, when Walker and his sister, Nan, meet to settle their parents’ estate with their childhood friend Pip. This reunion is emotionally charged for each for different reasons, and it’s complicated for all three – far more complicated, in fact, than they ever come to know – because their fathers had been friends and partners in architecture whose professional legacy included the Janeway House: a renowned, avant-garde, brilliantly daring 1960s creation.

In the loft space – whose existence is itself one of the play’s many layered surprises – Walker finds a sparse journal that had been kept by his and Nan’s father, Ned, from which Walker fashions a story to explain some of their present circumstances and family history and to make sense of their parents’ seemingly loveless marriage.

As the trio’s reunion plays out in unexpected ways – at times tense and intense, at times tender and sweet – Walker, Nan and Pip find that there’s much more at play and much more at stake than who will take possession of the Janeway House in the end.

The second act takes place in the same Manhattan loft in 1960, when it’s inhabited and full of life. The same three actors play their parents during the titular “three days of rain” – which are crucially important to the life trajectories of the characters from both generations but are mentioned only in that cryptic, spartan way in young architect Ned’s journal – and those days reveal a romantic entanglement, a creative dilemma and twists of fate that the adult children had never imagined.

Richard Carlson directs Three Days of Rain’s cast of three. Dan Sallinen plays the restless, tormented provocateur Walker, as well as Walker and Nan’s father, Ned: a shy, intelligent man with a stutter who is not the person Walker and Nan always believed him to be. Carrie Counihan plays Nan, an anxious peace-maker; and Nan and Walker’s mother, Lina: a Southern belle who’s starting to show signs of mental illness. Edward DiMaio plays both the easy-going, sensitive Pip and Pip’s father, Theo, who is lauded as an architectural genius but may not deserve the title and may be more concerned with fame than substance.

There’s a wonderful immediacy, urgency and intensity that come from seeing this show performed in the very small, very intimate Inside-Out Theatre – a black-box space with no stage in which the actors are only a few feet from the audience. Their words and actions in such a space take on a gripping, personal feel as they powerfully engage the audience.

The actors give excellent, nuanced, all-out performances and create believable, memorable – and at times very funny – characters as they expose some of the secrets they’ve kept, learn some that have been kept from them, and explore the layered, complicated, caring, painful relationships that have had indelible effects on their intertwined lives. Some things they will never know – and more’s the pity because life and lives are not always what they seem.

This show is well worth seeing, so arrive early or purchase tickets in advance to secure your seat. There are only three performances left.