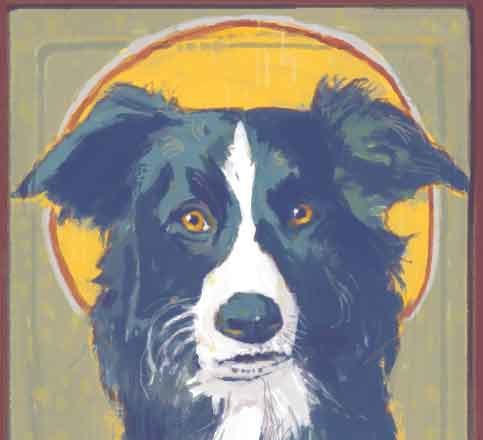 A simple ritual it is, our evening walk down to the creek before supper with the dogs and the chance of a ball or stick. To suspect this has been a well-worn human routine ever since Cro-Magnon and Neanderthal, our collective habit with dogs that old. Something distinguished happened to our species when we married our fates to dogs.

The dog connection has been my personal pattern since a farmboy wandered down the cow lane, age about four years, herding the cows to their morning pasture. This, my first official farm chore, in the company of a dog. Technically the dog was baby-sitting.

Most of us have had the experience when at an impressionable age some smart-alecky kid in Sunday School points out that god spelled backwards is dog. This, a supposed insult to god. As a farmkid sort of child I didn’t feel that way, instead it made perfect sense. After all was the dog who gave me courage enough as a four year old to chase really big cows to a far away place. About a mile it was, the woods just short of Borneo and halfway around the world, a strange and foreboding place. If less foreboding because I had my companion, a four-legged kind of courage and self-defense as was bonded to the human heart fifty or a hundred millennia previous, under the same sense of vulnerability to a strange and decidedly hostile world.

When the great forward-propelling inventions of mankind are listed: fire, the spear, the bow and arrow, the garden, bread, beer, taxes, the wheel, catsup, hot dogs, electricity, the brassier, gunpowder, birth control, window glass, pizza; all these things, tea, wine, scissors, those hundreds and thousands of things, toothbrush, indoor, roller bearings, ball point pens … one of the more sterling achievements of our human saga is routinely neglected, our relationship to “canis familiaris,” our companion in courage and adventure ever since.

I have wondered as a farmkid, might dogs do the world more average good than psychologists and priced-by-the-half-hour shrinks. Perhaps the same can be said of the ministry. What dog, lacking any invitation to soul or eternal life, is the less happy, eager and companionable for this oversight? To a farmkid this suggests something. It was as that farm child walking the cow lane where began my unbelief, how could a religion so fraught for soul, heaven and eternity not include a gospel for my dog.

It only took a farmkid to realize that my companion dog would square itself in front of anything threatening to a miniscule farmkid, a naturally occurring paladin; if my personal defender at the price of table scraps would do this without the need of heaven, where was my similar measure of courage?

I feel this more acutely because the farm dog has a special station in the hall of heroes. Our every field activity was accompanied by that dog; the dog as walked us to school then ambled home. The dog that rode the hay wagon, the dog with its precise spot in the middle of the seat in the pickup truck. The dog as went tent camping, ate what we tried to cook and when we went to college looked out the bedroom window with a forlorn heart. When we came home on semester break bounded to the bed and lay close.

My wife chose me less for me than my farm dog, a border collie that soon after took up her safekeeping. Preferring to sleep on her bed rather than its master’s, to admit I too preferred that option.

My farm yet has that cow lane in the same place it was when the barn was full of cows. The lane has a crook in it from going around a tree that isn’t there anymore. My son recently voiced the opinion that we should realign the lane to match the field.

I have resisted this saying I just like it the way it is. Not knowing why myself until I realized all those dogs, those heroic, ever-eager, ever-loyal farm dogs are buried in regimental order along that lane. Among the lilacs, the dogwood, the wild grape, the ox-eye daisy, the asparagus lie the dog gods of the farm. A lab who could unload hay bales from a wagon, a terrier who could dig a fence hole faster than a tractor-mounted posthole digger if not quite so straight. A border that could jump from the ground to the top of a hay load, who gave birth to her puppies in my bed, for some reason it didn’t bother me.

This the same lane where my dad buried his dogs and my grandfather his, and not a headstone in sight. When it comes to that kind of courage, that essential dog courage of life, no headstone is required. Seems the smart-aleck critics of Sunday School were right – god spelled backwards is dog.