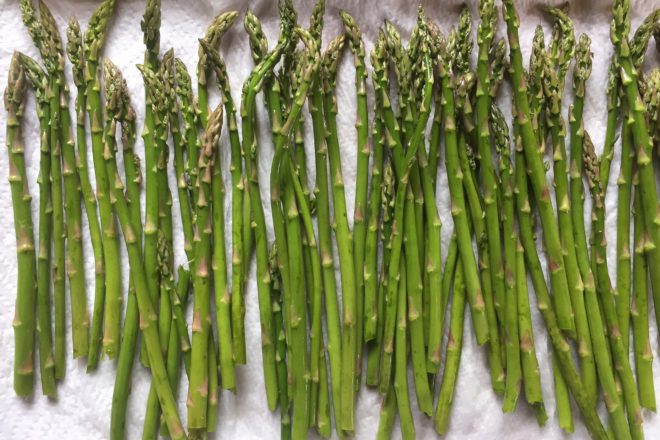 Asparagus stories are of emergent things, to perhaps add newness to this list, and hope, and joy, and daring.

Once was when that tribe of farmers used to utter private catechisms on asparagus. Asparagus as the spring tonic if not an omen. Crops and margins and chances of drought predicted by asparagus. Farmers did this because asparagus was royal, to say cock-proud, referring to the rooster or peacock on the roof of the chicken coop some spring morning. Perhaps it wasn’t the rooster.

I admit I am a hunter of the old sense. A hunter before black powder, before bow and arrow, before Colt and Winchester, before Remington and Stevens, with nothing to do with the NRA. A hunter of the old way, a hunter of grass, of mushrooms, watercress, milkweed taken young, of coltsfoot, artichoke and yet to follow the legend of willow bark pickles.

My mama believed asparagus was too good a thing to waste on children, a surprisingly selfish turn for a mother-kind when it came to asparagus. She and our father would enter what seemed a romantic hush when the first of the season asparagus soup came to the table. They looked to each other’s eyes like they were sharing some illegal tonic, to suspect an aphrodisiac. They held close those treasured bowls of asparagus in epicurean séance that was part worship. A private thing asparagus was between them, consistent with the view that farmkids were basic carnivores, as likely wolverines, as likely not to appreciate the gentle saveur of first grass. That French word saveur, to suggest connoisseur…if also a little beside oneself. Ordinarily a connoisseur is of things from the high shelf of any attending economy, seldom is the connoisseur of puffballs, watercress, of milkweed stems or purslane comes to mind. Also of peas fresh of the field, same for green beans, of sweet corn eaten raw and dripping like a scalp-lock, that fresh. There are field crops that can and ought be eaten raw. You cannot believe this until you’ve tried it and when you do, the image of the Aztec virgin will flash before your eyes. It is impolite to wonder why this is.

My parents took their asparagus in small, dainty fragile bowls. Bowls our mom reserved for first asparagus the same as certain wine flutes are reserved for champagne. This first issue of asparagus generally concurred with the spring planting of potatoes, often on the same evening the field was wedded to the planter. There was dust on our father’s shoulders as he came to the table, he smelling of earth, hope for another year planted in the ground; that night of the first asparagus. Those few daring and precious spears. Too good to waste on the wolverines.

My parents took their asparagus the old way, the old revolting way with clotted cream. Not a regular cow’s milk soup but that of cream skimmed off the top of the milk can. Milk allowed to sit until the cream floated, skimmed neatly off and allowed to congeal in the refrigerator, better on the kitchen counter. By supper it was a lumpy morass with a slight acidic taste. Heated, the cooked asparagus turned in, salt and pepper to taste, butter, real butter, the result what my parents ate for supper. Rolling their eyes like they were partaking of the finest, most exquisite fare of the planet. The taste for this recipe died with my parents, of new asparagus and clotted cream.

Eventually, as happens to farmkids, I also joined the hunt for the semi-divine asparagus. I like mine in a shallow dish of buttered milk, the asparagus boiled gently, the milk boiled too but not harshly, just enough to bunch together in prehensile strings. Some add citric acid and rennet to the milk at this stage and combine with asparagus. Part asparagus soup, part mozzarella, if not so crude as clotted cream.