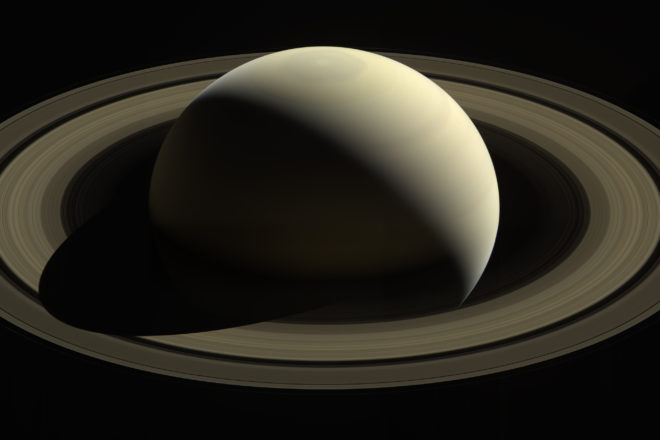 With this view, Cassini captured one of its last looks at Saturn and its main rings from a distance. Photo courtesy of NASA/nasa.gov.

On Sept. 15, 2017 a fellow Earthling will die, actually it’s an execution. To quickly add, for a good cause; this fellow Earthling’s name is Cassini. If some of us believe machines don’t die, they just stop working, some others of us think machines too can have a soul.

Perhaps it is only farmboys that believe machines die. To relate here that most farms have private cemeteries, dogs mostly, aligned to some farm lane, marked as to be inconspicuous lest the neighbors talk. A rock marker suffices, as does a nice cedar fence post, this for dogs, favored cats, horses, and to suggest there are hallowed cows, pigs and sheep. As that farmkid I thought it abundantly fair to be buried there among them, only marked by the innocence of a rock and that soon moss covered.

To take this a step further and confess that farmers also favor memorials for machinery unless the trade-in value is too high. This for heroic machines, tractors with a myth-bundle attached, not to forget zealot combines and epic planters, all worthy of legend. In rural parts exists this alternate religion that endows inanimate objects besides our mothers-in-law with soul, stuff that other people believe is just a machine.

Cassini is a fellow Earthling, born 30 years ago as a space venture between 17 countries. Launched in October 1997, followed by an intricate and decidedly economical flight path to Saturn. A peregrination that included two passes of Venus, one of Earth, a swing around Jupiter, maneuvers known as gravity assist, to achieve the velocity to escape the sun’s gravity and reach the far realm of Saturn seven years later. Cassini has for 13 years been orbiting Saturn, its moons, its rings, the mysterious magnificence of this planet.

Saturn, whose ring divisions and four of its moons were discovered by one Giovanni Cassini circa 1675, is arguably the solar system’s most complex and intriguing planet. While Jupiter, Neptune and Uranus also have faint rings, Saturn’s rings are flagrant. Saturn radially is nine times larger than the Earth, but only one eighth the density, its volume is approximately 800 Earths, its mass 100 Earths. Its name comes from the Roman god of agriculture, its astronomical symbol is a sickle. On a good viewing night the planet appears light tan in color, some say pale yellow. With an 8” to 10” reflector you can see the Cassini Division in the rings. Saturn’s solar year is 29.4571 years. Its surface temperature varies from -139°C to -189°C. Its atmosphere is currently thought 37 miles thick, 96 percent hydrogen. Its rocky core believed to be surrounded by a layer of metallic hydrogen, in due order liquid hydrogen. A fierce magnetic field is generated by the metallic hydrogen layer. Wind speeds of Saturn’s visible cloud layers, mostly ammonia, reach 1,800 km/hour. Titan, Saturn’s largest moon, is bigger than Mercury and comes with an atmosphere, the only such moon in the solar system. Rhea, Saturn’s second largest moon, has its own ring system and a hint of atmosphere. Saturn being the well-equipped agricultural planet has a potato moon, Epimetheus, dubbed the potato moon for its pock-marked elongated surface, mindful of a nice Russet Burbank. Epimetheus shares its orbit with Janus such that every four years (Earth years) the moon positions intersect and they switch orbital planes, a basic square-dance routine.

As the Cassini mission winds down to its final day on Sept. 15, the goal of its last mission has been a unique orbit, neatly slipping the spacecraft between the rings and the atmosphere of the parent planet. A secretive ring was recently exposed at NASA and its sister space agencies. The bet, the rumor is at $5 per chance, refers to a prime question surrounding Saturn’s rings. Are they old rings that formed when Saturn formed, now billions of years old? Or are they new rings formed perhaps as recently as 100 million years ago, the fractured fate of a misspent moon?

Problem being, how do you tell an old planetary ring from a new planetary ring? The answer as any northern winter kid will know is because new ice is shiny, old ice is dirty.

The smart bet seems to be on the rings of Saturn being new. The close-up photos of the rings appear pristine, and we all know how shop-worn planetary rings can get. Saturn’s rings glitter like fresh snow. Not like old snow, not like 4.5 billion year-old snow as can “soot up,” as even a kid knows.

The best guess is the rings are the remains of an ill-fated moon, 90 percent water, 10 percent iron oxide hence the taupe coloration to the rings.

At the end of its 22nd orbit, the Cassini craft will execute, sorry about that word choice, one last orbital adjustment and yaw into the cloud cover of Saturn. This on Sept. 15, 2 months and 10 days, 23 hours, 43 minutes, 51 seconds, 48 seconds from the moment I am writing this.

The Cassini mission continues a plotline we as human beings don’t really want to hear, despite our expectations, raised as we were on Jules Verne and Isaac Asimov, on Star Trek and Star Wars. The rotten fact is space travel for human beings is too expensive and too complicated in our present corporal form. The future of space travel more readily lies with humanized robotics, our human personality wedded to space crafts as don’t need to eat, breathe, drink, much less go to the bathroom and can tolerate radiation sufficient to fry bacon. We are at the historic cusp of machine intelligence, why not a mechanical, baptized, soul-bearing humanity? Why treat space flight like some carnival ride for fragile animals when the same money can mount dozens of space missions not burdened with keeping zoology alive.

Which is not to say we might one day create space-factories with human colonies to mine Saturn of its hydrogen fuel. To suspect when our technology can accomplish this we won’t need hydrogen as a fuel if maybe the deuterium. Humanized robotic missions can fill that gap where the science fiction we have told ourselves, the science fiction we have dreamed for generations, can’t match what we can do with our surrogate brethren, the machines of us.

Cassini will be dead or soon to die when you read this, to think this moment deserves the same status as all heroic explorers, never mind it’s a machine. Perhaps Cassini deserves a spot at Arlington.