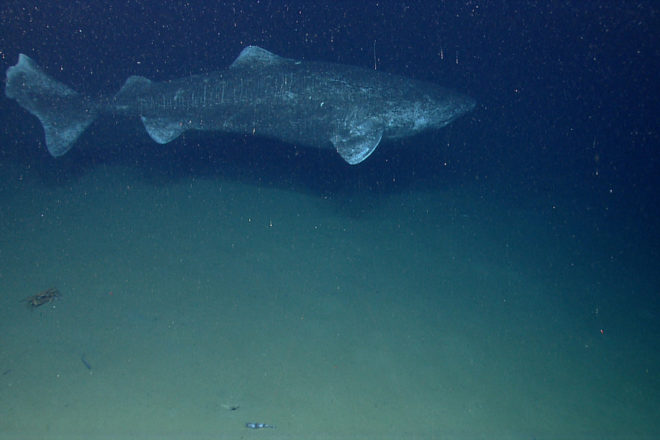 Somniosus microcephalus, also known as the Greenland shark is the world’s latest celebrity. Known to fishermen as the Greenland, this shark is widely distributed through the North Atlantic, found at the surface as well as in the depths, amazingly at 1,800 meters. Adults grow to 400-500 centimeters, making it the largest fish in these cold waters. Their annual growth rate is estimated at plus or minus one centimeter, hence a 400-500 cm adult is an old fish.

The Greenland is not a pretty fish, its blotchy paint job resembles a length of used sewer pipe, but it does have large blue eyes mindful of Frank Sinatra. Not much was known about the Greenland shark and it is generally ignored as just another large predator roaming the sea lanes if routinely found in by-catch. It was not until someone wondered how old this uninteresting shark was that things got interesting.

Sharks have no calcified tissues, to the consequence there is no way of telling how old is a shark. However they do have those blue eyes and eye nucleus contains inert crystalline proteins whose original cells are formed prenatally. These tissues retain traceable proteins corresponding to their birth age, and remain unchanged throughout life. To date the animal’s age is to correlate their origin proteins and their isotopic identity to the background isotopes. Dating the shark’s birth Carbon 14 level against modern Carbon 14 levels yields an individual time signature of every Greenland shark’s mom at the time of pregnancy, yielding the isotopic footprint of what she was eating.

Every thing living and dead carries this unique isotopic calendar, based on the air we breathe during our lifetimes, the foods we eat, such that bones, teeth and the eye lens nucleus can be isotopically dated.

The proof to this mechanism gained a novel additional marker to this signature on July 16, 1945 at a place called Trinity, the world’s first atomic bomb, followed by 519 others, all of whom codified the isotopic fingerprint of everything living, including the Greenland shark.

This “bomb pulse” as it is called has become a time marker, that when combined with the known growth pattern of the Greenland shark, details that sharks more than 500 cm long have a lower age limit of 272 years. Sharks less than 300 cm long are younger than 100 years. A recently analyzed Greenland of 493 cm is believed to be 392 years old, plus or minus 120 years, born some time of 1600 A.D. Bowhead whales have been found with an estimated age of 200-plus years, and the non-vertebrate arctic quahog age estimates push 500 years. Of only curious interest, the age of sexual maturity for the female Greenland shark is some 156 years, give or take, a point of departure most parents would agree with.

The life span of our own human species has increased significantly throughout history. Jesus at 32 years in his own time frame was considered an old man, the average expectancy in this period was 30-35 years, to add that high infant mortality doesn’t help the average. The base factors of old age are varied as they are multiple: nutrition, natal care, water quality, disease, physical injury, mental health, stress, climate, physical activity, good genes, bad genes. The life span for the humans remained relatively constant through most of prehistory, fire and farming improved on that, standardized our nutrition, to suspect beer when it came along made things better even if they weren’t, cooking radically modified the disease vector. At the time of the Norman Conquest the average life span was still stuck in the 30-40 year range against those constants of nutrition, water quality and disease. What changed this equation was improved agriculture and cultivation, horse power came to the fields, the adaption of the “Chinese plow,” new seeds and cultivars, tea, coffee (the water was hence boiled), the availability of fabrics, even shoes aided our health, home hygiene, outhouses followed by septic tanks, in the end the sewer pipe probably saved more lives than the smallpox vaccine. With these advances we steadily eliminated or marginalized some magnificent disease vectors: smallpox, tuberculosis, whooping cough, malaria, yellow fever, measles, mumps.

It is predicted some person now alive will live to be 150 years old, that one out of 10,000 will live to be 115 years old. The betting odds are she will be Italian, eating the Mediterranean diet, like as not a Catholic nun. Draw your own conclusions.

The emerging problem with long age is not how but why, the issue isn’t long life but long health and short morbidity. We are not 400-year-old Greenland sharks meandering the unchanging depths of the ocean, our environment changes, our world alters, times change, tunes change, moods change, fashion changes, foods change, friends and family die. The old often feel stranded by their survival, marooned on that desert island of long life. A loneliness that is mentally frustrating and taxing, such that many have private fears of being left behind.

When the Social Security Act passed in 1935 the average life span was 59.9/63.3 years, by formula many never reached pension age, as greatly improves system dynamics. Retirement age has not kept up with the original intent, if allowing “old people” to remain in the work force has its own consequences. Currently an estimated nine million over 65 remain in the work force, both full and part-time. This figure has doubled since 2000, against the backdrop of decreasing overall employment. Older workers are working at higher rates than a mere decade ago, no other work group compares to this increase.

The Greenland shark demonstrates long life is doable, if the more impolite question is to wonder what is the real worth of living long. On this science is divided, some believe we can push the 115-120 year envelope. Others suggest 115 is a cellular limit, that aging and death is a matter of replication defects. Optimists hold the 1,000-year life span is possible, if maybe we should ask why? Would we really remember that afternoon with William the Conqueror?