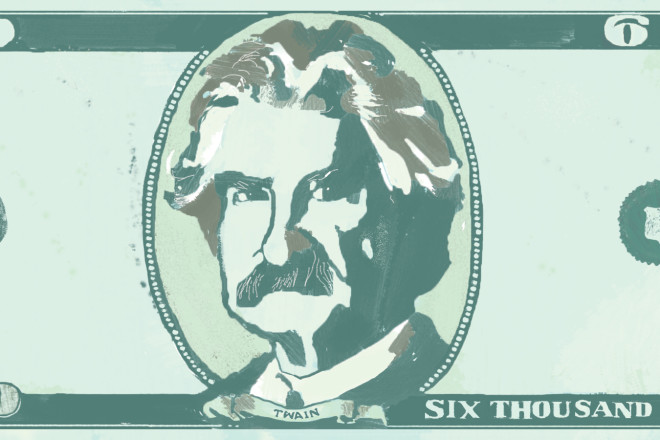 The fans of Mister Mark Twain hold Mark Twain ought have stood for the presidency, if for no other reason than to establish an historical precedent. An alternative to the tired tradition of advancing ex-generals, ex-senators, career politicos, along with miscellaneous capitalists and movie stars to that office, that a decent nation ought occasionally favor an English major. To admit Mister Twain was not a Mister in its original guise, that is, holding title to a baccalaureate degree, Mister being the popular expression for this accomplishment from the latter Middle Ages to the Elizabethan. Mister Twain did not go to college nor was he an English major, if he did end up being the major interest of English majors who yet call themselves Mister, now including coeds.

The theory is that politics would be better off with the occasional dose of a fiction writer, better yet combined with a humorist, the exemplar being Mister Twain. A modern prospect might be Jerry Seinfeld, Wisconsin’s illustrious Michael Feldman, to think Paula Poundstone would add a dose of levity, David Sedaris methinks a bit too moody, as for Bill Cosby, his polls are down, if for a while he was candidate for Pope. For a Norwegian flavor add Garrison Keillor to the list.

On the face of it, politics and fiction are natural bedfellows; were this not true we could employ any mediocre statistician as a placeholder for the presidency. Needing only to offer a weekly bar graph as to the state of the union, that citizens could either take or leave or try to interpret. Rather like a weather forecast, with the 20 percent chance of recession by mid-November, inflationary risk of 10 percent, with 12.9 percent odds of a multi-billion dollar climate incident involving FEMA, add 5 percent more immigrants to the mix, terrorism remains a steady 0.00000004 percent chance. The nice detail about the statistical presidency is blame cannot be attached to statistics so any bad-mouth political agenda would eventually die out. Statistically not a bad thing.

My cause for digging up Mister Twain is his novel The Adventures of Huckleberry Finn. Page one, where Huck Finn the narrator introduces himself, along with his companion Tom Sawyer. We reacquaint with the story, how Tom and Huck saved Becky Thatcher from the cave and Indian Joe. Becky who went on to a career as a fashion model in the initial Montgomery Wards’ general catalog, and single-handedly made that catalog famous with her contribution to the foundations section of the catalog…that very same Becky Thatcher. Later she dressed as a male and participated in the first modern Olympic Games when the steeplechase was still an organized sport, as didn’t do the golf course any good. On second thought to give the hazard trap some genuine emotion.

Was in the cave Huck and Tom found $6,000 in gold that with good advice was deposited in a capital account with a New York bank at interest gaining a dollar per day. Our famous duo were suddenly rich young men, whereupon Huck retired to his literary narration of the river including its drift toward soft southern nights, at which point the narration ceased. The predecessor of every innocents-abroad script, on-the-road novel or canoe novel, begins with Huck, including the chance at a Pulitzer. Technically the raft was stolen property, this is regularly speaking how English majors get their start, with stolen property.

I was reading out loud to my wife the opening lines of Huckleberry Finn, before supper on a warm summer night. Our table in the front yard, a casual habit on summer evenings. Zucchini on the grill, cold potato salad, chicken with a vibrant touch of jalapeno as would have surprised Huckleberry, of such a taste occurring so far upstream. This when my wife made comment: “What kind of interest rate yields a dollar a day on 6,000 dollars?” The return Huckleberry cited. A quick calculation has 6.1 percent simple yielding $366 annually. Narrator Huck does not state categorically whether both he and Tom earned a dollar a day or whether they shared that dollar. At this juncture a lumberjack in the north woods might hope to earn a dollar a day and support his family, to guess the interest rate Twain referenced was 6.1 percent.

My wife looked at me longingly and said, “interesting,” she didn’t mean to be ironic, “6.1 percent in our time would be very interesting.”

The current state of our economy is unnerving as it is unnatural, with bank rates at .05 percent interest give or take. At 1 percent we are approaching the interest rate of the Middle Ages when Roman edict forbid usury whereas Judaism did not. As explains the nasty treatment of the money changers in Scripture. I do wish the same people who cite scriptural teaching about gays would address the Scriptures’ take on playing football in the Sabbath, eating venison, or putting your money out at interest. To be stoned to death along with gays, eaters of venison sausage, kielbasa and those bank deposits.

There are economists who claim easy interest inspires high-level investment, as also includes risky investment. A friend recently asked what I would do to curb the steady expansion of irrigation in Central Wisconsin, what kind of legislation? I replied, forget legislation, just raise the interest rate. When you can borrow money on next to nothing you can irrigate three-dollar corn. Bad things happen when money is too expensive, the same is true when money is too cheap.

How do people save for retirement in an interest-less economy? Invest in gold, land, dairy cows, corn futures, fancy homes, art, antiques, dot-coms. Interest-less economies tend to make money too disposable, you might as well buy stuff because the money isn’t interesting.

Once upon a time in a place far away banks advertised they compounded interest daily; they don’t do that anymore.