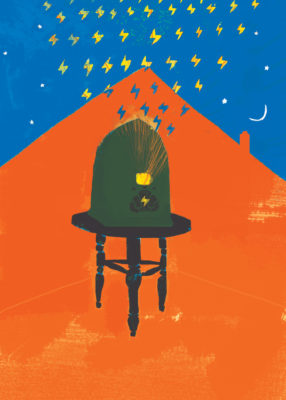 Maybe it’s just lonely farmers that listen to late night radio. To suggest a political affiliation here, an affinity for the dark, the moods of the night, those solitary thoughts, we who gather around the muffled glow of radios in the nether hours.

My childhood was uniquely radio, to reference baseball. As a sport, baseball was intrinsically designed for a specific leisure, in person to include hot dogs, beer, popcorn. Basic fact is baseball is boring to watch, at least most of the time. Baseball is like cotton candy, 99.67 percent hollow, with long meditative bouts of 3 balls, 1 strike. The excruciating extended stare of the pitcher attempting to vaporize the batter, who shakes off the sign like a range cow on locoweed. His eyes rotating like an oceanic flounder to track the runner on first base. Base runners know to instinctively inch away from the pitcher’s vision zone, causing torque to his skull enough to effect his 3 and 2 pitch. The ball pulled right by the sheer geological stress. Baseball is a deeply meditative sport. Vacate the ball and this whole business qualifies as just another yoga position.

Baseball as a game moves slow enough to be transported by radio on a warm humid summer night. To be recreated whole in 3-D in the prairie region of your brain. Not so football, antic as a super-collider, soccer has a similar orthodoxy, tennis is your basic fly-swatting, golf is play by play of a funeral parlor.

My childhood was spent at that glowing altar of AM radio. AM radio was meteorological radio. To listen to the AM band was to listen to the dynamic forces available to your local township’s atmosphere. Night games interrupted by cumulonimbus somewhere between Milwaukee and Central Wisconsin. To listen to AM radio was to pop the cover off the planet Earth and hear the rattle and roll of the cosmos intersecting between Chicago, St. Louis or Kansas City, dependent on the dexterous touch of your fingers micro-metering the tuning knob.

Mine was a hand-me-down Philco radio weighing 25 pounds, its true lumber walnut case came with a tuning dial that glowed like a cheery fireplace, enough to light up my room. If it wasn’t baseball, it was alien fiddle music rising out of some Cajun bayou caught up by an atmospheric oscillation to surf across the Illinois prairie and catch in the trees and pasture fence of Central Wisconsin. I believe I got better reception in my bedroom than in the kitchen below due to the thin air of that second story bedroom, if yet unknown to science why attic rafters of old growth pine better intercept the AM band. In that rarified air of middle childhood, those waves collected, filtered through vacuum tubes to tumble out of a cloth cone speaker powered by an intense permanent magnet. That radio if placed too close to the bed could put gauss force on the corpuscles of your brain that isn’t normal or healthy, to the result ever after of late night wakefulness. As a farmkid the ploy was to adjust the volume to be just barely audible, so your parents on the floor below didn’t hear you listening, only to be ratted out by a static signal so sharp it woke my father, who bellowed into the ceiling his own report. You can be concussed by listening to late night AM radio.

“Do you know what time it is?” he challenged. I didn’t, seems the ball game was over and I was now into the late night power of prayer via the Seventh Day Adventists of Chisholm, Texas, they of rattlesnake fame who regularly proved their power with God to suppress serpents. Later to learn their trick was to wear sections of stovepipe inside their overalls while singing melancholic hymns. I was raised Methodist, whose relaxed spiritual posture was to believe redemption was just the right brand of soap, that with a touch of lye one could be cleansed of grease, sin and freckles.

FM radio ruined all this, sometime after Buddy Holly, sometime after Elvis, sometime before The Beatles, after the Braves left Milwaukee, FM radio came and ruined late night radio with its smooth sonorous signal. Every Tom, Dick and Harry village and hamlet had an FM station whose signal could pollute the night with crystal clear rock and roll that didn’t get kicked about by cumulonimbus on the far side of Iowa. FM rock and roll didn’t need the help of stratocumulus to make noise over Dubuque that turned the Grand Ol’ Opry into rock music whether it wanted to go there or not.

I still listen to late night radio, mostly BBC, that jumbled inarticulate sound of the BBC is the same as AM radio. Imbedded reporters using cell phones on the far corners of the planet, saying unintelligible things; floods in Thailand, car bombs in Syria, female mutilation in Nigeria, the really good thing about news is how it makes you feel comfortable just where you are.

My bedroom is still at the top of the stairs of a square white farmhouse, still sharing the bed with a dog, if I do miss that small earnest glow of AM radio.