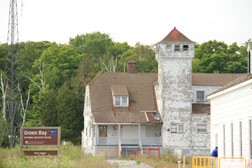 Plum Island – as in plumb in the middle of Death’s Door between the main peninsula and Washington Island – is a small island with a big history. And, it is very close to being open to the public on a regular basis. I was fortunate to be able to “investigate” this island, first hand, on August 26, the second of two public access days in 2014, though that is soon to change.

“This year was sort of an experiment,” Jim Robinson, of Shoreline Charters told me on the way over to the island. “In 2015 we hope to regularly have day charters going to the island from Memorial Day to Labor Day.”

More than 20 years ago, the Coast Guard’s search and rescue facility on Plum Island was shifted to Washington Island and the buildings on Plum Island boarded up and closed. The island was on the list of property to be disposed of by the federal government but was fortunately transferred to the auspices of the U.S. Fish and Wildlife Service. The island’s automated range lights still serve as a maritime guide through the hazardous waters near the island and the shoals around it. 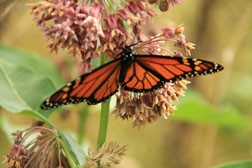 Since 2007, Tim Sweet and the nonprofit organization The Friends of Plum and Pilot Islands (FOPPI) has worked in partnership with the U.S. Fish and Wildlife Service to restore, preserve, and manage the island’s historic and cultural resources. This summer volunteers have been busy mowing trails, putting up trail signs, and assisting with archaeological digs on the island.

Admittedly, the island is not for everyone. Plum Island affords a visitor solitude and time to walk and explore the island’s three trails, two through the interior and one that goes around the circumference of the island. The island is considered part of the Green Bay National Wildlife Refuge and the rear range light as well as the life-saving and light station are included in the National Register of Historic Places. Wild raspberry bushes and clusters of milkweed, monarch butterflies, rocky bluffs, water lapping at the shore: it’s a photographer and nature-lover’s dream place. 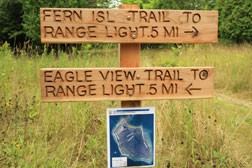 A few days after my visit to the island I met and spoke with Joan Zorn, daughter of Sylvia Landin who married a man from the U.S. Coast Guard and was stationed on Plum Island in the late 1920s and early 1930s. Zorn was born on Plum Island and spent the first six-to-seven years of her life there along with her siblings roaming the island’s environs watching the osprey, eagles, egrets and blue herons. She shares with me her experiences of walking across the island to play with other Coast Guard family children and not having any fear of snakes, bugs or water. “I wonder how many children today have that freedom to explore?” she ponders.

And that’s the beauty of public access to Plum Island – a visitor will now have that freedom to explore.