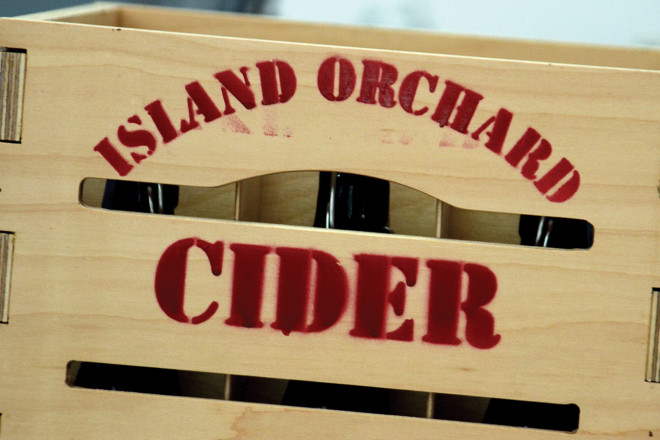 “It all began with a photograph I took of a glass of cider at a castle in Brittany,” Robert Purman said, when 15 years ago he and his wife Yannique were visiting her French father on a bicycle trip.

Hard cider is a traditional drink in Brittany and Normandy, Yannique Purman explained, often “served with galettes and crepes in creperies, but popular in other restaurants, too.” 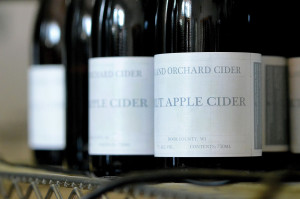 “I realized that something was missing from the American industry,” Robert said and decided that cider would be “a good beverage to develop in Door County as it has a similar microclimate” to northern France, a region that can grow apples but not traditional wine grapes.

“I started experimenting early on,” he continued, “small batches, apples from different orchards.”

In addition to experimenting, he began reading about the cider process, attended seminars, apprenticed himself to a cidery, and in 2005 and 2006, planted 1,000 apple and pear trees on the couple’s property on Washington Island.

Now those trees have begun producing fruit, making Island Orchard Cider a reality. Last year the business sold out its inventory of 2,000 bottles; this year, the Ellison Bay facility has the potential of producing 17,500 bottles of Normandy-style hard cider. 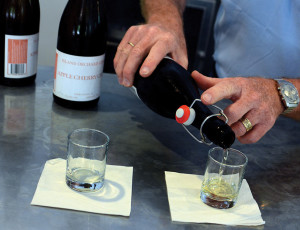 Normandy-style sparkling hard cider is an artisanal hand-crafted product similar to wine, texturally resembling champagne in its color, clarity, and effervescence, but with a lower alcohol content (seven percent). Since the Middle Ages Normandy has been producing hard cider, less sweet and lower in alcohol than its English counterpart.

He discovered a nursery in upstate New York with a bio-diverse collection of apple cultivars and to date has ordered 29 different varieties custom-grafted from Normandy and Brittany, as well as English and American, stock. Today his orchard on Washington Island grows 1,500 apple and 400 pear trees, and he works cooperatively with Seaquist Orchards both for supplemental fruit and for use of their press. 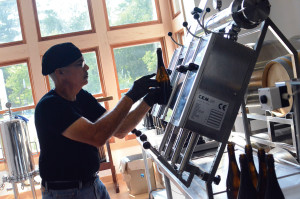 The building housing Island Orchard Cider has had many lives, including a commercial fisherman workspace, a truck garage, an apple and potato storage facility, and a furniture store. Renovations of the facility include geo-thermal heating and cooling, Italian fermentation tanks, bottling and labeling stations, and a tasting room with custom-designed furnishings based on an apple crate motif.

Tasting room host Mike Bahrke pours five samples for customers who often exclaim, “This isn’t what I thought! Oh, this is good.”

Bahrke, who assists with the cider operation, gives visitors a tour of the plant and an explanation of the process. “Until 1850,” he explained, “hard cider was the drink of Americans.” When German immigrants brought beer to this country “hard cider fell by the wayside.” But now it is experiencing a resurgence of popularity. 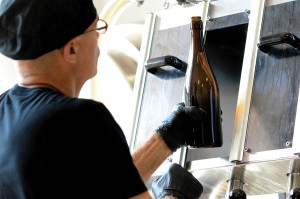 While aficionados find the chilled beverage refreshing by itself, it also replaces white wine for a dinner of fish or poultry, or it pairs with cheese, seafood, shellfish, spicy dishes, cream sauces, apple deserts, crepes, and even donuts.

“We were looking for a new business to develop and keep running for 10 or 20 years,” Yannique said. And the cidery seemed perfect. As a partner, she deals with the marketing and business end, while Robert is in charge of the orchard and cider production.

“The thing we love about the business is it is based on a seasonal farm product. Our life has been based on chaos,” he joked, referring to the film production company the couple owns in Milwaukee. “Now we have a schedule dictated for us.” While any agricultural production brings with it variables, the Purmans know that they will tend the orchard during the summer, make cider in the fall, and deal with bottling along with marketing concerns during the winter. To every thing there is a season. 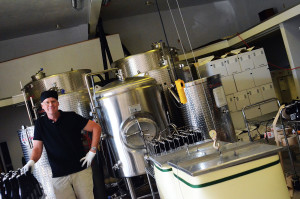 While the art of making Normandy-style cider lies in blending specific apple varieties, the craft involves harvesting and crushing the apples and macerating them briefly, pressing them, storing the juice in a vat with the addition of yeasts for 2.5 to 3 months for fermentation, and bottling for additional fermentation and trapping carbonation. Island Orchard Cider produces Brut Apple Cider, Brut Apple Oak Aged Cider, Bright Apple Cider, Apple Cherry Cider, and Apple Pear Cider.

The Cookery in Fish Creek is one of several restaurants in Door County offering Island Orchard Cider. Owner Courtney Holdmann Skare “stumbled across their tasting room and was excited to see a local cider product.” She serves the Cherry Apple Cider by the glass or bottle. “It has done well,” she said, “has received a very positive response.”

“People drink Island Orchard Cider in a restaurant and find it good,” said Kaaren Northrop of Egg Harbor’s Main Street Market “and are looking for a quality Door County product to take home.” As does Skare, she likes to support a local, small-family business. 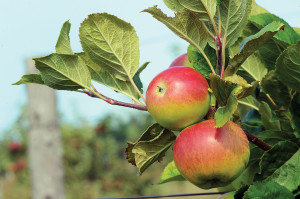 And she finds that health-conscious customers like a beverage lower in alcohol than wine (seven percent) and gluten-free unlike beer.

Dede McCartney of the Madison Avenue Wine Shop in Sturgeon Bay noted “cider is the most popular drink now. I sell more cider than beer.” People come looking for Island Orchard Cider, she said, because “It’s very crisp, dry, and refreshing.” And, she added, “The bottles are awesome!”