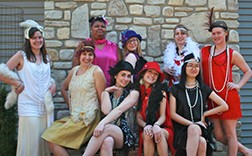 The Flappers at the Dil Pickle Club. Submitted phoyo.

This past May, an original play, Dear Rhoda, was previewed on Washington Island by Island Players. The preview of the play was sold out and was met with much enthusiasm from the audience. The newly opened Hotel Washington hosted the preview. It was a fun event that included a buffet dinner and an audience in 1920s-era costumes. The purpose of the May production was to get the audience reaction to the play before it is revised for production in summer 2016.

Island Players is the community theater group that has been serving the island for more than 30 years. Every year, Island Players produces a winter and summer play, sponsors a children’s summer camp, play readings, school programs and several other theatrical events throughout the year. The preview was one of their 2015 events.

Dear Rhoda was conceived when Donna Russell, a longtime island resident, bought a trunk at a garage sale on the island. The trunk stayed in the Russell garage for 20 years before Donna and her husband, Larry, finally opened it and found a treasure trove of love letters written in the 1920s to a woman named Rhoda Katz, who was confined to a TB sanitarium. The letters were from her lover, and later husband, named Jerry Nedwick, a Chicago book dealer. The trunk also contained clothing and other personal items. It took Donna another 10 years to put a pen to paper and turn the love letters into a play.

“Doing a writing project was on my bucket list. But before this, the longest thing I had written was a grocery list,” said Donna. 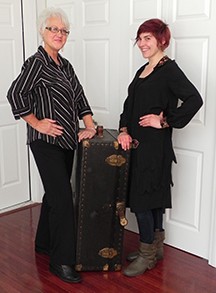 Donna Russell, author of the play “Dear Rhoda,” and Rylee Johnson, the lead in the play, with the trunk that started it all. Rylee is wearing one of Rhoda’s dresses that was in the trunk. Submitted photo.

Initially, Donna was going to turn the letters and story into a book. But, as Donna commented, “As I began to put the letters together for the book, I could hear music and that is when I realized I wanted to make the story not only a play, but one that included the music and dancing of the era.”

The play, Dear Rhoda according to its author, “is a love story that needed to be told. This story haunted me and became part of me and I wanted to share it.”

The play has become not only a love story, but also about Chicago in the 1920s including its music, dancing and politics. The main character, Rhoda and her husband, Jerry Nedwick, frequented many of Chicago’s clubs and theaters. Consequently, the play includes performances by actors who portray Sophie Tucker, Fanny Brice and Carl Sandburg. A 1927 Ziegfeld Follies Charleston dance number is also part of the play as well as scenes from a unique venue for music, drama, poetry and politics of the time called the Dil Pickle Club.

Rhoda and Jerry lived in a “bohemian” area of Chicago known as Tower Town, a neighborhood that included writers, artists, entertainers and political activists who made up the core of Rhoda and Jerry’s circle of friends. And they all show up as characters in the play.

Many islanders have joined in the project and encouraged Donna to produce the play on the island. Over the past winter, Donna worked with Dave Ranney, a frequent Island Players’ director and actor, who edited and added to Donna’s original script. Dave directed the preview and along with Donna and Rylee Johnson, is developing it for a full production in the summer of 2016. 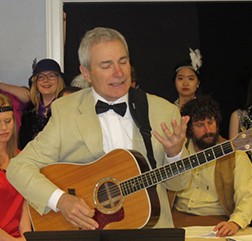 Rylee Johnson played the lead, Rhoda, and assisted in its production. Rylee is a Washington Island School 2009 graduate, Island Players Board member, and currently works at the Washington Island School as an Instructional Assistant. This was Rylee’s tenth Island Players production. Doc Westring is the play’s Music Director. Kate Kaniff, with assistance from Sarah Peters, is the dance choreographer.

The many people who wanted to see the preview but were unable to attend because it was sold out will have another chance to see the play in the summer of 2016.

Island Players presents Cat on a Hot Tin Roof by Tennessee Williams, directed by Andy Sachs, July 17 & 18 at 7:30 pm, and July 19 at 3 pm, at the Trueblood Performing Arts Center.