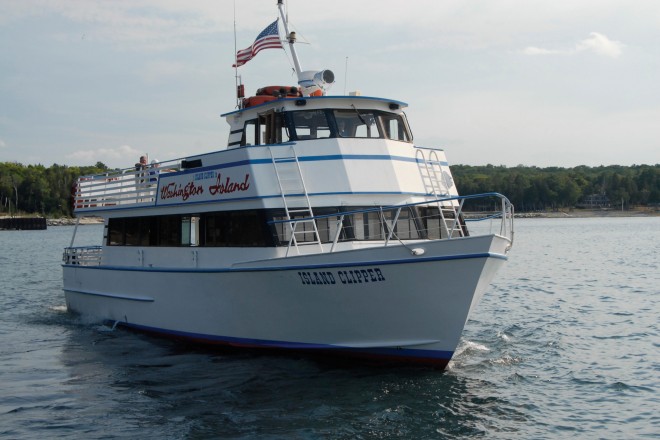 Name-dropping takes on a whole new meaning in Door County. Names that mean something on the northern portion of our peninsula don’t have much to do with the “Branjolinas” of the world. Names like Johnson, Weborg and Nelson are much more apt to command attention and respect. One name that is synonymous with our local waters is Voight, specifically Charlie Voight, in Gills Rock. Charlie is a trim, soft-spoken man with an easy manner. One look at him settled in his wheelhouse and you know that this is a man who is comfortable on the water.

Charlie Voight has been captain of both the Island Clipper and its sister vessel, the Yankee Clipper, for more than 30 years. The Island Clipper is a 65-foot, 149-person passenger ferry that was built in Louisiana to Charlie’s specifications. It was constructed back in 1987 and it took nine days along with 21 of Voight’s good friends to bring her up via the Mississippi.

Climbing aboard the Island Clipper you immediately notice how clean and well maintained it is; above and below decks look freshly painted and there is not so much as a Kleenex out of place. The wheelhouse is the same, well equipped and comfortable for the veteran captain. As we pull out of the dock area, I am amazed to see that Charlie barely turns around as he backs his twin engines out of the tight dock space. The ferry takes its time, venturing close to the shoreline of Plum Island with Charlie’s intermittent recitation of information about the islands and surrounding waters. We crisscross our way through the ferry lanes waving at the many commercial and private fishing boats along the way. Pulling into Detroit Harbor on Washington Island can be a tricky experience – as an avid boater, I know that the channel markers must be strictly obeyed – one foot out of the channel and there is an imminent risk of running aground. The water is shallow and there are rock outcroppings everywhere, which can cause very serious damage. As Charlie adroitly slides into his dock space, I mention that the water looks only a couple of feet deep. “It is…right there,” Charlie says as he points toward, but doesn’t glance at, the starboard side of the boat.

In his 30 years of running the ferry, Charlie has seen lots of weather but claims that he very rarely has to cancel a trip. High winds and waves don’t seem to worry the expert captain, but he remembers a time a few years back when a water spout passed right over the ferryboat, took everything off the roof of the boat, and forced captain and crew to take cover under Door Bluff to wait out the storm.

Charlie’s other ferryboat, the Yankee Clipper was in ferry service from 1971 until 1987 and continues today as the “backup boat.” It is 53 feet long and was also well known for the “Sunset Concert Cruise,” an idea started by local folk musician Gerhard Bernhard. The concert cruises were a narrated, scenic tour with music and a buffet dinner catered by Charlie’s cousin, Phil. After more than 20 years and 80,000 guests, Charlie and Gerhard decided, much to the chagrin of many loyal customers, to end the concert tours. When I asked why, Charlie said that it was his “semi-retirement.” I don’t know of many people who consider dropping from six trips a day down to just five “semi-retirement,” but then I don’t know many people like Charlie.

Charlie was born in Wisconsin but moved with his family to Skokie, Illinois as a child. Charlie’s father ran a fish market out of Skokie. The family divided their time between Skokie and Florida but always spent summers in Door County. Charlie spent three years in the Navy, then attended Florida State University and graduated with a degree in government. In 1969, Charlie decided to make the permanent move to Door County where Charlie’s father had created a summer fish market in Gills Rock that was similar to their Skokie beginnings. Although Charlie and his brother were fishermen, Charlie decided to get a teaching degree at the University of Oshkosh since year-round jobs in the county were not as plentiful as they are today. It was there that he met his wife, Bonnie.

Bonnie Mann was certainly no stranger to Door County; in fact, Mann is as big a name as any to drop when you are on Washington Island. Bonnie’s family owned and ran Mann’s Mercantile, the island’s grocery store as well as other businesses. Charlie was very familiar with other members of the Mann family (his own mother is from the island, as well), but it took a chance meeting in Oshkosh to connect their Door County roots.

Charlie received his teaching degree and spent time substituting at Gibraltar as well as adding a commercial fishing business to complement his father’s smoked fish shop. Charlie and his cousin, Phil Voight, fished together on the fish tug Susie purchased for them by Charlie’s father, Leroy. Eventually, Phil was pulled toward the restaurant business running the Shoreline Restaurant and eventually starting Voight’s Supper Club (now the Mink River Basin). In 1966, the idea for the passenger ferry was born and they started with their first boat, the Bounty, a 28-footer that shuttled tourists to Rock Island. There was also the Bounty II and eventually, in 1971, the Yankee Clipper joined the fleet and began bringing people to Washington Island.

Once visitors reach Washington Island, Charlie’s passengers are invited to catch a ride on the Viking Train, a 90-minute, guided tram tour of the island that makes four stops for sightseeing. Passengers are encouraged to de-board and re-board at any of the pick-up times. For those who are more energetic, bikes are welcome on the ferry at no extra charge or bikes and mopeds are available for rental once you reach the island.

Over the years Charlie has altered routes and schedules to fit tourists’ demands. At times there were regular runs to Fayette, Michigan, a reconstructed “ghost town” on Michigan’s Upper Peninsula and a favorite day spot for picnicking boaters. When I asked why those runs are a thing of the past Charlie smiles and says, “One day we had full boats to Fayette; the next thing you know, the boats were empty.” A simple rationality that has kept his family in business for many years.

Even at 67, Charlie still does every run of the six-mile trip to the island. In the heart of the season, that consists of five runs a day and also includes special charters for private parties, reunions or birthdays. When asked what happens if he were to get sick, Charlie replies with a grin:  “You don’t get sick. That’s what we do in the off-season.” Voight’s wife, Bonnie, and daughter-in-law, Jill, run the retail shop which features locally-caught fresh-smoked fish. One of Charlie and Bonnie’s two sons, Chris, runs the smokehouse and serves as a captain when needed for the Yankee Clipper. I asked if, at 67, Charlie was thinking at all about retiring, and his response was that he thinks that he still has a few good years left, but he knows that Chris is willing and able to take the helm when it’s time.

“I bet you could do that run with your eyes closed,” I say, trying to calculate the number of times he has done it…30 years, five months a year, five times a day (or more)….I give up.

Charlie smiles again and looks out over the water. “Many people have said that very thing to me,” he says. “I wouldn’t want to try; that’s just when it will turn around and bite you!”

As I write this I find myself thinking about Charlie out on the water. The skies are growing a menacing color of blue and I hear the rumbling of a summer squall. Somehow, I think that Charlie will be just fine–and I know his eyes are wide open.