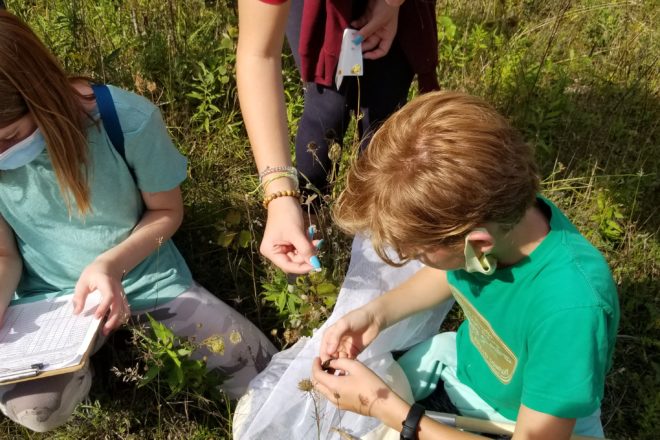 Washington Island seventh-graders work together to tag a monarch on Plum Island.

“The island can limit their elective opportunities, but not their opportunities to connect and make a difference in their own community.”

Just after Earth Day, the district became one of five in Wisconsin and just 27 nationwide that the U.S. Department of Education named as a Green Ribbon school. To be considered, Principal Michelle Kanipes, with help from staff members, completed an application that listed the wide range of environmentally friendly projects, practices and activities at the school.

“It’s wonderful to have our school recognized,” said Kirsten Purinton, president of the Washington Island School Board.

Schools that earned the honor had to demonstrate adherence to the three “pillars” of Green Ribbon status: reducing environmental impacts such as water, energy and greenhouse gases; improving health and wellness by promoting a healthy physical environment throughout the school; and “offering environmental and sustainability education, including civic learning, green careers and STEM connections.”

District efforts included the two solar arrays outside the school, replacing windows and the heating and ventilation system for improved efficiency, and installing touchless plumbing fixtures to save water and for sanitary reasons, Purinton said. In addition, all students have their own cleanable beverage containers to save water. They also make a habit of not using plastic and aluminum bottles and cans.

In addition to these efforts to reduce, reuse and recycle, the students continue to work on reforestation around the school to help reduce carbon in the atmosphere and create a long-lasting outdoor classroom.

These efforts began with students planting a wide variety of trees around the school over the years, then pruning them and cultivating around them. They use some of their class time to track the growth and condition of the trees and then analyze their data to see which trees fare best and the impact of pruning on them.

Both students and staff are working with the nonprofit organization Gathering Ground to design, plan and submit proposals to the school board for an outdoor classroom space and to help develop a nature trail. The students are deciding what sorts of fixtures and plantings to have in the outdoor space and are developing a design and cost analysis.

“They are making calculations and spreadsheets and sharing ideas, and then they will go to the community and seek support or donations,” he said.

Verboomen worked with middle school math and science teacher Miranda Dahlke on some of the environmental-themed science, technology, engineering and math (STEM) programs. They also coached the school’s SeaPerch underwater robot-operated vehicle teams, which took five of the top 10 places at the regional competition. A four-student SeaPerch team has also qualified for the international competition in June in Maryland.

Dahlke also pitched in when Verboomen and the students launched an award-winning plan to curb the spread of an aquatic invasive species. Verboomen’s students designed and built traps to try to eradicate as many gobies as possible, and they earned first place in the state and a $6,500 grant in the Samsung Solve for Tomorrow competition.

Verboomen said the students hope the traps they designed, built and placed in the water at two marinas will protect some smallmouth bass nests from the nonnative invaders.

“We have speakers out there underwater playing male goby sounds,” he said. “We’re hoping those will attract female gobies. So far, they caught two minnows and a crayfish.”

When they do catch some gobies, they’ll “put them back into the system” by feeding them to seagulls or donating them to a local fertilizer maker.

Dahlke said she wants to provide students with as many real-world learning experiences as possible.

“The island can limit their elective opportunities, but not their opportunities to connect and make a difference in their own community,” she said.