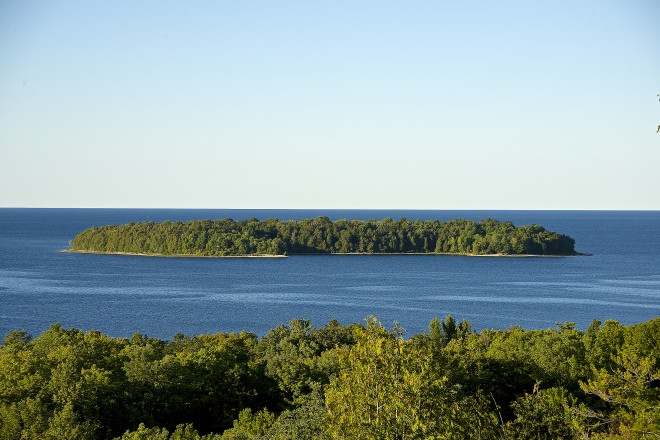 Horseshoe Island is viewable from above at the top of Eagle Tower in Peninsula State Park. Photo by Len Villano.

Door County, this spit of the Niagara Escarpment, is truly a dynamic bit of land – in history, in culture, in nature. I’ve spent a large chunk of my life traversing and exploring this peninsula, noticing here and there the dots of land on the horizon:  Adventure Island, Horseshoe Island, Detroit Island. I might stop by one or two on a boating venture, swim and drink a beer with little thought to the island itself. After all, it’s just a bit of land.

Then I did a little research and a little more and then much more. I read about nomadic Native Americans, early white explorers, a cholera outbreak, too many shipwrecks to count, friendly ghosts, brave lighthouse keepers, suicidal lighthouse keepers, and birds, lots and lots of birds, all on the islands that surround Door County.

“These islands are very much a part of Door County history,” notes Paul Burton, co-author of the book Door County’s Islands. Written with his wife Frances Burton, each chapter of the book focuses on a specific island. “There is so much wonderful history up here,” Frances said. “You just start digging and, my gosh, it’s really interesting.”

“We were surprised by the number of islands,” Paul said.

“We thought 10 or 12,” admits Frances. “It was really fun to learn all this stuff. We discovered islands we had no idea existed.”

There are 27 islands surrounding Door County – the couple flew over each and every one.

“Some are owned by the government, some are privately owned, and some are inaccessible – like the Sister Islands, you can go there but you don’t want to. They are covered with bird guano and lots of birds and stinging nettle,” Frances said. “It wouldn’t be a pleasant visit.”

The couple spoke to friends and strangers, visited Door County museums and libraries, collected stories and information. “History preservation in Door County is growing and growing,” Frances said. “There wasn’t much preservation of history when we started writing books, but now it’s expanded.”

Though they agree that “Washington Islanders have a huge sense of their history. They are very interested in preserving it, documenting it,” Frances said.

“Most of them are very proud to be Islanders and to be outliers as it is,” Paul said.

Door County history boasts its fair share of outliers – even today – on the mainland and off, a slew of characters who make this community what it is today.

This peninsula and surrounding islands would not be one without the other.

The primary resource for this information is Door County’s Islands and an interview with its authors Paul and Frances Burton, though other books and sources contributed greatly:  Horseshoe Island:  The Folda Years by Stanford H. Sholem; Door County:  Wisconsin’s Peninsular Jewel by Bruce Thomas; Door County Maritime Museum, and Door County Visitor Bureau. 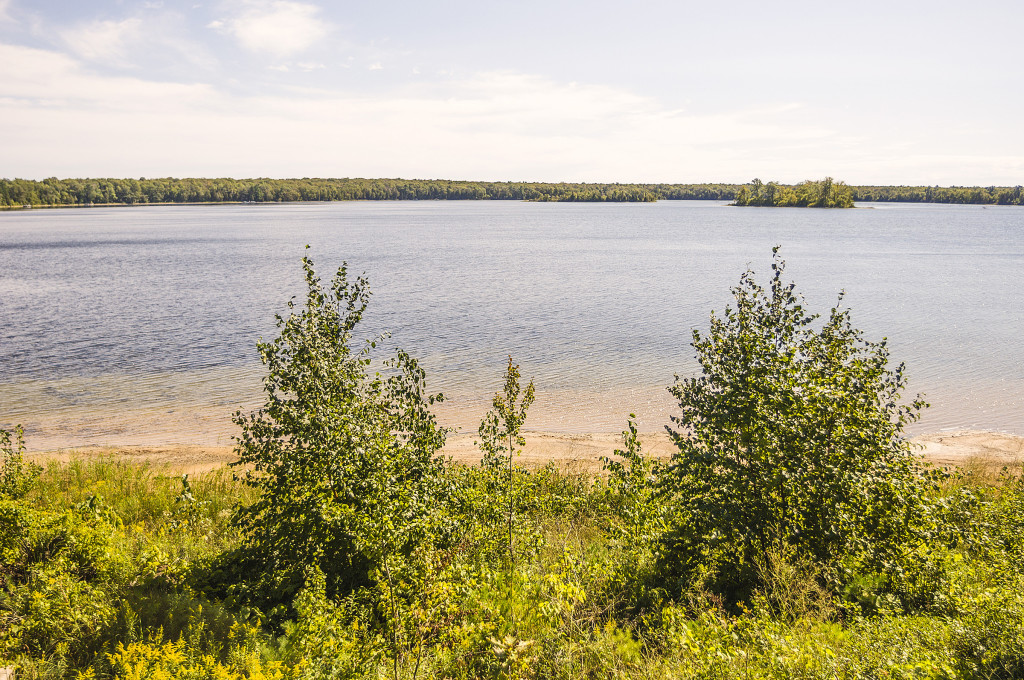 One of the largest of Door County’s islands, Chambers has its own inland lake and several homes. Photo by Len Villano.

“She gave him release from what was bothering him, she removed his unhappiness so he could be at peace,” Frances added.

“She exorcised the lighthouse, I guess,” Paul siad.

Chambers Island is accessible by boat, though public transportation and access is not available.

“It’s big and divided up and there are lots of people who own cottages out there, so you know, you don’t go trampling around in their yards,” laughs Frances, adding, “The people who live out there are a real hardy bunch and they’re real proud of living out there.” 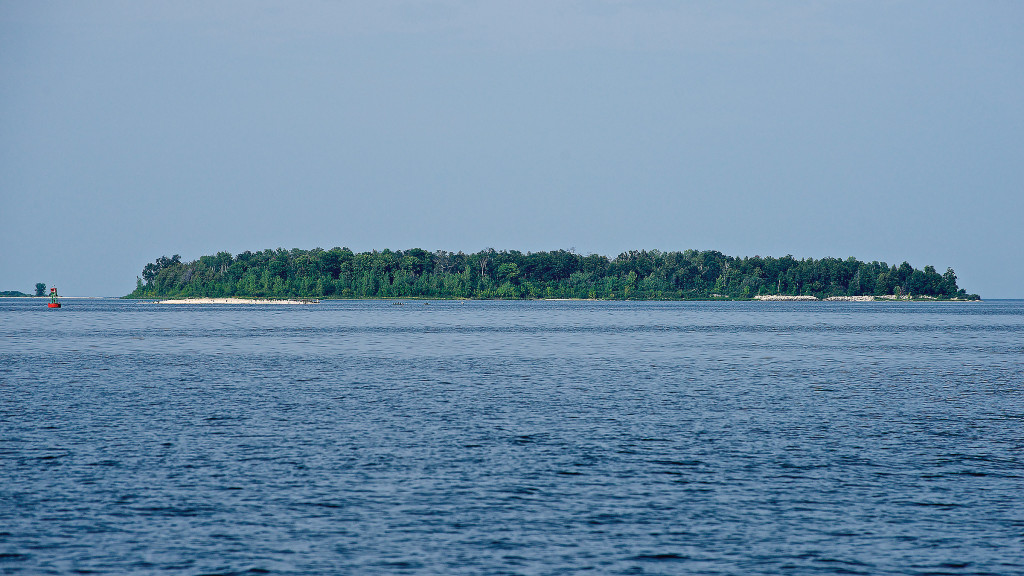 “It was a tremendously unusual camp. Skipper Kinney wanted to bring out the potential in each boy and to do that he gave them ultimate responsibility and ultimate freedom,” Frances said.

Immediately after purchasing the island, Kinney recruited boys and men to build a 36-foot replica of the historic Norwegian Viking ship in Winnetka, Illinois.

In early July of 1925, Skipper and the crew set off on the 200-mile trip to Adventure Island and so began a 27-year venture that many former campers look upon as some of the greatest days of their lives.

“It was a fabulous, fabulous camp,” Frances said. “In the morning they would have what they would call ‘council’ and all the boys would sit around Skipper and tell him what they wanted to do that day – each one individually. Unless it was dangerous, he would say, ‘Fine.’ One of them built a kayak, a couple of them dug a pond behind their cabin and filled it up with little fish and frogs. It was fabulous.”

“Needless to say, the kids who went to these camps were usually from very well-to-do families,” Paul added.

“People loved to see the Viking ship come in,” Frances said. “People standing around on the dock were just entranced, what a sight! I think Adventure Island was so well known because of that Viking ship. It was a big, big deal.”

Each island is privately owned.

Underwater cables provide electricity to the island and Wittig has solar panels on the roof. “In the winter they go across the ice, in the summertime, they canoe,” Paul said.

These islands are privately owned, though cottages are for rent on Idyll Wood Island. 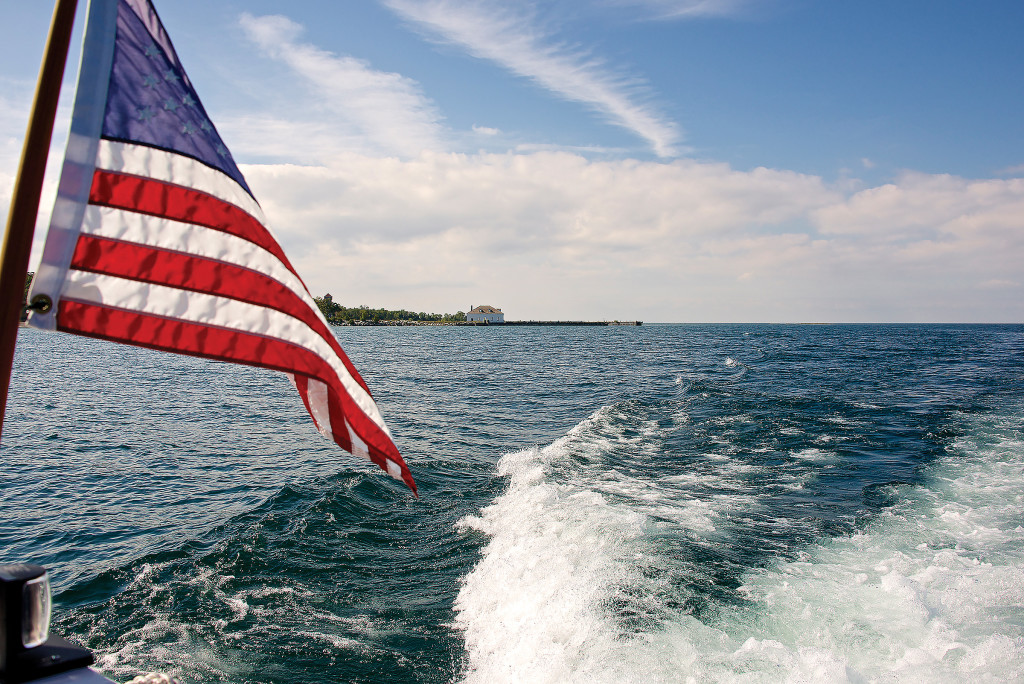 Detroit Island in the distance. Photo by Len Villano.

The island is privately owned. The best way to see Detroit Island is by riding the Washington Island Ferry. 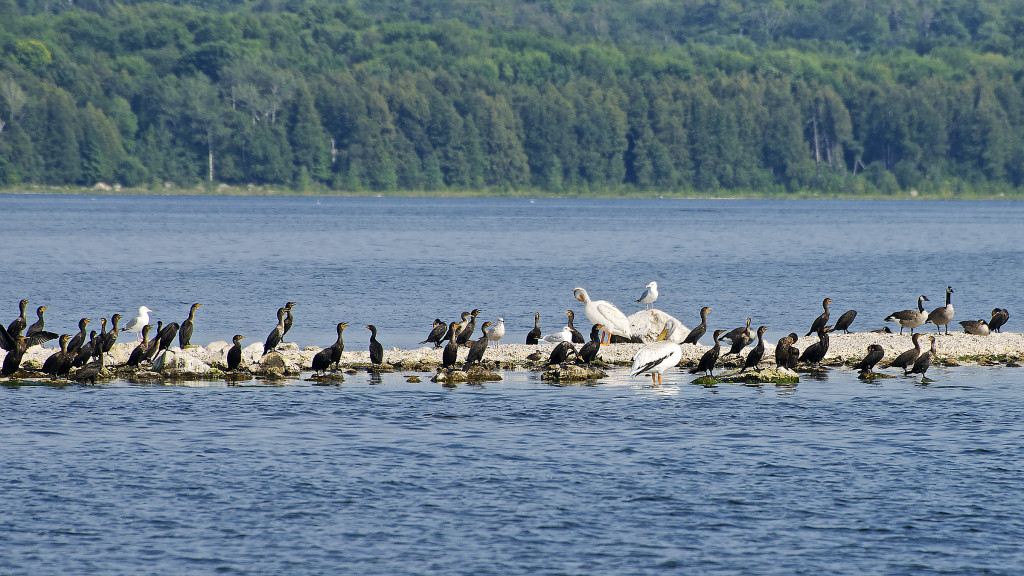 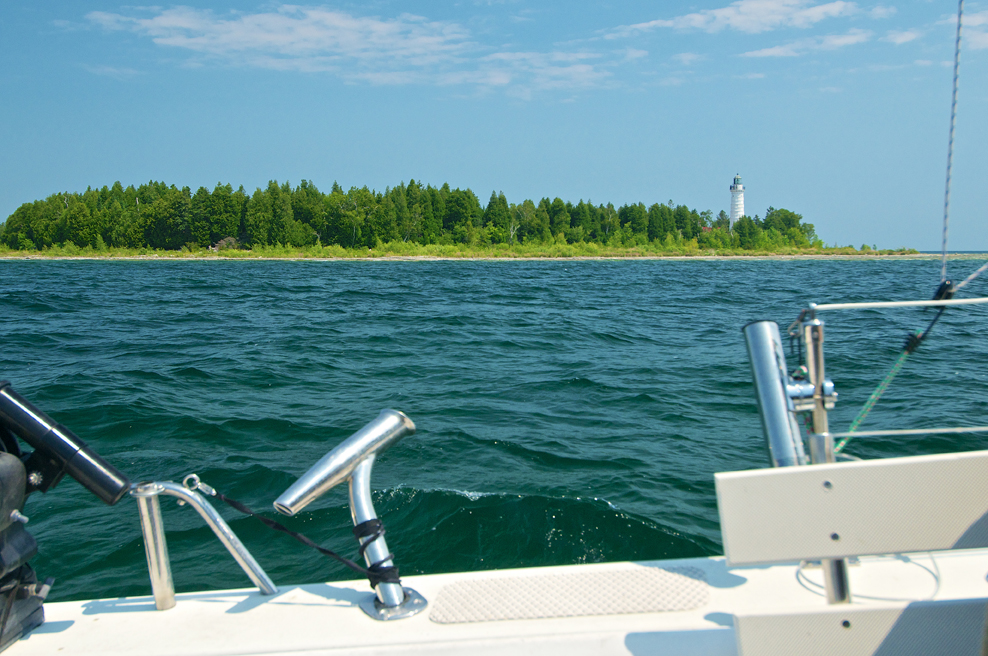 Cana Island is home to one of the most-photographed sites on the peninsula, the Cana Island Lighthouse. Photo by Len Villano.

“Cana Island is very important because there were no lighthouses along the eastern shore of Door County,” notes Paul. “Once you left there, you didn’t hit anything until you got to Pilot Island.”

The wreckage rusted away for two years not far from the island before a tug arrived to strip the ship of anything of value. Five years after the wreck, another team arrived to ultimately remove the ship, cutting the hull in strips and shipping them on barges to Cleveland, Ohio.

When Billy destroyed doors and windows in a panic during a particularly frightening thunderstorm, the family decided to offer him to the Lincoln Park Zoo in Chicago.

Cana Island Lighthouse is accessible by walking across the causeway (when the water is not too high). Visitors have the option to visit the lighthouse daily, 10 am – 5 pm, from May through October. The island has no docks and a shallow, rocky shore. Boaters beware of scraping the bottom of your hull and sinking like the M. J. Bartelme. 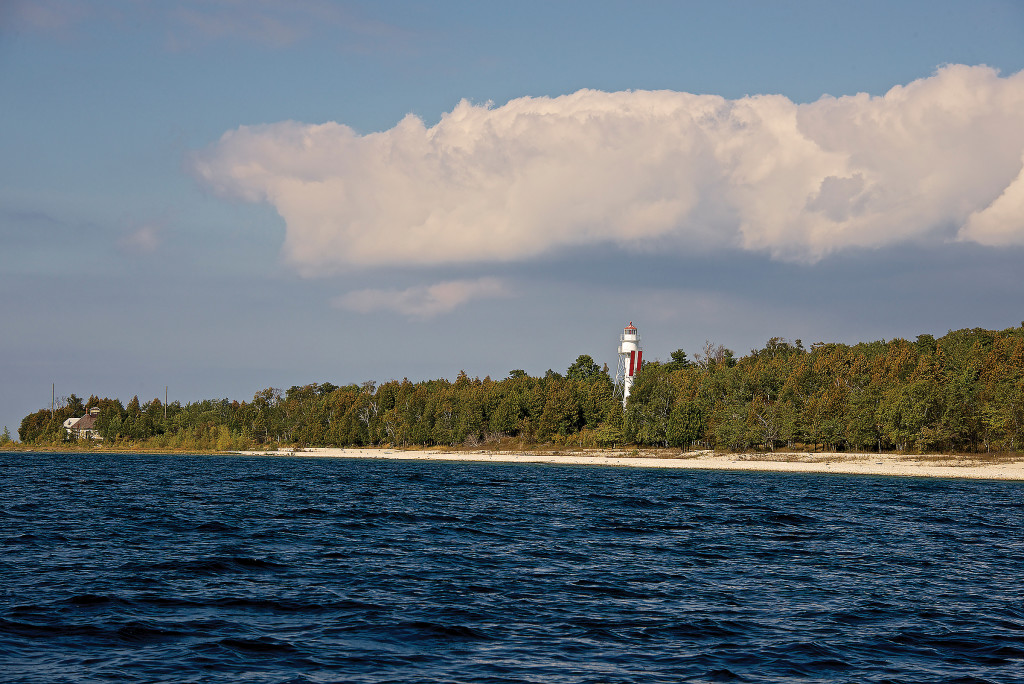 “One of the most interesting islands to me is Pilot,” Paul said. “It’s way out there, it’s barely above lake level, and has a very interesting history. It has three schooner wrecks on that island at one time and it’s so far out, it’s sort of the gateway island to Death’s Door and it claimed a lot of ships because it’s shallow around the island.”

Plum Island is 300 acres, 1.8 miles from the tip of the Door Peninsula and Pilot Island is 3.8 acres, just south of the southeastern tip of Detroit Island.

The government responded to his observations by establishing a U.S. Lifesaving Station on Plum Island and providing funds to construct range lights, houses for personnel and their families, fog horns and more.

Knudsen was relieved of his duties at Pilot Island to oversee construction of Plum Island’s new station.

Private tours are sometimes available. Jon Jarosh of the Door County Visitor Bureau hopes that in the coming years both islands will be easily accessible to the public.

These small islands are “for the birds,” literally. Unless you love bird dung and scraping the bottom of your boat, stay a safe distance away.

These three little islands are very small; their area depends on the lake level.

All three islands are owned by the U.S. government.

The islands encompass about two acres, a mile from the shore of northern Sister Bay.

“I remember wading along thigh-deep in dead alewives,” Lukes told the Burtons. “The stench was terrible.”

The islands are owned by the state. 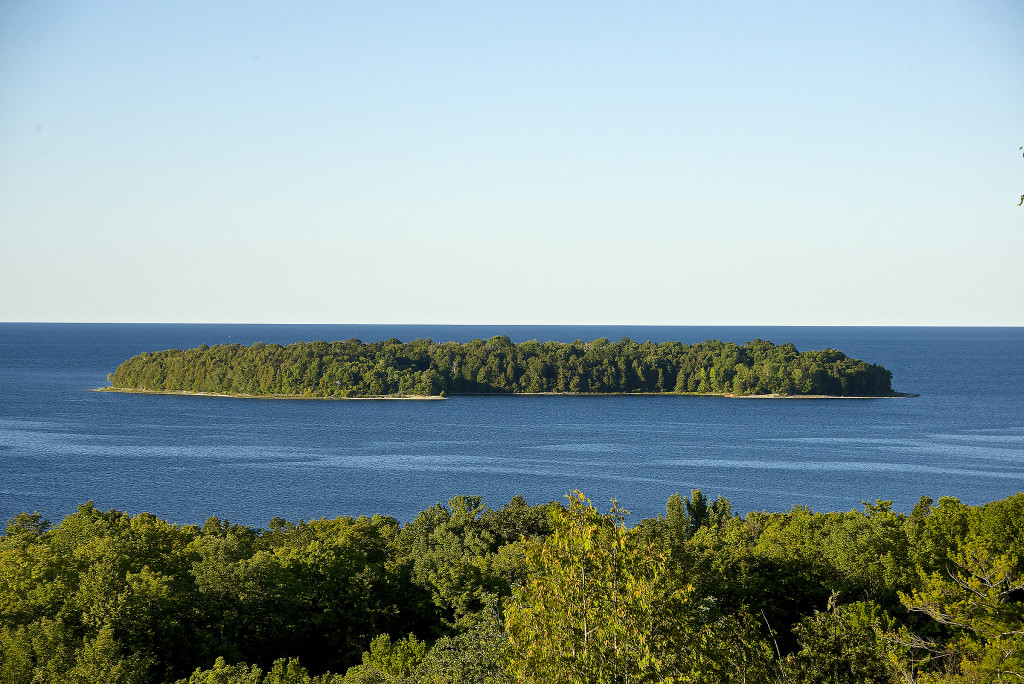 Horseshoe Island is a favorite spot for kayakers to paddle to from Nicolet Bay in Peninsula State Park.

38.2 acres, 1.5 miles from Ephraim, less than half a mile from Peninsula State Park.

Engelmar began to take shape in 1910. Well-known builder Sam Erickson of Sister Bay oversaw the project. By 1912, the elaborate and large lodge was complete, along with the dock, a terrace and rambling path around the perimeter of the island.

Between 1915 and 1920, Erickson built a frame house for domestic workers, a caretaker’s cottage, an ice house and a pump house.

The Foldas liked to throw formal parties on the island including dinner parties, afternoon teas, luncheons and birthday parties.

Due to limited space and information, three islands are not highlighted:  Little Susie Island, Big Susie Island, and Snake Island. We encourage you to stop by a Door County library or museum to learn more!