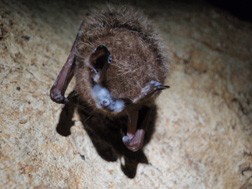 Samples that were pending from 19 caves and mines in Wisconsin tested negative for white-nose syndrome, confirming that as of April this year the deadly bat disease was isolated to a single site in Grant County.

The samples were collected as part of a routine follow up during the surveying of 135 mines and caves. Visual surveys of the remaining 116 sites did not find any other signs of white-nose syndrome.

“Results were negative on follow-up surveillance and genetic samples at the caves and mines closest to the disease epicenter,” says Paul White, a conservation biologist with the Wisconsin Department of Natural Resources. “We will continue to work with science advisory groups, stakeholders and partners to discuss and identify the best management practices in efforts to slow the spread of this disease.”

People who see sick or dead bats, especially between October and March, are encouraged to report them to the DNR. Citizens can find the reporting form and instructions for how to safely collect carcasses of dead bats on DNR’s Bat Program website. People should not touch or handle bats without appropriate protective clothing.