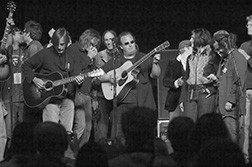 The road to preservation has been a long one, but the 10th anniversary of the Steel Bridge Songfest will be more of a celebration in success than a battle against the wrecking ball.

“You see people come here and they leave here completely changed. We have novice and experienced songwriters and when they leave here they are completely different people. It goes far beyond Sturgeon Bay,” said melaniejane, who organizes the festival with pat mAcdonald of the Holiday Music Motel. melaniejane came to Steel Bridge Songfest as a performer in 2007 and has stayed to help organize the event ever since.

The festival will celebrate 10 years this weekend with live music and a songwriting collaborative from both national and local artists. What has become an anticipated weekend with lighthearted music began as desperate attempt to save a historic Sturgeon Bay landmark.

The 84-year-old Michigan Street Bridge opened on the 4th of July, 1931 and was immediately dedicated as a Door County Veterans Memorial. The bridge design is categorized as a Scherzer-type, double-leaf, rolling lift. There is only one other bridge in the country with this type of structure.

But the Department of Transportation (DOT) was still looking to replace the bridge after it fell into disrepair starting with a freighter accident in 1960. Rehabilitation gave the bridge a little more life and it limped on until the late 1980s, when the DOT began plans to tear it down for a modern, concrete replacement.

In response to this, a group formed in Sturgeon Bay called Save Our Bridge. Their mission was in their name: don’t destroy this historic landmark of the Sturgeon Bay community.

Although the DOT’s evaluations made the bridge a candidate for rehabilitation, the department typically opted to rebuild 70-year-old steel bridges instead of maintaining them.

In 1997, the Advisory Council on Historic Preservation did not find the Michigan Street Bridge worthy of preservation, which cleared the way for the wrecking ball. The decision made the Save Our Bridge group mobilize further, becoming a registered nonprofit organization called Citizens for Our Bridge in 2005.

The nonprofit quickly submitted a new petition to the DOT, calling for another look at the possibility of restoration. The petition included nearly 500 signatures from businesses and Sturgeon Bay residents. These signatures were not only supporting the restoration of the steel bridge, but the construction of a new downtown bridge as well.

The petition included an alternative proposal to construct a bridge from Maple to Oregon Street. With a shorter distance and avoiding the costs of destroying the steel bridge, the project would cost the state less while providing an additional route into Sturgeon Bay’s downtown.

Still, the DOT turned it down, continuing their claim that the bridge was not worth repairing. Citizens for Our Bridge then sent their petition straight to the governor.

At the time, state law required bridges such as the Michigan Street Bridge to be replaced and not rehabilitated. Governor Jim Doyle’s 2005 budget bill included a new law allowing for rehabilitation. Meanwhile, the Federal Highway Administration also approved the construction of the Maple-Oregon street bridge. 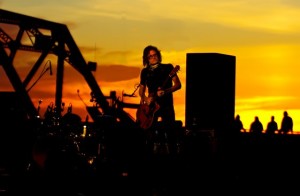 Throughout the debate, economic impact to Sturgeon Bay’s downtown was a primary concern. Whether the DOT would rebuild or rehab the Michigan Street Bridge, cutting off the north and south sides of the canal spelled danger for downtown businesses.

Following the approval of the second bridge, the DOT came up with a plan to keep downtown traffic flowing throughout the work on both bridges. Construction of the Maple-Oregon bridge began in 2005 and the day it opened, the DOT began rehabilitation on Michigan Street.

Although the bridge was saved, some people wanted to throw art into this government-sponsored rehabilitation.

pat mAcdonald, founder of the festival, enlisted his friend and fellow musician, Jackson Browne, to write a song about the bridge and perform it in Sturgeon Bay. The idea quickly turned into the largest music festival in Door County.

“The locals thought that they would never tear it down,” said melaniejane. “The locals are looking at all these outsiders coming in and writing songs about the bridge and they are like, ‘Why do all these other people care so much?’ and they started caring too.”

In 2007, mAcdonald, with help from investors, bought the Holiday Motel and turned it into the Holiday Music Motel. The motel is the center of operations for the week of events and every room is filled with musicians.

When the festival began in 2005 with one performance by a few friends, the goal was to raise awareness about a bridge. While a 10-year festival was not the original intent, “I think pat has always dreamed of it being an annual thing,” said melaniejane. “He has always wanted there to be an annual Steel Bridge Day.”

On its 10th anniversary, mAcdonald got his wish. At the June 2 City Council meeting, Sturgeon Bay proclaimed Saturday, June 13 as Steel Bridge Songfest Day in the city.

Steel Bridge Songfest takes place the second weekend in June with a songwriting workshop, the Construction Zone, the entire week leading up to the festival.

“It’s really become so cool that so many people have more of an increased interest in seeing original music. There are so many cover bands and this is something that gets away from that. People are seeking to be exposed to new music,” said melaniejane.

Participation in the workshop is by invitation only and songwriters collaborate to create music inspired by the steel bridge. Recording studios are open 24 hours a day through the week to document the songs written and performed by the invited artists. The songs recorded throughout the week are compiled and released as an album.

“There’s so many great musicians in Door County but a lot more of them are working hard to write their own songs. They believe in themselves a bit more,” said melaniejane.

Hundreds of performers have taken the stage in front of the steel bridge over the past 10 years and their efforts have been rewarded. In 2008, the Michigan Street Bridge made the National Register of Historic Places, furthering its level of protection and preservation.

Since then, the festival has served as a celebration of the accomplishment and a way for creative minds to share ideas in the open arms of the steel bridge.

“It’s not a fundraiser. In the early days it was geared to do that. It’s really a gift to our community,” said melaniejane. “Without Steel Bridge Songfest, I don’t think the bridge would be there.”

For a list of venues and performers in this year’s festival, held June 11 – 14, visit steelbridgesongfest.org, or check out this issue’s Annual Live Music Preview in Section 4.