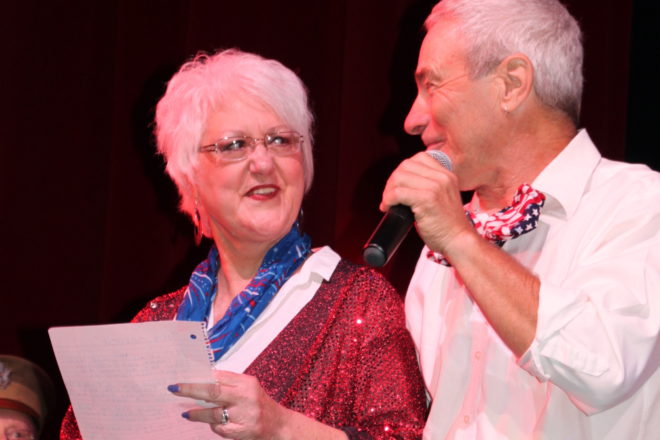 Donna Russell and Julian Hagen at the July 3 “Salute the Troops” concert. Submitted.

As a surprise in 1981 my husband took me on a getaway vacation on a budget, we were starving students back then. We went camping on Washington Island, a place I never even knew existed. This was pretty rudimentary camping. We threw up a tent on a friend’s lot, five acres of nothing but trees. Two weeks in the woods with no running water. I don’t recall how we showered or where we went when it rained and it did rain. We tacked fly strips to the trees as there were an inexplicable quantity of flies. I later discovered the bug infested lot was 100 yards from the “Island Exchange,” the island’s dump.

We fell in love with this Island. After years of camping and renting cottages we ultimately bought property and finally in 2009 built our home on The Island, as it is known in our family and friends’ lexicon. That is a very short version of how I retired in order to live on Washington Island and to serve as the Managing Director of the Trueblood Performing Arts Center (TPAC).

One of my favorite TPAC patrons explained the Washington Island phenomena best: “There are two kinds of people who come to the Island. One kind gets off that boat, and can’t hardly wait for the next boat to get back on, in order to get back off this Island. The other are those who immediately start looking for a house to buy or land to build on, and never want to leave again.” Our family is of the latter ilk.

Our town has no stop light, no bus or train station, no nail salon, and no fast food chains. It does have a beautiful performing arts center that can hold almost half of the permanent adult population. It’s a theater that can showcase staging, lighting and sound for a dramatic play, as well as jazz, folk, stand-up comedy and, of course, our annual Music Festival. The festival is a series of concerts led by Artistic Director Samantha George, violinist and professor of music at Lawrence University.

The TPAC board of directors chose to donate the facility at no charge to the community for various events. In 2018 this includes this year’s high school awards ceremony, a memorial concert for a beloved member of our community (every seat was filled), and the annual Christmas show to name a few.

The Trueblood Performing Arts Center is “Where Creativity Flourishes,” creativity in every sense of the word. We can’t afford a landscaper, so we rely on volunteers to maintain our gardens. We post “TPAC Wake Up Our Garden Event Saturday June 2!” on our marquee, people show up. A bicyclist from Seattle showed up with a trowel and a pair of gardening gloves. I asked her, what made her decide to spend a Saturday of her vacation digging in the dirt with a bunch of people she didn’t even know? “I saw the sign” was all she said.

Our theater is the beneficiary of many volunteers and some incredibly generous philanthropists. A group known only as the anonymous donors, or ADs, has challenged us to double our ticket sales in 2018 as compared to 2016. If successful, these families will match the amount of the 2016-2018 increase as a donation to the TPAC.

The preservation of the TPAC is a benefit to our entire town. Another group of local donors, the Island Angels, leveled a challenge to virtually every other community association to “help us fill the seats!” Pick a show to partner with us, and again help us fill our seats. If this results in selling more than 100 seats, these Island Angels will donate $10 for every seat filled. Exceed 200 seats, and the donation increases to $15 for every seat over 100 sold. Our July 3 show, Salute the Troops, was written and directed by Donna Russell, music by Julian Hagen and our partner was the American Legion. More than 30 families dedicated their time to produce and deliver a sold-out show. Selling all of our 250 seats resulted in standing room only, the Island Angels helped the TPAC meet its revenue challenge and provided a hefty donation to the Washington Island American Legion. It takes a village, and a lot of creativity.

The Tannahill Weavers performed at my first concert as managing director. They were celebrating 50 years as a group, as well as their induction into the Celtic Music Hall of Fame. I couldn’t help but wonder, how did we get a group all the way from Scotland? It was early in our season and we had an incredible crowd due to the efforts of that show’s partner, the Washington Island Community Health Program. It had been raining for quite a few days, typical of spring on the Island. A young couple holding a newborn baby asked for the ticket price at the door. I gave them the ticket price and mentioned the baby was free. They gladly paid for two adult tickets. As the novice director I asked, “What brought you to tonight’s’ show?” They replied, “We are camping and just wanted to get out of the rain for a night.” I smiled broadly, knowing they would get much more than that.