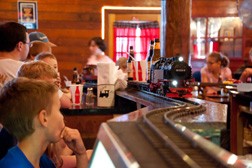 Children await the arrival of the PC Junction train. Photo by Dan Eggert.

Most visitors to Door County with children have their “P.C.” story. Whether they ate a burger delivered by train, hosed off Rosie the Pig Dog or cruised around the woods in a pedal-cart, the restaurant located at Peninsula Center has built a reputation founded on the tenets of community.

P.C. Junction started in 1998 as a fun, family restaurant where an elaborate toy train delivers food from the kitchen window to patrons seated around the bar.

The train and playground are what P.C. Junction was originally known for, but over the years, the restaurant has expanded by adding a patio, cabana bar, the Sugar Shack and a wooded play area.

Owner Bill Hanusa said the entire endeavor has always been about children, whether they were his own or not.

“As long as I could lead my kids in the right direction, why not lead everybody else’s as far as being ‘the kids place.’” he said. “That was always the intention.”

Alisa Richards of Eau Claire has visited Door County her whole life, but never eaten at P.C. Junction. Sitting around the train track with her husband and 15-month-old son, she said they certainly didn’t regret their decision to stop this year.

“Our little guy loves trains,” she said. “It’s a cool atmosphere – it’s not about the parents, it’s about the kids.”

As the train rolled by, Richards’ son never took his eyes from it, and smiled up at Richards as it left his field of vision. 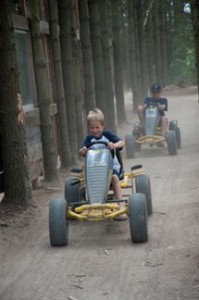 The place Hanusa envisioned for his own kids has reminders from his childhood, too. The “Washichek’s Store” sign on the west side of the building pays homage to the creamery and general store that occupied the main building when Joseph Washichek and his family owned the property into the late 1990s.

Hanusa remembers coming to the store as a youngster, which is why the property caught his eye as an adult looking to build a business.

“It’s sacred to me because all my life I walked up the steps,” he said. “Somehow I thought, hey translate that to Door County, as a place to come where you want a Door County feel.”

The Door County feel, to Hanusa, revolves around the county’s farming origins and values.

The pedal-cart track in the woods is gravel and dirt, which Hanusa said gives children and adults alike the chance to experience an old dirt road.

An old green truck sits on the lawn also, which Hanusa originally designed as a catering truck. Since then, it’s become a staple in the playground at P.C. Junction, with kids climbing in and out of the cage-like bed and sliding down the slide.

The pigs in Piggly Field also put the “farm” in Hanusa’s “farm values.” Originally, Hanusa tried to get his son and a few others to raise pigs for show at the Door County Fair. Between baseball, work and other activities though, only one pig ever saw the fairgrounds.

And then there’s Rosie: the 400-pound pig who acts like a dog.

The Hanusa’s purchased Rosie three years ago from Henschel Farms, and right away saw the dog in her. 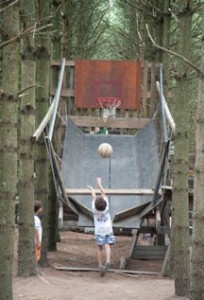 “Because we had more time then, we’d harness her and walk her on the trail,” Hanusa said.

She answers when called, and lumbered out of her wooden shelter at Hanusa’s coaxing. “Rosie, come on Rosie,” he said. “Come on, Rosie Dog.”

Rosie’s celebrity status stems from an experimental appearance at the Polar Bear Plunge a few years ago. While she didn’t go into the water, she did go onto the ice. Since then, she’s walked in the St. Patrick’s Day Parade in Sturgeon Bay and the Fourth of July Parades in Baileys Harbor and Egg Harbor.

Hanusa said last winter he and Denise couldn’t find anyone to watch Rosie before they left on a six-week vacation.

Local farmers declined the request, except Keith Birnschein, owner of Door County Custom Meats. Hanusa said he didn’t know what to expect when they returned from Florida, but as it turns out, Rosie got along well with Birnschein’s livestock.

“Not even the butcher wanted to take out the Pig Dog because he had made a friend,” Hanusa said.

In addition to Rosie, two small Hampshire pigs reside in a sand covered area in the woods. When people approach, they walk up onto a wooden platform grunting and snorting for attention.

The hogs also serve as recyclers of sorts, eating leftovers the restaurant can no longer use.

“They’ll certainly eat meat first – chicken skin is their favorite – then the fries and vegetables always tend to be the last,” Hanusa said.

At the entrance to the woods sits an after-hours restaurant known as the Pizza Czar’s Sugar Shack. Located in a barn, the Sugar Shack is open Wednesday through Sunday until 11 pm. 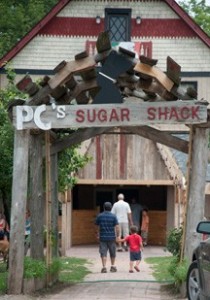 While they have a full liquor license, Hanusa said he never envisioned the Sugar Shack as a bar that would stay open until 2 am.

The Sugar Shack is covered with hand-painted chunks of wood from customers who’ve left their mark over the years. Most say the person’s or family’s name, with a date, but others are random sayings and phrases.

“Look at this one: ‘Chief Oshkosh loves P.C.’” Hanusa said as he pointed to one of the boards referencing the famed Menominee Indian Chief who lived in Egg Harbor and died almost 40 years ago.

Whether it’s the staff, who the Hanusa’s treat like family, the environment they’ve created, or the food they serve, people come back year after year to take in the experience.

Hanusa’s philosophy on tourists and why they come back to Door County goes back to values.

“Why does a person come back to Door County time and time again?…Maybe it’s just the community,” he said. “Maybe that’s truly why people will come back.”