As I grow older and remain here on the Door Peninsula, one of the unpleasant realities I must face is the loss of friends and valued community members. Since the last issue of the Peninsula Pulse, our county has suffered three irreplaceable losses – none quite so significant to me, personally, as Norbert Blei. 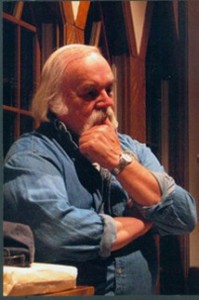 Norb was a man full of contradictions and moods. He built and burned bridges with a rapidity that could be staggering. But Norb was, first and always, a writer.

My first meeting with him occurred in 1978. My parents had just opened Passtimes Books in the tiny cabin in front of the Toppelmans’ art gallery in Ephraim. Norb had just released a book of short stories titled The Hour of Sunshine Now – before the Door County books and Chicago books garnered him a measure of fame – and my father was hosting an autographing party on the patio in front of the store. Norb and I talked for a time, between customers, about books and writing, the first of what would become many such conversations over the years.

One year later, my college graduation present from my parents was a weeklong class with Norb at The Clearing, titled Zen and the Art of Writing. On Thursday morning of that week, Norb had us load into vans and took the entire class over to Toft Point for a few hours. The afternoon before we had been discussing Japanese Sumi paintings that consist of a single brushstroke across a white canvas and on that morning at Toft Point I chanced upon a dark grey rock with a single orange-red line running its length. When the opportunity afforded, I took the rock over to Norb and commented, simply, “Nature’s Sumi.” He took the rock from me, ran his fingers over the surface, then looked up and said, “If it were in my power, I would bestow a Ph.D. on you right now.” The rock from that day – “my Ph.D.” – sits on a shelf not far from where I write this column.

As the years passed, Norb and I, like many who knew him for an extended period I suspect, had our ups and downs. I was never a fan of his column in the Door Reminder, a viewpoint I shared with him on more than one occasion. Likewise, he was less than thrilled when I replaced him as the Door Reminder’s columnist. Still our love of the written word, and particularly the printed word, gave us ample material for long and engaging conversations.

Back in 2011 I was asked to write an appreciation of Norb for the Go! Guide. It was a task I struggled with, just as I have struggled to write these words. But some of what I wrote back then (with a slight update for time) seems appropriate now:

In the 44 years Norbert Blei has called Door County his home, he has been its faithful chronicler, its conscience, its critic, and its celebrator. In his attempts to capture the essence of the peninsula he has been a short story writer, a novelist, a poet, and painter, and – perhaps most importantly – a teacher.

He has been himself, he has been Coyote, he has been Salvador Prague, and many others. He has garnered a loyal following of admirers, and irritated others to the point of anger – but he has never been ignored or overlooked…

Like few writers of any time or any place, Blei has served a single muse: Door County. The land, the water and the people of this peninsula speak to him and he, in turn, has tried to faithfully record what he hears, what he feels and what he sees. His record of this place, in whatever form he captures it, has been shared with the multitude of us who have cared to listen as we, in turn, try to understand our abiding attraction to this tiny sliver of land – an attraction Blei defined in his book, Meditations on a Small Lake, in this way:

I guess what continues to fascinate me about this place – and I’m now speaking as a writer who lives here – is that after many books and all the years of living in it, I’m still not able to really define the place. Water defines some of it, but not all. The light here is different because of the water that surrounds everything, but that’s not all of it either.

There’s a spiritual aspect to the landscape. When you try to write what Door County is about, it’s about something as elusive as that: spirit.

That is the mystery that is all compelling.

With the due respect Door County’s community of visual artists deserve, and acknowledgement of the cliché involving pictures and words, no one artist has ever come closer to capturing the essence of Door County than Norbert Blei.

On a whim just now, I pulled my copy of The Hour of Sunshine Now off the shelf and read the inscription Norb wrote that day on the bookstore patio when he was a young 42 years of age and I was all of 20 years. And I was struck by how I, after all these words to memorialize the man, have been outdone by Norb’s three short sentences:

“To Stephen, I wish the hours of sunshine, the writer’s life for you. Tell it all, experience everything. It’s all worth it.”