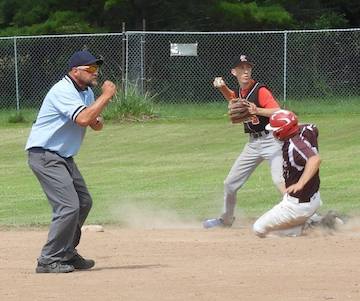 If you’ve attended a sporting event in your lifetime, chances are you’ve heard comments like these directed at those officiating the contest. The hecklers act like the umpire woke up that morning with the sole purpose of making bad calls against the hecklers’ team.

Recently, it’s gotten so bad that some officials have become targets of assaults, both after and sometimes during the games. Obviously, this makes the task of finding people to officiate these contests increasingly difficult.

Competitive juices flow in all of us at different levels, but I made it a point in my career to get my point across without crossing that fine line – most of the time. It would be hypocritical for me to pen an article about the abuse of umpires if I didn’t mention that during my 30 seasons of playing Door County League baseball, I was twice politely asked to exit a game before its conclusion. Once, I was protecting my pitcher, but that’s not the point.

Competition can bring out the sassy side in a lot of us, and I would argue that in the heat of the game, it’s not always a bad thing to express yourself or show some passion. However, when the contest is done, the competitiveness and disagreements should also end.

We’re seeing more and more super teams at young ages and the desire to teach kids that they’re pro material. Often, this leads to these blowups at games. What we’re really teaching these kids with this behavior is how to feel entitled and to expect to be treated differently by officials – and, by extension, by life.

Mike Lumaye began umpiring back in the early ’90s, working many fast-pitch games before taking on the Door County League in 2010. I asked him why he umpired games.

“I really like the sport and didn’t get the chance to play it a lot as I got older,” he said. “I used to watch the County League on Sundays for years and enjoyed it.”

After a while he started working the games behind the plate, and although he was nervous at first, over time he has become comfortable and stays consistent by keeping up with the rule book. Lumaye said he sees all types in umpiring, from those who try to keep the contest fair and do their best, to those with bigger-than-life egos who tend to be more of a spectacle than an umpire.

One thing he and I agree on is that it’s getting tougher and tougher to find officials.

“You are going to have a hard time in the future as umpires just don’t want to constantly be yelled at or told how to do their jobs,” Lumaye said. “Players, I think, understand how hard it is more so than coaches and the fans.”

I love to rib him when I get the chance, but he knows that I do it in the spirit of fun and that I also will never be caught doing the job. I have much respect for those who continue to do a thankless job, especially in the current climate.

As the regular season comes to an end this week, catch a game to see one of the men in blue – or sometimes black – keep the peace.

The Sister Bay team is once again on top as the league’s champion, and the playoffs consist of Washington Island and Kolberg, with Egg Harbor and Institute going into the final week, both with a chance of the fourth and final spot.