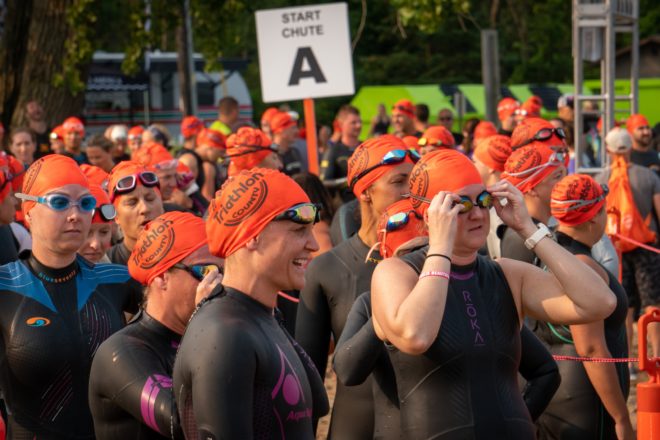 It’s race week again in Door County. This time, approximately 1,800 participants will compete in the Door County Triathlon July 16-17. Attracting a mix of seasoned and newbie triathletes, the event is actually three separate events: a sprint triathlon (or sprint relay) and kids’ triathlon on Saturday, and a Half Iron Man (or Half Iron Man relay) on Sunday.

“This year we’ve reached capacity for the sprint and maxed out at 1,000 participants,” said race director Sean Ryan.

Organizers also saw a record number of registrants for the kids’ triathlon.

Although a little less than half of the total available entries are still available for the Half Iron Man event, those numbers align with the current trend in ultra-endurance racing, according to Ryan.

“We’re seeing in the industry as a whole that more intense endurance events are coming back slowly,” he said. “People are flocking to shorter distances.”

Many athletes – especially those approaching their first triathlon – find that the training required for the sprint distance fits better into their schedules. And for those who are more accustomed to the biking and running portions of the event, the swim – at a quarter mile – can feel less intimidating than the 1.2-mile swim in the Half Iron Man event.

“A lot of people limit their training to the pool,” Ryan said, “and then when they get into the environment of open water with other people around them, it’s unsettling.”

Although it’s not a replacement for incorporating open-water swimming into a triathlete’s training schedule, Door County Triathlon organizers place the buoy that marks the race’s swim route in the water by mid-June. That way, local participants can train on the actual course, and out-of-town participants have the opportunity to do a practice swim or two if they arrive a few days before the race.

“If you swim from the beach to the buoy to the boat launch, that is the quarter-mile swim,” Ryan said.

His other tip for calming any pre-swim nerves? Wear a wetsuit. Race organizers make it easy for participants who are new to triathlons, or who are not ready to make the financial investment in purchasing their own wetsuit, by partnering with wetsuitrental.com. The online outfitter offers a $70 base rental fee and 12 brand-name wetsuits in a variety of sizes.

Not only does wearing a wetsuit add additional warmth (average water temperatures hover in the 50s this time of year), but it also “provides buoyancy, and that can give the participant more self-confidence,” Ryan said.
To boost self-confidence in the two other legs of the race, participants can access the running- and biking-route details ahead of time at doorcountytriathlon.com.

If spectating is more your speed – or you just want a close-up view of a triathlon in action – consider signing up for one of the handful of volunteer positions that race organizers are still looking to fill. Find information about participating – as a volunteer or triathlete – at doorcountytriathlon.com.