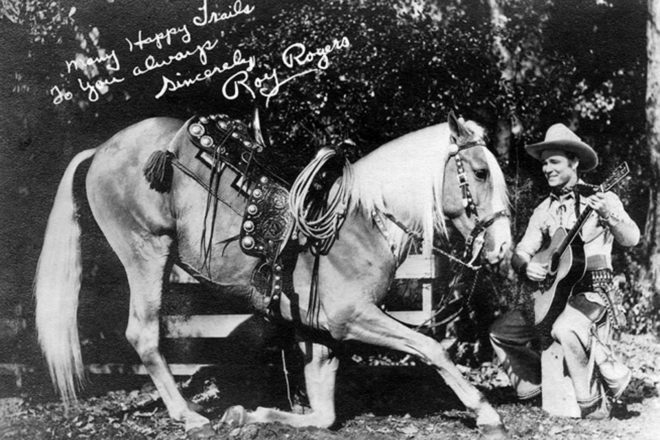 Leonard Slye was only 19 years old, and a high school dropout, when the Great Depression hit in 1929. Among various odd jobs, he tried to make a few bucks as a “singing cowboy.” After some not-so-successful attempts, in 1933, Slye – along with Tim Spencer and Bob Nolan – formed what they called The Pioneer Trio.

That following year, still in the grips of the Depression, fiddler Hugh Far joined them, added a bass voice and subtracted the word “trio.” A radio announcer thought they were too young to be The Pioneers, so he referred to them as The Sons of the Pioneers, and the name stuck.

A promoter wanted Slye to have a different stage name. He suggested the surname Rogers, after the popular entertainer Will Rogers. Slye used the first name Roy and went on to become the larger-than-life Roy Rogers: the King of the Cowboys and a star of radio, TV and more than a hundred movies.

Songs such as “Tumbling Tumbleweeds” and “Cool Water,” both written by Nolan, helped to boost The Sons of the Pioneers onto the national stage. Western songs are about American topics such as independence, freedom, “elbow room” and natural beauty, and they remind us that “a new world’s born at dawn.”

During the mid-80s, a couple friends and I – all longtime fans of The Sons of the Pioneers – formed our own cowboy trio, The Bunkhouse Buckeroos. We performed several of The Sons’ old songs while doing shows around central Illinois for nearly two decades. Audience feedback convinced me that this fundamentally American music remains an important part of our culture, but more than that, it reveals a deep and atavistic connection with nature. All of nature still “sings a song along the Timber Trail.”

From behind my guitar, I noticed there’s a little bit of cowboy in a lot of us. It’s amazing how many people still know the words to songs made famous by Roy Rogers. I know because audiences often sang along with us.

Being a cowboy originally meant tending cattle, often on horseback, but it has gone through quite an evolution. Now it can be a noun or a verb, but it represents American ideals.

My Dad grew up in the country, surrounded by farm fields, orchards, mountains, arid plains and the nearby Columbia River. His stories were about what some might call “cowboying”: exploring the Saddle Mountains, hanging out with First Nation people and riding horses … until World War II broke out. He joined the Army Air Corps, and after the war, Dad married Mom and followed her back to Green Bay.

During the 1950s and ’60s, we occasionally traveled to visit relatives from Dad’s home state of Washington and down through California. Driving in mountains and deserts, our car radio often played static, so Dad would sing cowboy songs. Camping along the way not only provided cheap or free accommodations, but it added to the adventure. National parks such as Badlands in South Dakota, Yellowstone in Wyoming and Grand Canyon in Arizona provided a clear image of America the Beautiful.

In 1955, Dad bought a black-and-white TV, and we got to see Howdy Doody and Winky Dink, but a favorite was the Roy Rogers Show.

The old Bay Theater in downtown Green Bay was special. Cowboys galloped across the West on that huge silver screen. On Saturday afternoons, there were affordable cowboy movie matinees, so my brother and I could go to the double feature to watch Roy Rogers and Gene Autry. Not only did they ride horses through beautiful country and dispatch bad guys, but they also sang some of the same songs Dad did. For us would-be cowboys, those western songs provided a tantalizing tug on the heart strings.

James Arness (Gunsmoke’s Marshal Matt Dillon) came to Green Bay for the 1957 dedication of New City Stadium (now Lambeau Field). Our parents took us to see him in person. I still remember standing next to this “larger than life” hero. His Stetson sat clear up on top of his six-foot-seven-inch frame. To this day, I can remember looking up at that impressive and imposing cowboy with the gentle and kindly demeanor.

Having grown up with horses, Dad decided we needed one, so when I was about 14, he got us a two-year-old blue roan gelding. Because we lived in town, he boarded it at the fairgrounds. He figured part of our education ought to be equestrian, including mucking out stalls, feeding, hoof care, currying, saddling, riding in all seasons, falling off, getting back on and healing from various injuries. It was all part of the deal.

Sandra Day O’Connor, our first female U.S. Supreme Court justice, grew up on a ranch in Arizona. She agreed with Dad, pointing out, “No other relationship between humans and animals is as close as when one is riding a horse.”

Dad had given us a very special gift indeed: one that helped to forge a visceral connection to, and appreciation for, our nation’s past.

There are some today who are leading us down a very wrong and dangerous road, putting the U.S. in conflict with science and education.  “Home on the Range” should be required listening for all politicians – particularly those who’ve been busy reducing public land budgets and acreage, even as demand for elbow room increases; or reducing air-pollution regulations “where the skies are not cloudy all day”; or diminishing pollution standards for our “cool, clear water.”

Life is a journey. Let’s be thankful for those visionary people who protected our spectacular public lands. Now it’s up to us to provide opportunities for kids and their families to enjoy the journey, to explore and discover, and to learn. This means more public lands, more trails, more rangers and interpretive naturalists.

Roy Rogers put it well: “If I could teach the kids to identify and appreciate their natural environment, then they will have a sense of place.”

Step away from electronic devices, away from the World Wide Web, and reconnect with the web of life. A new day is dawning.

Dale Goodner grew up in Green Bay and was a naturalist at the Green Bay Wildlife Sanctuary before moving to Peoria, Illinois, in 1976. There he served as chief naturalist at the Peoria Park District’s Forest Park Nature Center, then became supervisor of environmental and interpretive services. After three and a half decades, he retired. He and his wife, Mary, now live in Algoma.