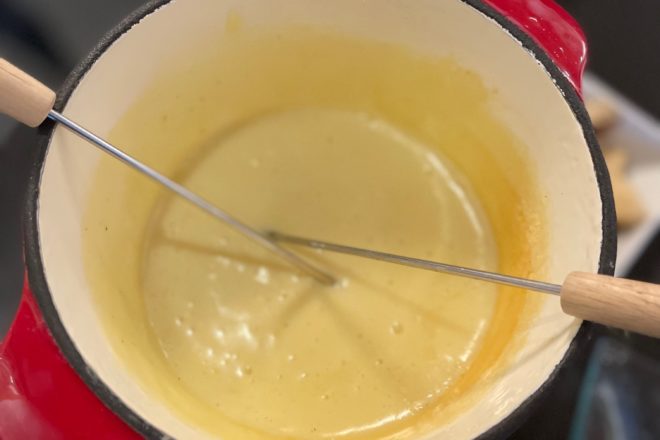 Stressful times call for comfort, well-being and (safe) community. Nothing achieves all three like cozying up to a hot pot of melted cheese.

Fondue feels retro, its simplicity trendy: throw cheese and wine into a pot, stick it over some Sterno and prepare any of your favorite dipping foods.

The alpine treat is a native of Switzerland, where it’s said that fondue, from the French “fondre,” meaning “to melt,” began in the 18th century as a means for farm families to stretch their winter food supplies. Apparently, cheese companies then marketed the delicacy to sell more cheese. It worked. Fondue peaked in popularity during the 1970s.

But then it seemed to fade away. Maybe the idea is better than the reality once everyone picks up a fondue fork for a meal of double-dipping. Maybe there are more than a few people who have been mouth-burned by Gruyère one time too many.

I think fondue never really went out of style, the way all timeless things never do. That’s because it’s cozy and accessible, and it holds memories. Even if you’ve held or attended only one fondue party in your life, it’s a hardwired memory.

Mine is bonded with my sister’s move to Alaska. She bought a mountaintop cabin on 20 acres with no electricity or running water, and only a wood stove for heat. I visited during her first Christmas, when there was five feet of snow outside and a moose interrupted my first morning trip to the outhouse. We played endless games of Jenga around bottomless pots of fondue that became a necessary staple because it was so easy and didn’t require the cooking space she didn’t have.

Whatever the reason for fondue’s return, embrace it wherever you see it. Haul the pot out of basement storage, or head to a local place that’s serving the cheesy pleasure. It’s the perfect time to make some fondue memories.