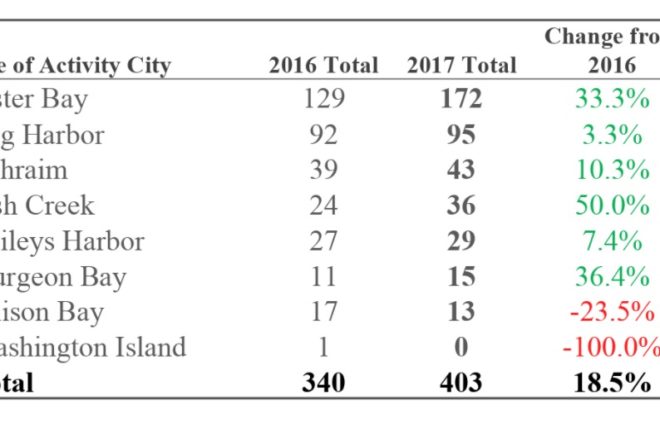 This chart shows the total number of J-1 Visa students in each Door County community in 2016 and 2017 based on their place of work.

The J-1 Summer Work and Travel (SWT) visa program is growing in Door County, according to data provided by the U.S. Department of State to employers. About 15 employers showed up at the forum in Baileys Harbor, hosted by the Door County Visitor Bureau (DCVB), including four employers who have never used the program before.

“When this program works it works for both sides,” said Mike James, acting branch chief for the SWT program with the Department of State. “[Students] are able to cover the summer months even if [employers] have American students that have to go back to school.”

Meanwhile, students learn what it’s like to be independent and live in the United States. The Department of State views the program as a diplomatic tool. Students who have a good experience during the summer will have a more favorable view of the United States as they grow up in their home countries.

“It’s in our interest when students come to this program, that they have a good time,” James said.

The majority of students come from Romania (96 students), Bulgaria (50) and Turkey (46). The top 12 most popular countries for the program make up 83.1 percent of the students in Door County.

Stacie Tollaksen, chair of the Wisconsin Dells J-1 Consortium, said the number of J-1 students nationally has not increased, staying around 100,000, meaning Door County is growing its share of J-1 students in the country.

Some employers at the forum cited one of the biggest challenges in managing J-1 students is those who seek second jobs while they work here.

Employers are saddled with a lot of bureaucracy in securing their students for the summer. They must coordinate with domestic and international state departments through sponsor organizations, drive students to Green Bay to pick up Social Security cards and provide proof of adequate housing.

“It’s very frustrating for us that have spent all winter getting visas, providing housing and meals, and then they just go ahead and get a second job,” said Jewel Ouradnik, owner of Rowleys Bay Resort, who has used the program to hire up to 25 visa students.

J-1 students are not legally bound to work for the employer that hired them first, but James said the state department wants students to stick it out with that first employer.

“Our stance is that they sign the job agreement, signaling their intention to work there,” James said. “It’s important that they go to that job and give that job a good faith effort before they decide to take off.”

“If someone does take a second job, we always tell the student their primary responsibility is to their first employer,” said Becky Davis, Wisconsin coordinator for InterExchange, a sponsor organization that works between employers and the state department. “If you want a second job, that second employer should be working around that host employer.”

In post-summer interviews, the state department determined that 40 percent of J-1 visa students had taken a second job without reporting it to their sponsor.