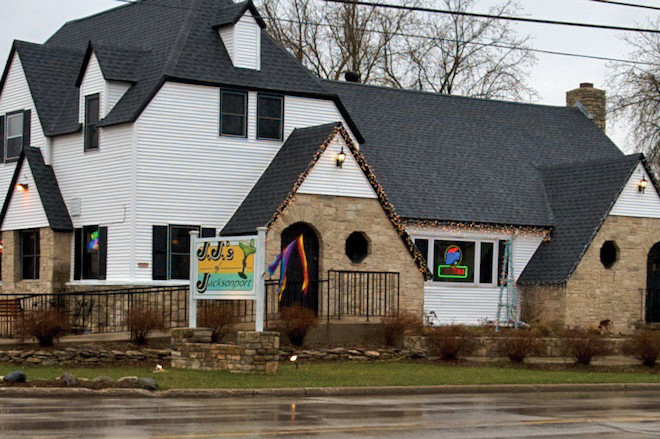 JJ’s of Jacksonport is one of a handful of year ’round businesses in Jacksonport. Photo by Paula Hedeen.

The question of sidewalks has been looming in Jacksonport since the newly formed town Plan Commission first brought up the subject earlier this year. The idea gained traction after a business forum for Jacksonport businesses was held on Dec. 1 and the consensus was that installing sidewalks to connect businesses should be the main concern for improving the town’s stagnant business climate.

“We want to hear from the businesses rather than what the Plan Commission thinks,” said Plan Commission Chair Bob Kufrin. “It’s more what you as business owners are thinking about.”

Jacksonport resident J.R. Jarosh started off the sidewalk talk when he brought about the importance of a connecting pathway between businesses – be it footpath or sidewalk. “That would make it seem more like a community rather than a few random stores on the way north,” he said.

Sue Jarosh, former owner of Jacksonport Craft Cottage, said she and her husband Joe put in their own sidewalk so people wouldn’t have to get out of their cars and walk on grass to get to the store. She said people would walk to the end of their sidewalk and wouldn’t want to go beyond that into other areas of Jacksonport because the option is either walk on other people’s property or walk on busy Hwy. 57.

“Sidewalks are imperative,” she said. “People walking with children are afraid to go out into the street. I think if we have them here, people would really see what a difference that would make.”

Bob Geitner, owner of Mr. G’s, agreed. “We have to reinvest in the main street of our town,” he said. “If we want this town to move on, we’ve got to make an investment.”

Kufrin asked if sidewalks would help Geitner’s business, which is about a mile and a half south of the town’s core area.

“It’s not going to help me, per se,” Geitner said, but added that sidewalks would give identity to a place that he said many people ask, “Where the hell is Jacksonport?”

Several others pointed out that in addition to connecting businesses, sidewalks would make the town safer so people wouldn’t have to walk on the highway.

Tom Lutsey of Waseda Farms suggested Jacksonport take a look at what the village of Egg Harbor has done with sidewalks and pavers and benches and bike racks. “This time of year it’s all couples, walking and holding hands down the street,” he said.

Ron Schultz of La Mere Antiques House said there are two main problems that are probably related – people speed through town because Jacksonport doesn’t have an identity.

“We need to stop the damn speeding through town,” he said.

Schultz told of two “foreign” people stopping their car as he was outside gardening. They asked, “Where is the center of town?” When he told them they were in it, “They left. It happens over and over again.”

Schultz and several others mentioned that a town priority should be replacing the pit toilets in the park with more modern conveniences. “I’m sick of people walking down and using my toilet,” he said.

“City people do not want to use pit toilets,” added Sue Jarosh.

Linda Pascascio of Plum Loco Animal Farm suggested the town enhance its identity through branding. While the town has festivals such as Maifest and Cherryfest, those names are sort of generic and do not connect people’s minds to the town.

“Maybe have something Jacksonport-based, branding it from a marketing perspective,” she said.

She also suggested an iconic cohesive logo be designed and added to banners hanging from lampposts or utility poles to let people know they are in Jacksonport.

Kufrin pointed out that several years ago the Jacksonport Women’s Club bought banners to be flown from Wisconsin Public Service utility poles in the downtown area, but WPS dictated the size (15”x30”), and they just were not large enough.

Kufrin also mentioned that one of the things the town’s Park Committee is exploring is businesses that would be compatible with the town’s park expansion plans, such as bike or kayak rentals.

“Businesses that become a destination,” he said.

Sue Jarosh said people would come into her shop regularly and ask where they could rent bicycles.

“If I had another lifetime, that’s probably what I would try,” she said. “And also kayaks. That would be a very good deal here.”

When the group was asked what businesses are missing in Jacksonport, J.R. Jarosh said an ice cream shop and a place to grab a cup of coffee with friends and neighbors would be welcome.

The ice cream shop “would bring a real sense of community, kind of how people flock to Wilson’s in Ephraim or the Yum Yum Tree in Baileys Harbor,” he said. “Creating an environment where people want to be and walk….all those things help create foot traffic. That’s kind of how a community starts. There’s a crossroads, and then there’s a reason to stop.”

He added that the forum was a great step in the right direction.

“This is the first time in 30 years there’s been a real constructive dialogue instead of naysayers.”

Kufrin said the Plan Commission will discuss all the ideas that came up at the business forum at its next meeting in order to make recommendations to the town board. That next meeting is 8:30 am on Monday, Dec. 14.