Jacksonport officials learned that construction of a safe harbor and boat launch at Schauer Park would likely require property acquisition at a meeting June 3. 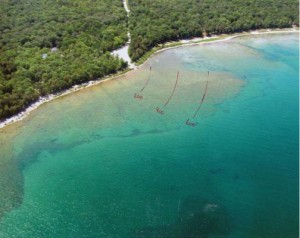 The Door County Parks Department would like to see a boat launch and Breakwall at Jacksonport’s Schauer Park.

Results of a feasibility study by AECOM engineering firm, which placed a preliminary price tag of $2.27 million on the project, were discussed. The proposal does not include a marina, Pinney stressed, only a breakwall and launch facilities.

“We don’t do marinas,” Pinney said.

If the project moves forward, Pinney said it would almost certainly require the purchase of additional land for parking, land that might include that owned by Mae Muehl directly north of the park.

Muehl has owned the property for 33 years, she said, and was shocked to hear that it was being considered for the project. She said she was designing a retirement home for the parcel and would refuse to sell.

Pinney said the Schauer Park location was chosen because the Lake Michigan side of the peninsula lacks safe harbors. He sited a report by the Department of Natural Resources from the early 1990s stating a preference for a safe harbor every 10 miles. Travel by boat from Baileys Harbor to Sturgeon Bay is roughly 22 miles.

“Yes, absolutely,” Pinney responded when asked if there is a need for a safe harbor. “This is a top priority area for the state of Wisconsin.”

Lakeside Park in Jacksonport was considered for the project; however, it was deemed unsuitable because of the sandy lakebed there, which would require frequent dredging.

Schauer Park appears to be a good location because it has an already existing boat launch and is all bedrock.

Schauer Park is also close to a popular fishing spot and a new boat launch would make it more accessible to the public than launches in Baileys Harbor or Sturgeon Bay.

“The primary purpose of this study is evaluating this site as a public boat launch and safe harbor,” AECOM project engineer Pete Diemer said.

The study mapped out many concepts, but engineers recommended Concept E, including “two launch lanes, a protected harbor… maintained natural beach area in the harbor and a widened navigational channel entrance.”

Pinney said Concept E would require blasting a 700-foot channel that would be 100-feet wide and 7-feet deep, so small boats can reach deeper water.

Diemer said other studies would likely be required to move forward, including a sediment survey that would cost an additional $8,000. The AECOM feasibility study cost $48,300, a cost shared between the Town of Jacksonport, Town of Sevastopol, the county, and the Wisconsin Waterways Commission.

The launch and breakwall proposal, if approved, would be funded similarly to previous projects undertaken by the county, such as the launch at Olde Stone Quarry boat launch on the Green Bay side near Sturgeon Bay, completed in 2006.

“Almost all of the money comes from a users tax on boaters and fisherman,” Pinney said.

A decision is not imminent, Pinney said, and he anticipates “a long, slow process.”

“My guess is we are a couple of years away from a decision,” Pinney said.

Muehl is not the only person opposed to the project. The Southeast Jacksonport Neighborhood Association has said they are opposed to the site because of site limitations, environmental impact, and economic issues.

The site limitations include the property acquisition and an increase in traffic. Pinney said traffic would only increase by 30 – 40 vehicles on the busiest of days.

The association also pointed to adverse environmental and property impacts from blasting. Diemer, however, said engineers did a test blast in the area and found that there is low chance of damage being done to structures nearby. There are concerns that increased boat traffic could disturb the whitefish habitat and that boats leaving the lake and being launched in nearby Clark Lake could transport invasive species.

Karon Winzenz, Co-President of the Southeast Jacksonport Neighborhood Association, said the harbor would exacerbate the Claudophora problems on the shore as well.

“We have no idea of the unintended consequences,” Winzenz said. “We should error on the side of caution.”

“Be patient,” Pinney told project opponents. “We will do our best to address the needs and concerns of the people opposed…it is a long process.”