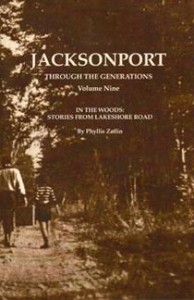 In the Woods: Stories from Lakeshore Road by Phyllis Zatlin is the latest book from the Jacksonport Historical Society. Released as volume nine in the series “Jacksonport Through the Generations,” the book traces the history of the .85-mile stretch of road along Lake Michigan from the ‘20s to the present.

Chapters take a look at those who have made Lakeshore Road their getaway, including a well-known violinist with the Chicago Symphony, an artist who has served as president of the Door County Art League, a U.S. District Court Judge whose son became governor of Wisconsin, distinguished professors at various universities, and successful entrepreneurs.

The volume features an index of proper names and numerous black and white photos. A grant from the John and Nell Herlache Family Fund has made possible the inclusion of two colored group photos of current residents and a foldout map.

The book is $20 and may be purchased at the Jacksonport Craft Cottage or Bley’s Grocery in Jacksonport. Books may also be purchased by emailing [email protected] or by sending $22.50 to Jacksonport Historical Society, 4768 Highway 57, Sturgeon Bay, WI 54235. For more information call 920.743.6415.