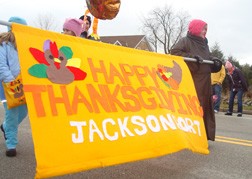 Entering its 15th year, the annual Jacksonport Thanksgiving Day Parade will take place Nov. 24. This fun-loving, eclectic parade, a labor of love put in to motion by local northern Door County residents, will build upon the theme of neighbors helping neighbors this year by supporting three individuals in the community: Bo Johnson, a 12-year old undergoing four rounds of chemotherapy for leukemia; Deloris “Tootie” Michelsen, who underwent heart valve replacement last November and is currently on dialysis; and Randy Pluff, who had surgery in June to remove a brain tumor and is waiting to begin a specialized “cyberknife radiation” treatment.

Past parades have raised money for “Feed My People,” breast cancer research, the Jacksonport Fire Department, a young mother with brain cancer, and more.

Parade viewers can expect the same blend of eclectic floats and characters mixed with a traditional color guard, a Jacksonport fire truck, some horses and maybe a camel. And of course, what parade is complete without Santa?

The parade will begin at the Jacksonport Fire Station, take a right on Highway 57 to Mike’s Port Pub where it will turn around and end at J.J.’s of Jacksonport. J.J.’s will be open during and after the parade.

Anyone wishing to participate in the parade should be at the Jacksonport Fire Station by 11:15 am.