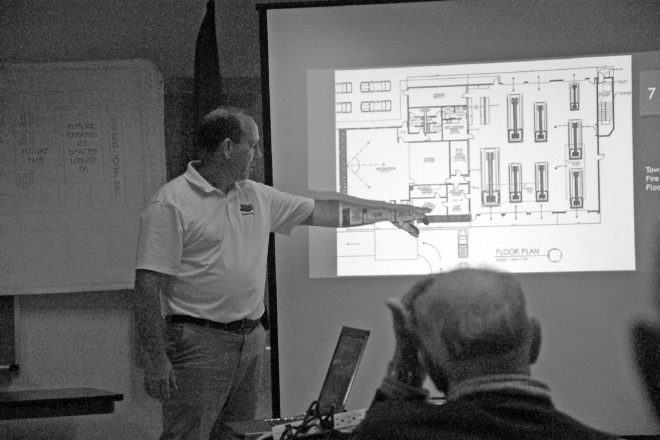 Tom Ash, Jacksonport’s fire chief and chair of the town’s Buildings & Grounds Committee, shows the floor plans for the proposed renovation and expansion of the town hall and fire station during a public presentation on Oct. 20. The committee will hold another public review of the plans at 10 am on Oct. 1. Photo by Jim Lundstrom.

The Town of Jacksonport’s Buildings and Grounds Committee held the first of two public forums on Sept. 20 to enlighten the community about a plan to renovate and expand its combined town hall and fire station.

Town officials and residents have bemoaned the fact that the town has long outgrown its bare bones pole barn town hall, where the town clerk operates in an office the size of a closet, while next door, firefighters negotiate cramped conditions more reminiscent of a submarine than a fire station.

Committee chair Tom Ash, who also serves as town fire chief, led the presentation for the 14 citizens in attendance, only seven of whom were not committee members or town officials.

Ash explained that the process for the committee really began last November at the town’s annual budget meeting when the electorate approved a tax levy increase of $100,000, and using $60,000 of that for three years to get the renovation project off the ground. With a very preliminary floor plan, the project at that time was expected to cost $680,000.

Since then, the committee – which includes a retired architect, an architectural engineer, a former engineer for the city of Milwaukee, and Ash himself with 25 years of experience in construction and civil engineering – began doing research on the project by looking at other community complexes and visiting Door County fire stations to learn what they did and what they would have done differently.

Their mission with all this research was to come up with a plan that fit the very different needs of the town and the fire department, and do it in a way the taxpayers of Jacksonport can support.

“This is plan No. 16,” Ash said as he began showing the architectural renderings by committee member and retired architect Tom Maher.

“What that tells you, as we were going though the process, we kept refining and vetting the plan so that we feel we are at a design right now that has a lot of more added flow and function than that original design,” Ash said.

Better yet, he added, this plan has 25 percent more space than the original plan and will likely cost less than the projected $680,000, although he said it would have to go out for bid to get exact costs.

Ash said the proposal before the public renovates the entire building, brings it up to modern standards, and makes it more functional.

Fire station renovations include drive-through bays so they won’t have to back trucks into their spots, another outside truck bay, an exercise room and a training tower where town firefighters can practice a variety of firefighting skills.

While they were at it, the committee also came up with a rough floor plan for a county EMS station that would nestle up against the fire station, in anticipation of the county’s plans to add a mid-Northern Door station. Egg Harbor has been suggested as another site, but Ash said this plan might be an added incentive to the county. He also said with County A right outside the door of the Jacksonport fire station, it makes sense that the county would choose Jacksonport. He noted for the audience that this is a low priority for the county right now and will probably not be acted upon until the new central station in Sturgeon Bay and southern Door stations are off their plates.