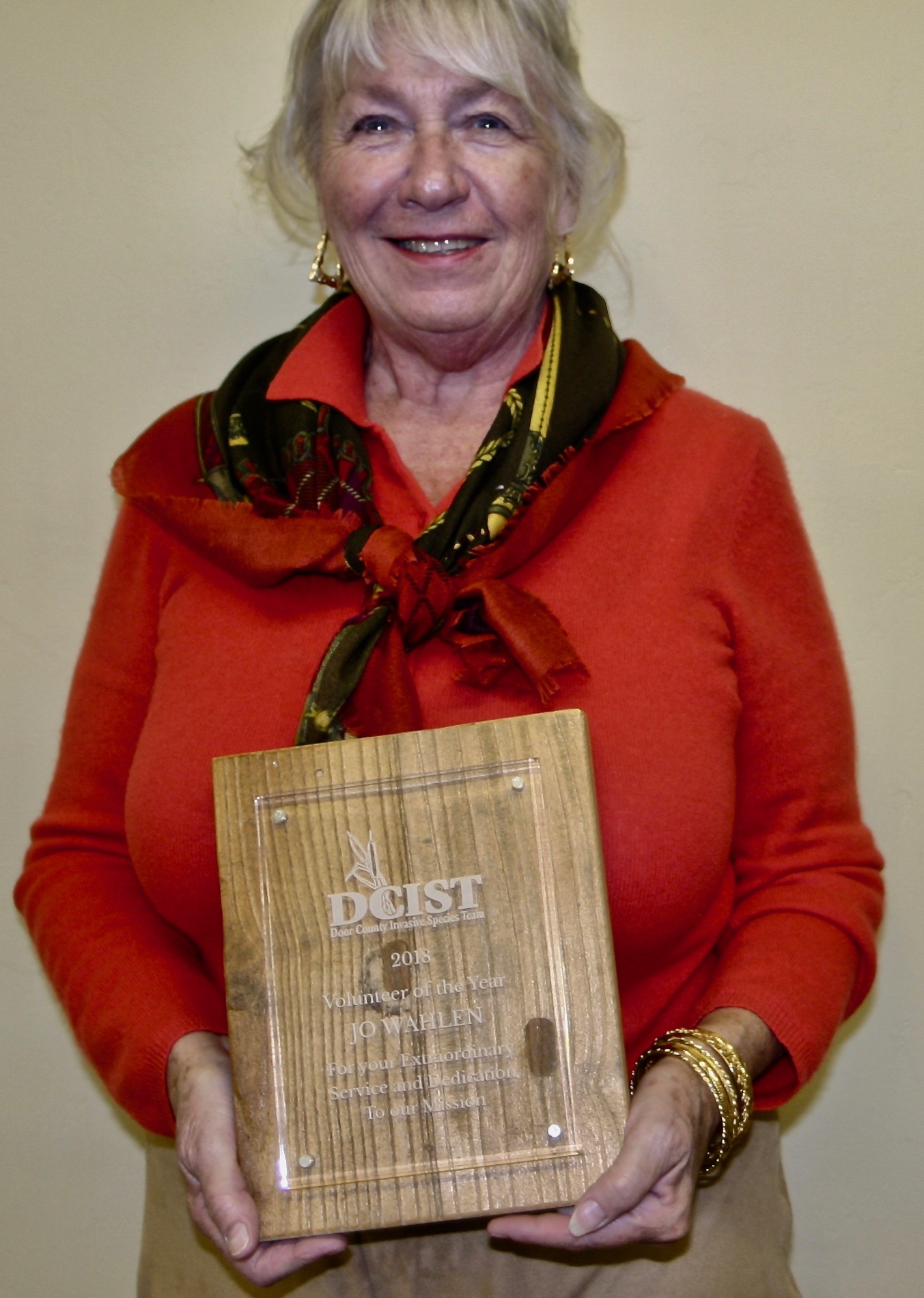 Jacksonport resident Jo Wahlen received the first Volunteer of the Year Award from the Door County Invasive Species Team at the Oct. 23 Jacksonport Town board meeting. Photo by Jim Lundstrom.

Jo Wahlen understands that the price of liberty from phragmites and other invasive species is constant vigilance.

For her vigilance and efforts to engage Door County communities in the fight to control invasive species, Wahlen was honored at the Oct. 23 Jacksonport Town Board meeting with the very first Volunteer of the Year Award from the Door County Invasive Species Team (DCIST).

The award was presented by DCIST Coordinator Kari Hagenow and Krista Lutzke, the conservationist at the Door County Soil and Water Dept. in charge of invasive species, cited Wahlen’s unwavering support for the DCIST mission to control invasive species in the county.

“This individual has made all of our current programs possible,” Lutzke said of Wahlen, adding that the Jacksonport invasive species ordinance that Wahlen championed has been adopted by other municipalities (only the towns of Egg Harbor and Gibraltar have failed to adopt a noxious weed ordinance). The ordinance is being considered for adoption by both Kewaunee and Brown counties.

“Everyone is modeling after this town’s efforts,” Lutzke said.

She added that without Wahlen’s commitment and generosity – almost 200 volunteer hours donated by her to the cause, “It would not be the model it is today.”

Hagenow recalled that she was first contacted by Wahlen in 2015. They walked the Jacksonport shoreline to see the phragmites infestation and Wahlen tumbled into the water, Hagenow said. But not even that dampened her spirit for the project.

Hagenow said the award should have been given to her several years ago already for all the work she has done to promote fighting invasive species not only in Jacksonport, but traveling to other municipal meetings to spread the word.

“She really cares for the natural beauty,” Hagenow said.

“Phragmites was so bad, you had to take notice,” Wahlen said. “It’s been a joy working on this.”

She said her principle in working with the DCIST group is simple:  “You tell me what you need. I’ll see what I can do about making it happen.”

Wahlen said she had immediate support from Town Board Chair Randy Halstead, who also represents the area on the Door County Board of Supervisors.

Jacksonport Town Board member Tom Wilson thanked Wahlen for her work and said to the DCIST presents, “You could have asked us. We could have told you what kind of force she is.”

Wahlen said one of the highlights for her is when she got a call from a DNR official who wanted to know more about the Jacksonport ordinance and Wahlen’s efforts in spreading the word about invasive species control.

“Each town needs someone to step up and be the watchdog. If everyone just does a little bit, it works beautifully,” she said. “I think we’re on the right path. We just have to make sure it keeps happening and remain ever vigilant.”