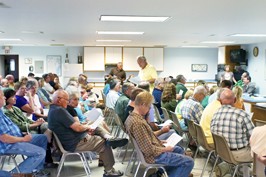 Over 100 residents showed up to a special town meeting in Jacksonport on Aug. 28 to vote on the purchase of a property. Photo by Len Villano.

The town hall was buzzing in Jacksonport on Aug. 28 as over 100 residents gathered for a special meeting to vote on whether or not the town should purchase 2.79 acres of property adjacent to the south side of Lakeside Park.

The vote came in at 90 for and 14 against, meaning the town will move ahead with the purchase.

Before the vote, residents and town board members discussed the pros and cons of purchasing the property. Jacksonport Town Board Chairman Al Birnschein began the discussion with an explanation of why he thought it was a good idea.

“This is something that’s very valuable to the town with all the sand beach and the nice, beautiful wooded area,” said Birnschein. “The board feels this is the opportunity of a lifetime right at our fingertips which would help improve the town of Jacksonport.”

Supervisor Tom Wilson broke down the monetary aspect of the purchase. The total purchase price of the property is $766,800, but the town’s purchase of the property is contingent on receiving a roughly $360,000 grant from the DNR next May. The grant application has to be in to the DNR’s office by December.

With additional miscellaneous costs added in, roughly $420,000 would need to be covered via a loan Jacksonport residents would likely pay back over the next 15 years. According to a chart provided at the meeting, property taxes would increase by roughly 13 cents per $1,000 of property to cover the loan payments.

That number, however, does not take into account any expansion of the tax base or other grants the town plans to apply for to help with the purchase cost.

A majority of residents who spoke before the vote were in favor of the acquisition, saying it was a once in a lifetime opportunity and wanting to keep the property from being developed.

“There are only a few things that you ever get a chance to do in government or as a citizen that really make you feel good,” said Mike Serpe, “and I think this is an opportunity for everybody in this room to say to themselves, their children and their grandchildren that I was there that night we decided to proceed on this.”

A few speakers did have concerns about the purchase. Ron Schulz wasn’t sure the town had thought through the logistics of what would be done with the land after it was purchased.

There is potential to use the septic system currently tied to the 3-bedroom house on the property as the starting point for new park restrooms, but the exact details of how that would be done or what it might cost haven’t been worked out yet.

“I’d like to have at least the general costs of some of those things before the town is going to commit to something like this,” said Schulz. “Once in a lifetime situation or not, it’s still money out of people’s pockets.”

Birnschein said he understood where Schulz was coming from, and Wilson said the septic should be adequate if they go ahead with the restrooms.

They also said the house on the property will probably be put on the market for a buyer to move, covering some of the purchase cost, and the remaining two outbuildings on the property could be used for park purposes. The town could also take advantage of the electricity and well already available on the property.

After the votes were counted and the purchase was approved, Birnschein said he felt good about the whole process.

“Now my work is going to start,” he said. “There’s a million things to do. We’re gonna get at it and get it through.”