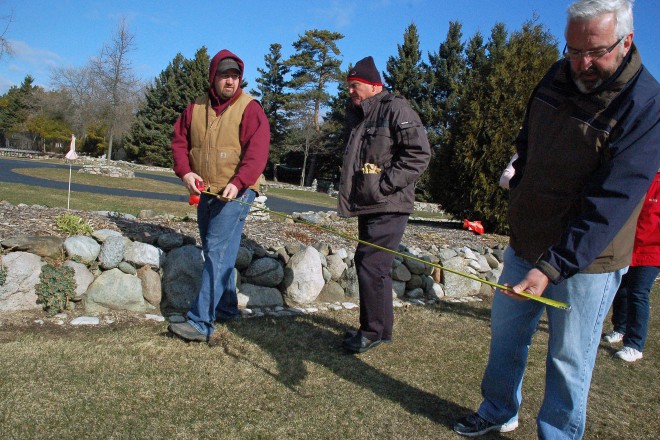 The Jacksonport Plan Commission concluded its April 11 meeting by taking a walk through the downtown corridor to look at where the planned walking paths will be placed.

The town board recently gave the Plan Commission approval to get estimates for the sidewalks, but before that, the commission members needed to know that the four-foot wide walks would work in the intended areas.

The plan is to add walking paths along Hwy. 57 from the County V intersection south to the Town Hall Bakery on the west side, and from the northern end of Onan Drive (directly across the street from Mike’s Port Pub) to the end of Lakeside Park on the east side.

Commission member Tim Bley suggested that instead of creating quarry wash gravel paths, the town should opt for recycled blacktop. While it costs more than quarry gravel, Bley said it “hardens like concrete.” 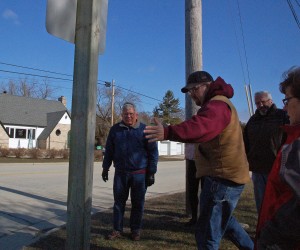 Jacksonport Plan Commission member Tim Bley does a quick arm measurement of the intersection when the Plan Commission used part of its April 11 meeting to walk the area of the walking paths the town plans to install for this season. Photo by Jim Lundstrom.

At the four-corner intersection, curbs will have to be redone at each corner to create pedestrian curb ramps, and the town will have to work with the state Department of Transportation to move some signage from where the paths will be, as well as the power company to re-route some power pole guy wires. Other than that, two pines on the park side might have to come down to accommodate the path.

As the group walked along the area where the paths will be, Bley brought out his tape measure to make sure at a couple of tight locations that there is enough space for the four-foot walks to be the state-mandated two feet from the curb.

Bley said he would seek several bids and come up with a final cost to provide to the town.

Commission chair Robert Kufrin said they hope to have the paths in place after Maifest.

“This is so exciting,” commission member Lisa Bieri said.