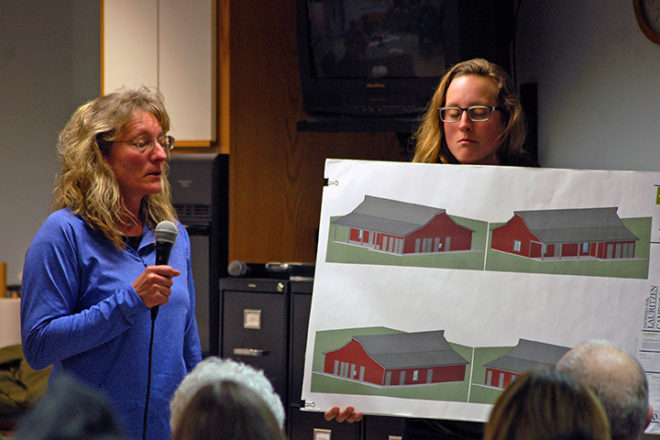 Cheri Lauritzen, left, explains landscaping for the proposed campground as her daughter, Brooke, holds a rendering of the campground’s check-in building. Photo by Jim Lundstrom.

After hearing arguments for and against a proposed RV campground at a March 5 public hearing, the Jacksonport Town Board reaffirmed its support for the conditional use permit that will allow the Lauritzen family to open a 130-site campground at Highway 57 and Bagnall Road.

The town board hearing was required before the issue goes to the Door County Board of Appeals. A date has not been set for that hearing.

Fifteen people spoke in opposition to the campground, raising issues that included property values, noise, smoke and wastewater pollution, the possibility of neighboring hayfires from campfires, traffic safety, water usage, septic capacity,  and a permanent damaging of the image that Jacksonport is “the quiet side” of the peninsula.

“The problem I have is the damage to the village and township in terms of its character,” said Jim Frings, who said his family in Jacksonport goes back to his great-great grandmother, who is buried in the cemetery at St. Michael’s Catholic Church. “The RV camp is similar to a junkyard or a forging plant in that it’s something that people don’t want in their backyard. I think our competitors in Fish Creek, Egg Harbor and Baileys Harbor would not approve this.”

Nine people spoke in support of the campground, invoking everything from support to the town board and Plan Commission, which had already unanimously approved the plan, to plain old good neighborliness.

Darrell Birnschein said he was disappointed by the opposition and surprised that Jacksonport residents are “not more welcoming and friendly.”

Birnschein said people should view the campsite as a “permanent green space” in their midst. “We could be looking at a lot less friendly places,” he said.

Two of those who spoke in favor of the campground reminded the audience that their now well-accepted businesses originally met opposition when first proposed. They included town Plan Commission member and business owner Little Bit LeClair, who recalled in the early 1980s there was great opposition to the proposal she and then-husband Joe LeClair had for the 17-room Square Rigger Lodge on the lake side of Highway 57.

“They all wrote in, showed up, hired attorneys,” she said, yet, she added, here she is today, and every one of those original objectors has since used the lodge.

Eric Peil of Peil Construction was the other business owner who recalled for the audience that when he appeared before the town board as a young entrepreneur with a business plan that included becoming the first private contractor to win a bid to plow the roads of Jacksonport, he was met with a lot of opposition.

“There were a lot of people who didn’t believe I could actually do it, and now, eight years later, we’re still doing it,” he said. “Over time we proved we could do it and a lot of those people who were against it softened up to it.” 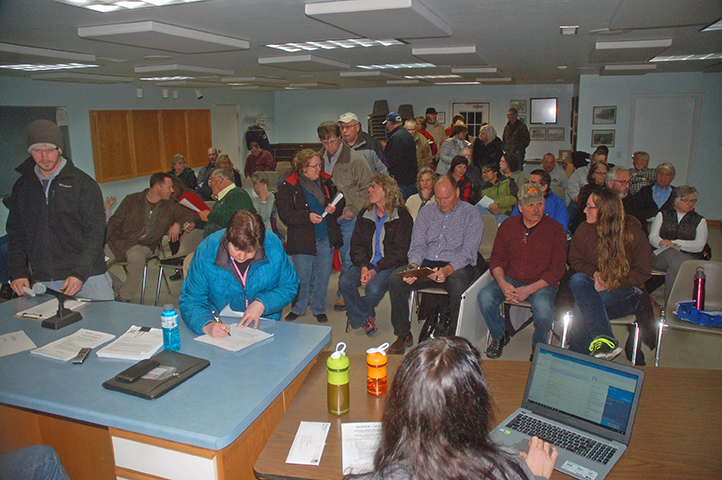 The Jacksonport Town Hall fills up as people enter and sign in for the public hearing regarding a proposed RV campground at Highway 57 and Bagnall Road. Photo by Jim Lundstrom.

Since then, Peil, a Baileys Harbor native, has moved his business to Jacksonport, where he is a neighbor of the proposed campground.

“We’re all here for the common good of Jacksonport,” Peil said. “You gave me a chance. These people have a great plan. Why not give them a chance? I think everybody deserves that.”

Lisa Bieri, who also serves on the town’s Plan Commission, said she supports the campground as a spur to economic development in the town, a sentiment reiterated by fellow Plan Commission member Al Birnschein.

“Let’s give these people a chance. Don’t knock these people down,” he said. “They’re going to do good for Jacksonport. Jacksonport needs this infrastructure right now. Right now in the summer you can roll a bowling ball down the street. This is going to be a prize to people all the way down to Valmy, even Institute, a moneymaker for all these people. Wake up. Smell the roses. Jacksonport is a pass-through town. Let’s move it forward.”

Steve Parent, with Baudhuin Surveying and Engineering of Sturgeon Bay, attempted to address many of the concerns raised about the campsite.

Regarding traffic safety, Parent said the state Department of Transportation has no records for any accidents at the intersection as far as their records go.

“In our engineering opinion, stopping distance is adequate in both directions,” he said, adding that if there is a problem, he put together a cost estimate of $25,000 for traffic control at the intersection.

Regarding fears that the campsite will use up the area’s water supply, Parent said the aquifer produces 400 gallons of water a minute, and that campsite will use a mere fraction of that amount. He added that the campground well will go down at least 210 feet, which should make it much deeper and drawing from a different aquifer than older, less deep wells in the area.

“I do think there will be little impact on property values,” Parent said.

When asked by someone in opposition to the campground if he would live across from it, Parent said, “I wouldn’t have a problem.”

Cheri Lauritzen and her daughter Brooke, who Cheri described as “hopefully future campground owners,” also took to the floor to defend the campground and respond to charges of the campground being an unsightly, noisy addition to the quiet side.

Someone in opposition had raised the issue of noisy generators being used by the campers.

“No generators will be allowed,” Cheri said, and Brooke added that four-wheelers will also not be allowed.

Regarding noisy campers, she said. “We will be patrolling. We don’t like camping next to people that are noisy. We’ll be there 24/7.”

She also dismissed the idea that campers will be trespassing on neighbors’ property.

Asked about the grocery store planned for the campgrounds, Cheri said is would consist of standard camping supplies.

“We won’t have meat,” she said. “We will not sell liquor. We can basically sell beer or wine. Maybe a little milk. Maybe not even dairy products.”

The campground will also have two sets of commercial laundry equipment that will be open 24/7 to campers and the public, Cheri said.