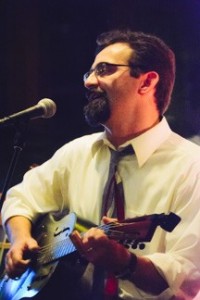 As a boy, Michael Lee Ammons wanted to play banjo like Pete Seeger. “My mom couldn’t find banjo lessons, so she forced me to take guitar lessons. I wasn’t happy about it,” Ammons laughs, “until something clicked.” Growing up he listened to classic rock and roll, played in a “terrible” high school garage band and was introduced to the blues by Steve Cohen, who taught Ammons the harmonica.

“I was listening to the Rolling Stones, which was blues influenced, and moved backwards,” recalls Ammons. “They were influenced by Muddy Waters, Robert Johnson, Son House.”

In high school, Ammons took a trip to eastern Tennessee to visit his great grandmother. “I found out that she used to play banjo, that all her siblings played instruments – at the turn of the century,” he recalls. “She was thrilled to play for me. And the family story is that the banjo she used to play was a gift from a hobo she gave a meal to. That’s as cool as it gets for someone into old music.”

During summers in college, Ammons stayed at his family’s cottage in Door County and worked at The White Gull Inn, playing at fish boils and collaborating with other local musicians, including Julian Hagen. He met his soon-to-be band mate Rich Higdon in the early ‘90s at an open mic at The Bayside Tavern in Fish Creek.

“I was playing congas at the time,” recalls Higdon. “We didn’t know how to play together, we tried anyway. He suggested I get a washboard.”

Higdon, a potter who played percussion in high school and college, bought a washboard for $7.90. “Learning the washboard was a long process, I didn’t really have any lessons or role models,” he explains. “I would play with Mike and it was about getting the right feeling, developing my own style, watching others playing, listening to old recordings.”

When Ammons married, he and his wife moved to Madison, where he found a thriving music scene. He performed with a band called Durable Goods, often on a street corner on the Capital Square during the weekly farmer’s market. Higdon would often commute from Door County and join in. 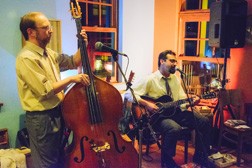 Rich Higdon (left) and Ammons recently performed at The Cookery in Fish Creek. Higdon plays bass as well as washboard and spoons for The Water Street Hot Shots. Photo by Len Villano.

“There was a certain spot they always played at,” recalls Higdon.

“I miss that. I had lots of great music experience there,” comments Ammons, who relocated to Sheboygan where he now lives with his wife and two children.

“It was a change of music scene,” notes Higdon, who was soon invited to play at a local tavern with Ammons in Sheboygan – The Water Street Pub.

“I didn’t expect it to go very well,” admits Ammons, who booked the Sunday night gigs at the pub. “People really hadn’t heard what I was playing – but they really enjoyed it.”

Soon other musicians started sitting in and overtime they called themselves The Water Street Hot Shots.

“JR [Fenner] was one of biggest fans,” recalls Ammons. “He asked, ‘What can I do to play with you guys?’ He rented a bass and I got him started – he’s become our bass player.”

“Steve toured nationally with punk bands,” says Higdon. “He enjoys this cause it’s so different, light and sparse playing. It frees me up to play more ukulele and washboard.”

“It’s great to have someone like Rich in the band,” says Ammons. “[The washboard] twists people’s ears, it’s a visual thing and kids come right up, they’re not afraid to check that out.”

On Oct. 12 at 7 pm, Michael Lee Ammons & The Water Street Hot Shots, winners of the Grafton Blues Challenge in 2008 and 2010, will perform at the historic Jacksonport Town Hall Bakery. “It’s such a neat space for acoustic music,” comments Ammons. “It was built for gatherings.” Expect some old time American tunes. “It’s good time music,” says Ammons.

The Jacksonport Tall Hall Bakery is located along Highway 57 in downtown Jacksonport. Tickets are $15 for general admission. Advance reservations are encouraged and can be made by calling 920.823.2116. The bakery also hosts gatherings of The Ukulele Society of Door County led by Rich Higdon, check out their Facebook page for more information.