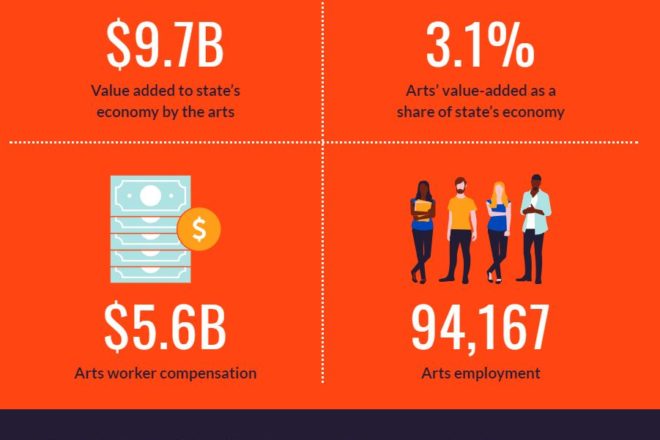 One of the six items that local representatives presented to elected officials during the 2019 Door-Kewaunee Legislative Days in Madison earlier this year was legislation promoting the “creative economy.”

What, you ask, is a creative economy?

According to an article in the Stanford Social Innovation Review, it’s the “socioeconomic potential of activities that trade with creativity, knowledge and information. At the heart of the creative economy are the industries that lie at the crossroads of arts, culture, business and technology – including advertising, architecture, arts and crafts, design, fashion, film, video, photography, music, performing arts, publishing, research & development, software, computer games, electronic publishing and TV/radio.”

The proposal the Door-Kewaunee lobbying team advocated included legislation sponsored by our own Rep. Joel Kitchens and Sen. Dan Feyen (R-Fond du Lac). The bill introduced would provide $500,000 to Arts Wisconsin during the next biennial budget to administer creative-economy grants to nonprofits, businesses, local governments and business-development associations. Each entity could apply for a maximum of $40,000 in funding, with the provision that a matching amount in nonstate funds be secured. It also asked that the Department of Public Instruction include the percentage of students participating in music, dance, drama and visual arts on the annual school and school district accountability report cards.

It seems like a no-brainer when the state has been fretting about the brain drain of young people, and it’s well documented that millennials and those following them want to live where arts and culture are respected, but, as Arts Wisconsin Executive Director Anne Katz told the Pulse, “There’s a lot of politics going on right now.”

The proposal had a public hearing with the Assembly Committee on Community Development, followed by passage of the bill by the committee, with two dissenting votes from the majority party.

It then went to be considered by the Senate’s Local Government, Small Business, Tourism and Workforce Development Committee, which our own freshman senator, André Jacque, chairs. Despite requests from the authors, Jacque has failed to hold a public hearing on the bill, effectively killing it in this session.

Asked why he did not support the bill co-authored by his district and party colleague, Jacque offered some fuzzy responses that included the potential for Democratic Gov. Tony Evers to pull some “shenanigans” with the legislation.

“It’s a significant chunk of change,” Jacque said. “Also, it would be subject to a partial veto. So whatever restrictions are put forth on any new programs, the governor has the ability to strip out all those provisions and still keep the funding.”

Perhaps it’s the nature of divided government – a Democratic administration and a Republican legislature – but basing one’s decision not to support a bill on the governor’s partial veto power seems like an extremely original argument.

“Part of the concern is not having heard from the governor in terms of how he might react to this bill, whether it would be passed in the budget or as a separate bill,” Jacque continued. “The governor would have considerable authority to dramatically reshape the bill and what it does. And, of course, he did not include this in his original budget. What he might choose to do to a standalone bill, he hasn’t weighed in on at this point. That would certainly be a significant consideration.”

Jacque also mentioned the two Republicans on the Assembly Committee on Community Development who voted against the bill and said he has heard from a couple of others who voted for it and now wish they hadn’t.

“Quite honestly, the authors themselves said they consider it a dead proposal at this point,” Jacque said. They’re still pushing me for a hearing. … I’m not exactly looking to raise false hope: Oh, look – here’s a bill that’s moving, when the reality is, especially with that price tag, it’s not going to have the legislative support to actually see the floor.”

Although he first mentioned the large “chunk of change” the bill would cost, another of Jacque’s concerns seemed to be that it wasn’t a big enough chunk. “I know the director of the arts board, Anne Katz, has talked about wanting a much larger amount of money in this proposal in terms of what their actual aim is,” he said.

“The money is never enough, but you have to start somewhere, right?” Katz said. “Yes, of course, $500,000 is hardly anything in the scheme of things, but it will be a start. It will be a start for Wisconsin to invest in its 21st-century economy.”

Katz said she has been advocating for attention to the creative economy for years now and thought, finally, someone was listening.

“We had a fantastic hearing with the Assembly Committee on Community Development in March,” she said. “We had people from around the state testify, and the committee voted to move it forward. This is what Wisconsin needs. If we’re going to be a 21st-century economy, then we need to invest in creativity. I didn’t think anyone could be against it. This is an economic-development bill. This is a bill to stimulate our economy. This is a bill to help our communities and our people thrive. It’s all about workforce development for the 21st century.”

“I was impressed that Rep. Kitchens had authored such a bill,” said Richard Baker, executive director of Kewaunee County Economic Development Corporation. “I thought, what a great way to jump-start some of our small, rural communities. We’ve been the second-fastest-growing for tourism the last two years, but from a tourism standpoint, we only do 5 percent of what Door County does. Being sandwiched between Green Bay and Door County, one would expect us to be doing at least half, maybe. I looked at it from the standpoint of economic growth. I figured there was opportunity for some of our communities to tap into this for some of the projects they want done.”

“Rep. Kitchens’ bill provides a great opportunity to stimulate job creation as well as leverage private investment,” said Jim Schuessler, executive director of Door County Economic Development Corporation (DCEDC). “DCEDC enthusiastically supports the Creative Economy Development Initiative because it truly merges economic development with the arts. We advocated for this bill during Door-Kewaunee Legislative Days and certainly hope that the Wisconsin State Senate will find this bill as beneficial as it was found to be by the Wisconsin State Assembly’s Community Development Committee.”

Just last month, Arts Wisconsin shared a new study from the U.S. Department of Commerce and the National Endowment for the Arts showing that Wisconsin’s creative industries have a $9.7 billion annual economic impact and support more than 94,000 jobs statewide.

Katz pointed out that the state’s creative workforce employment numbers are greater than the state’s beer (63,000 jobs), biotech (35,000 jobs) and papermaking (31,000 jobs) industries.

“The arts, honestly, are underappreciated for the economic activity they create. Way too often people just ignore that,” Rep. Kitchens said. “I’m very disappointed it hasn’t received a hearing. It’s a good bill. If it doesn’t go through this time, and it doesn’t look very good right now, I’ll bring it back next time and try to sell it better.”

“Everybody’s involved in the arts. That is the thing I’ve learned in this job,” Katz said. “It’s a shame that Sen. Jacque is not going to move this forward right now, but that doesn’t mean we’re not going to keep pushing for this because it is what Wisconsin needs. You’d be amazed at how many legislators actively participate in the arts, and if they don’t, their kids do. And their constituents do. It’s so not a partisan thing. The economic impact is in the billions. Nobody can argue with that. We have to do more education, that’s for sure. I don’t think people will be against it once they know more, so we’ll be happy to keep working on that.”